CHAMP SADDLES UP: Flick Reflects on Fourth Lernerville Track Title, Ready for Stampede Action on Saturday Night Flick stands as one of four Lernerville track champs and 256 cars in the pits chasing a Stampede belt buckle 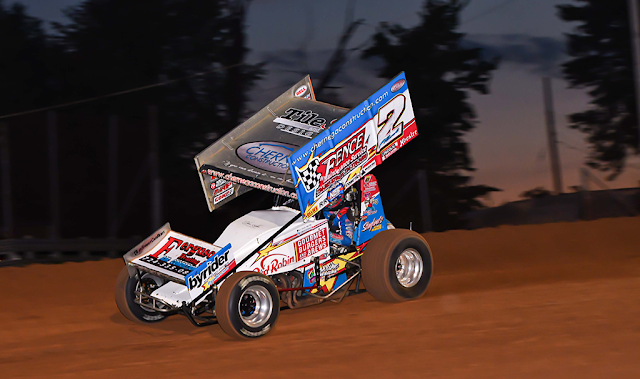 SARVER, PA – Oct. 16, 2020 – Lernerville Speedway caps off its 2020 racing season this weekend with its annual dirt track racing extravaganza, the DIRTcar Roundup Steel City Stampede, just one week after crowning its 2020 track champions.
For one of the Fab 4 title winners, it’s been a long and winding road to earning his championship gold. He and his team will be at Lernerville for the 13 divisions of Stampede Feature racing Saturday evening, PLUS the Enduro 100; spectator gates open at 3 p.m., Last Chance Showdown events kickoff the program at 4 p.m. before rolling right into Features. Or, catch all the action from your home, live on DIRTVision presented by Drydene.
Apollo, PA, is home to third-generation wheelman and now four-time Lernerville Speedway 410 Sprint Car champion AJ Flick. Flick found Victory Lane four times at The Action Track in the midst of a season delayed by pandemic restrictions. At times, many feared the racing season was over before it even got off the ground. But Flick kept hope, and was one thankful owner/driver by year’s end.
“I definitely want to give all of these speedways, Lernerville included, Port Royal, Lincoln, all the tracks that were able to come back out of the woodwork basically and, not saying ‘fight the government,’ but they were able to put regulations in place that allowed us to go racing this year,” Flick said.
Complete Chaos & Co. scored their first victory of the season on July 31, three race weeks after the regular season finally began on June 19. Starting fifth, Flick made some moves for position after several restarts and grabbed the lead with some tough customers behind him. But as all veterans of the circuit do, he was able to hold them off, including a late-race charge from Sye Lynch. Proving, once again, his proficiency around the 4/10-mile.
“It was obviously late in the year when we got our first win, but I think that was the same case for a lot of people,” Flick said. “I’m just happy that even though we didn’t get a win against Central PA guys, out at Port Royal or Selinsgrove or any place like that, at least we were able to back up some of our competition and what we were able to do here locally.”
The competition he faced that night and all throughout the season included some of the area’s finest talent, including Carl Bowser, Brandon Matus and the 2019 track champion, Jack Sodeman Jr. Flick felt that even with his experience around Lernerville, those he raced against in 2020 made he and his team work more and more each week.
“Everybody gets better, there’s no ifs, ands or buts about it,” Flick said. “It seems like every time we hit on something, maybe we’re good for a couple weeks and everybody else steps their game up. And there’s times where other people have been way quicker than us and it makes us work harder.
“That’s a lot of the reason we try and run out in Central PA, simply because you’re racing against the best, and I think that’s been proven here.”
Now with his fourth track championship in-hand, Flick’s done a bit of reflecting on what it means to see his name engraved on the trophy next to the word “champion” yet again.
“It means a lot, mainly because most years that we’ve won, we’ve just been so consistent that we stayed in the points lead the whole time and ended up just locking it up at the end of the year. This time, we got some real bad luck at the beginning of the year.
“But to come from behind, to run down the points leader and still be able to lock it up with one night of racing… we were 36 points ahead with a maximum of 40 in a night, it was pretty cool to do it in the dominant fashion that we did.”
And dominant he was, winning two more Lernerville Features right after his first breakthrough to give him three in-a-row. Capping that off with a fourth and final W just two weeks ago, Flick is ready to put the cherry atop the proverbial sundae with his first belt buckle Stampede trophy since 2016. He led his Heat Race on Friday night flag-to-flag, and he’ll be in the redraw for a starting spot on the front row of Saturday’s $3,000-to-win finale.
“Absolutely,” Flick said when asked if another Stampede win would be the perfect cap to his season. “Not only that, but just the fact that we lost a car at Port Royal as well. So, to grab a couple dollars so that we can end the 2020 season and go into next with just a little bit of financial security and start putting some stuff together [for 2021] would be pretty cool.”
Catch Flick and the rest of the Lernerville Speedway’s 410 Sprint Car field in action Saturday evening as part of the 12th annual DIRTcar Roundup Steel City Stampede. Spectator gates open at 3 p.m., Last Chance Showdown events kickoff the program at 4 p.m. before rolling right into Features. Or, catch all the action from your home, live on DIRTVision presented by Drydene.
Posted by Bill McIntyre at Saturday, October 17, 2020