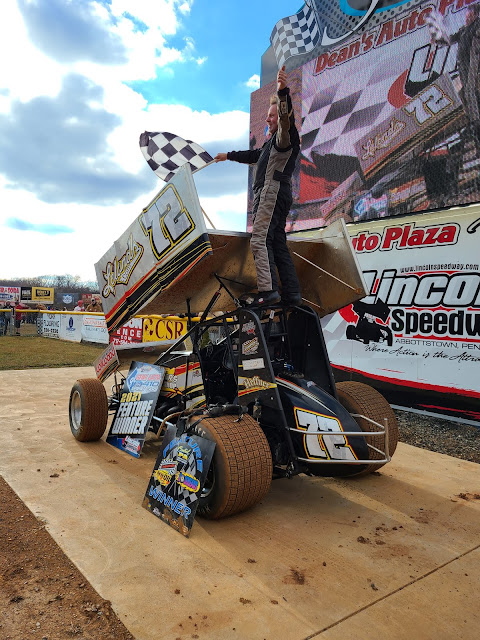 Abbottstown, PA (March 6, 2021) – Tim Shaffer has found success with car owner Mike Heffner early in the 2021 season. Shaffer followed up his impressive hard charger finish at last week’s Ice Breaker with a win on Saturday afternoon. Shaffer took the lead on lap 26 to earn his second career victory at the track.

Glenndon Forsythe started on the pole of the 30-lap feature. Missouri driver, Hunter Schuerenberg lined up second. Schuerenberg was one of two invaders to make the trip to race against the PA Posse despite the chilly weather. The second driver was Ohio-native Ricky Peterson.

After taking the green flag at the Mike Yeaple Starting Line Schuerenberg took the lead going into turn 1. Billy Dietrich used the outside line to get by Shaffer on the start for third.

The first caution of the race came on lap 1 when Chad Trout came to a stop on the front stretch. Trout stopped to alert track officials about a potential safety issue with Brandon Rahmer’s #88 machine. It appeared that the tail tank of Rahmer’s car was coming loose. Rahmer went to the pits and after assessing the situation the team decided to park the car. Trout rejoined the field.

Schuerenberg led Forsythe, Dietrich, Shaffer and Kyle Moody to the cone for the single-file restart. Hunter had a solid restart and caught the tail end of the field by lap 6.

The yellow flag waved again on lap 7 when Chad Trout had a right rear tire blow. Trout slowed on the front stretch in front of the leader, Schuerenberg, and the two made contact. Hunter had visible front wing damage but opted to stay out on the track.

Dietrich got to the inside of Forsythe for second on the restart, but the red flag came out for Steve Buckwalter who got upside-down in turns 1 and 2, in almost the same exact spot as he did last week.

On the next lap Shaffer got by Dietrich for third off the bottom of turn 2 and started reeling in Forsythe.

With significant damage to the front of Schuerenberg’s car, his lead was dwindling as the battle for second continued behind him.

Shaffer and Forsythe crossed the line side by side on lap 17 with Shaffer having the slight advantage to take second place.

Dietrich followed and took third from Forsythe as the two raced down the back stretch.

Shaffer was using the bottom line around the 3/8-mile oval with Hunter running one groove up above Shaffer’s line.

Shaffer took the lead by a nose at the line on lap 26. Dietrich once again tried to follow, but the lapped car of Dylan Norris kept him from taking second.

Shaffer crossed the line 2.409 seconds ahead of Schuerenberg for his second career win at Lincoln. Schuerenberg had a broken left front shock in addition to the damage to his front wing. Despite the damage Hunter held on to finish second. Dietrich finished third and Forsythe was fourth. Moody rounded out the top five.

Next Saturday, March 13, Lincoln Speedway is back in action with 410 Sprint Cars and Central PA Legends. Racing starts at 2PM with pit gates opening at 11:30AM and grandstand gates opening at noon.