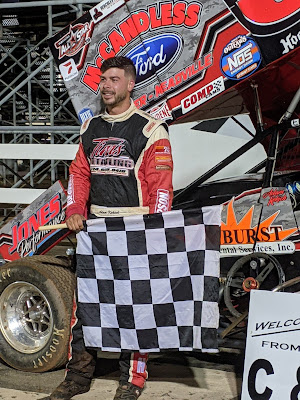 After a week off because of rain, all five class' were ready to get back to race action on White's Ford night at Wayne County Speedway. The Pine Tree Towing & Recovery Sprint feature would be led to the green flag by Trey Jacobs and Broc Martin but a caution for a spun Joe Adorjan on the first attempt to get a lap in and then another caution on lap two for Dylan Kingan and Jonah Aumend got together in turn one. Jacobs and his Performance Foot & Ankle, DAC, and Jacobs Motorsports #3j grabbed the lead on the restart as points leader Martin would follow. Racing for a top five position, Chris Myers, Henry Malcuit and Nick Patterson got together coming out of turn four on lap four to bring out the yellow flag and only Patterson would be able to continue. As the race resumed, Martin would loose control of his ride and spin while in second to cause another caution before lap five could be completed. This would give Jacobs time to build up a lead as Danny Mumaw, Ricky Peterson Dean Jacobs and Andrew Palker dueled for second. The race would go red on lap 21 when Mumaw, running second, got into the lapped car of Wyatt Zimmerman and both went flipping in turn three, ending both of their nights. With four to go, Trey Jacobs pulled away on the return to green as Peterson and Dean Jacobs dueled for second but Peterson's ride would slow with problems and stopped to bring out the caution. The final laps would see Trey keep his Dad, Dean, at bay as the Wooster driver secured his 1st win of the season as Dean finished second to his son. Palker ended up third while Zach Ames grabbed a season best 4th with Jason Dolick claiming fifth. Heat winners were Martin and Dean Jacobs.

Dave Hornikel and J R Gentry stayed side by side for the opening three circuits of the Malcuit Tavern Super Late Model main before Gentry secured the top spot on lap three. A crazy wreck on lap four stopped the action when points leader Mitch Caskey spun in turn four and with his front end facing oncoming traffic, Jerry Aber ran over the front of Caskey's car and rolled over the top of it. Aber would end up on all fours with the roof of the #24 bent. Caskey would continue as Aber went pitside. With caution flags sprinkled throught the race, Gentry kept the lead as Ryan Markham tried to close in on Gentry as Wes Morrison, Hornikel and Charlie Duncan battled for third. Markham reeled in Gentry as the El Campesino Restaurent, Skurts Custom Apparel and Under Pressure Washing #14 looked be having problems. During a lap 16 caution, track officials checked Gentry's car for a flat tire but there was none losing pressure and on the restart, pulled away from Markham, who would bring out the caution with 2 to go with a flat tire of his own, ending his second place run. Morrison moved into second at that point and finished there for his best finish as Duncan took third. Caskey worked his way back for a fourth place finish as Hornikel held on to fifth. Larry Bellman and Markham scored the heat wins.

Driving a sister car of the Kepling Floors, Arnold Motorsports and Moore Brothers Modified #1* Bellville's Colton Shaw lead all the way for his first win in the CORBON Ammunition Modified feature. Jesse Wardell and D J Cline pursued Shaw in the early laps until a caution waved on lap five. In the other MBR #11* Kyle Moore motored past both Wardell and Cline for second on the restart and quickly tracked down his team car. As the two went into turn three on lap 17, Moore tried to get to the inside of Shaw and they made contact with both spinning. Shaw would retain his lead with Moore going to the tail. Shaw pulled away from Cline in the final laps for the win as Cline held second at the finish. Moore charged back in the final laps to collect third in front of Nate Young and Wardell. Shaw and Moore topped the heat races.

Tyler Wiles set the pace for the opening four laps of the McKenzie Concrete Super Stock feature until sixth starting Kyle Moore took over at that point. Seven cars were in a dogfight for second place and Brandon Morrow and Paul Holmes got together going down the backstretch on lap 6 with Holmes getting into the dirt embankment going inti turn three ending his race. Moore would build a big lead and the Mansfield driver put the CORBON Ammunition, R C Kuhn & Sons and United Concrete #21d into the Summit Racing victory circle for the fourth time this season. Morrow recovered from his incident with Holmes to take second as Chase Alexander, Brandon Craver and Rob Melzer rounded out the top five. Moore and Holmes picked up the heat wins.

At the drop of the green flag of the JOYRIDE Transport Mini Stock feature, it looked like everyone wanted to be the leader as four wide going down the backstretch on the opening lap wasnt a good idea as pole sitter Ryan Carder ended up rolling his car after hitting the dirt embankment going into turn three. On the restart, it was a battle of Hensel's for the lead with Brad leading Doug with Johnny Bruce right behind and Loudonville's Jordan James working his way to 4th from his eighth starting position. James took third from Bruce on the 8th circuit, On lap ten, Brad Hensel pulled off the backstretch while leading as Doug Hensel's car slowed allowing James and his Ugly Duck Bar & Grill, Brad's Autobody and Lochevale Farms #83 to take the lead and drive to his sixth win of the year and expanding his O'Reilly's Auto Parts 'Race to the Championship' points lead. Bruce finished second with Mitch Reichard, Kyle Petit and David Coffin filling out the top five. Grabbing the heat wins were Doug Hensel and Steven Lester.

Drivers were once again chasing after the Contingency Connection 'Racer's Rewards' prizes for the night and yearly awards.

Next Saturday, July 31, another Fast Five program will take place plus the Vintage Auto Racing Club will have some of their cars on display.