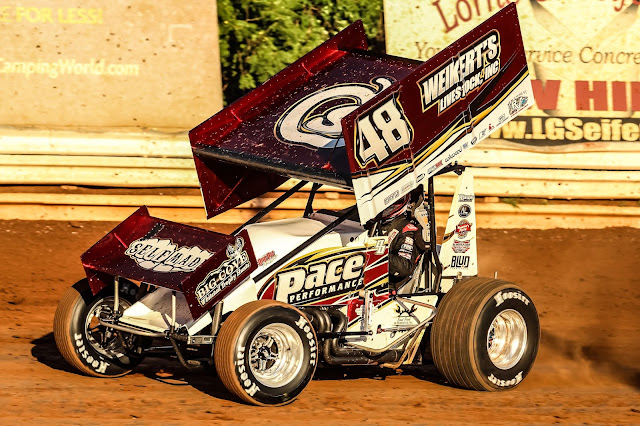 Mechanicsburg - The All Stars Circuit of Champions Sprint Cars Series returns to Williams Grove Speedway this Friday, September 17 to compete in the Union Quarries 39th annual Jack Gunn Memorial, Dirt Classic Qualifier worth $7,000 to the winner.

Run in honor of the late, former Williams Grove Speedway announcer and promoter, the Gunn Memorial Dirt Classic Qualifier will serve to crown the 2021 Diamond Series champion as the last race in the seasonal series at the track.

The sprint car winner will earn a guaranteed starting spot in Saturday night’s All Stars Dirt Classic to be held at nearby Lincoln Speedway.

The PASS/IMCA 305 sprints are also on the special Friday night racing card, slated to begin at 7:30 pm.

Fast Tees Screenprinting of Thompsontown will pay $300 to set fast time over the Gunn Memorial field.

“Sunshine” Tyler Courtney is still the man to beat on the 2021 All Stars tour and Courtney will be trying to pick up his first ever Williams Grove win on Friday.

Courtney has eight wins on the season and a more than 250-point lead in the standings over Cory Eliason of Visalia, California.

Aside from the aforementioned top three in points, the Jack Gunn Memorial is sure to bring many other touring pilots into Williams Grove including Ian Madsen, Kyle Reinhardt, Zeb Wise, Cap Henry, Justin Peck and more.

In the Gunn Memorial itself, Lance Dewease owns three victories over the years and he’s sure to be primed for a fourth aboard the Kreitz No. 69K.

The 39th Gunn Memorial will mark the 42nd appearance by the All Stars at Williams Grove since the series inception in 1970.

To date, local drivers known as the Pennsylvania Posse have claimed 36 of the shows with two shows going to independent driver Kyle Larson and three others going to All Stars driver and champion Aaron Reutzel.

Larson scored the only other Williams Grove All Stars show of the season back in April.

Adult general admission is set at $25 with youth ages 13 – 20 admitted for $10. Kids ages 12 and under are always admitted for FREE at Williams Grove Speedway.