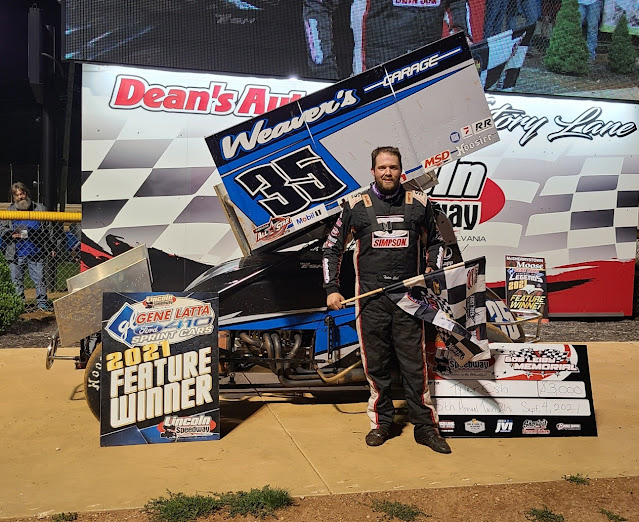 UPCOMING SCHEDULE:
Saturday, September 11 (7:30 p.m.) Super Late Models, 358 Sprints (Summer Series) plus PASS/IMCA 305 Sprints plus EMMR Track Time
Saturday, September 18 (7:30 p.m.) DIRT CLASSIC VIII presented by Schmuck Lumber Company for All Star Sprints ($20,000 to win) [rain date: Sunday, August 19]
Saturday, September 25 (6:00 p.m.) PA Karting Grand Nationals
Abbottstown, PA (September 4, 2021) – Saturday night’s Bob Leiby Memorial featured Twin 20s for the second year in a row. The first 20-lap feature went to Tyler Esh. The victory was Esh’s second at the track, and his first since 2018. Esh started the season in the 358 sprint division and recently made the switch to race 410 sprints in his own car, “We got a good race car right now.” The first order of business in victory lane was pulling the invert for the start of the second feature. The options were 8, 10 or 12 and after pulling the 12 pill Esh shared, “We’re just going to go out and be smart in the second one and whatever happens, happens.”
The night honored the late Bob Leiby, who with his brothers promoted Lincoln and Williams Grove Speedway. The Leiby family has deep roots in Central PA racing with family members that race and some that are officials at local tracks. Esh is no stranger to what the Leiby family means to racing, “It’s great to win that race. I got to race with Chandler and Greg helped us. And they were there when I got hurt here in 2014. That was pretty cool to win for them.”
Both Glenndon Forsythe and Cory Haas challenged for the lead, but Esh held them off, “Yeah that was pretty exciting from my seat.”
Esh shared the front row of the first feature with Greg Plank. Esh led the field into turn 1 with Forsythe driving under Plank down the back stretch to take second.
Haas got under Plank going into turn 3 to take second on lap 2. Haas then went to work on Forsythe for second.
The yellow flag came out on lap 5 when Jordan Givler got turned around in turn 2.
Esh led Forsythe, Haas, Dylan Norris and Plank to the cone for the restart.
Forsythe went low into turn 1 to challenge Esh for the lead but Esh held on to the top spot.
Chase Dietz got by Plank to make his way into the top five and Tim Wagaman followed.
Haas took second from Forsythe at the line on lap 7.
The following lap saw Dietz get by Norris for fourth at the line.
Haas was closing in on Esh and had Esh’s lead down to .462 seconds at the halfway point.
Haas got his nose under Esh in turn 3 and the two raced side by side for the lead at the line on lap 12.
Lapped traffic loomed ahead of the leaders as they battled for first.
Greg Plank brought out the red flag on lap 13 when he flipped in turn 2 right in front of the leaders.
The top five for the restart were Esh, Haas, Forsythe, Dietz and Freddie Rahmer. Rahmer was up to fifth from his 15th starting spot.
Haas went low into turn 1 on the restart but Esh held on to the lead running the top.
Esh got to the checkered flag .645 seconds ahead of Haas. Forsythe crossed the line third and Dietz was fourth. Rahmer completed the top five. After the top five crossed the line, the red flag came out for Aaron Bollinger who took a nasty tumble coming out of turn 4 on the final lap. Bollinger had been running 11th. 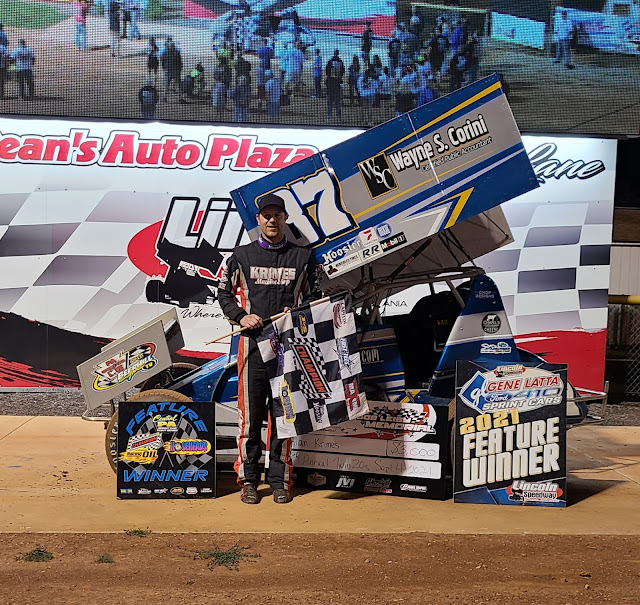