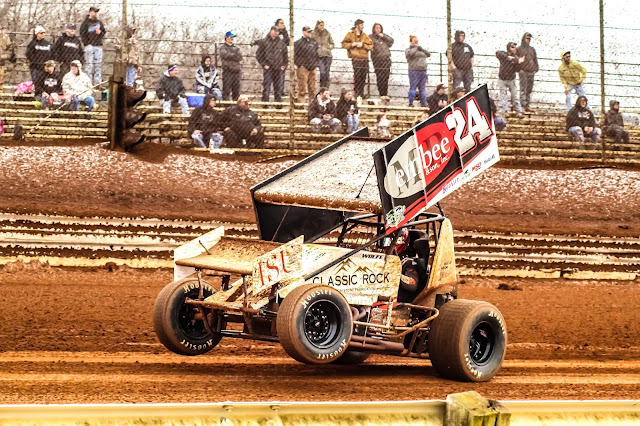 Abbottstown, PA (March 10, 2019) – For the second year in a row, Lucas Wolfe drew the pole position in the Ice Breaker redraw. This year had a happier ending for Wolfe as he parked his car in victory lane after the 30-lap feature to take home $4,000.

Lucas led all 30 laps in a feature that saw over half the field end the race in the pits instead of on the track. The first caution came at the start of the race as last year’s Ice Breaker winner, Chad Trout, got tangled with Glenndon Forsythe on the front stretch. Wolfe got a good jump over Ryan Smith on the restart and led the 23-car field into turn 1.

The leaders caught the tail end of the field by lap five with Lucas leading Smith, Danny Dietrich, Tim Glatfelter and Rick Lafferty. The top five were all running the bottom of the track and Smith and Dietrich were closing the gap as Wolfe worked his way through lapped traffic. When asked in victory lane about Smith getting some good runs on him Wolfe said it was hard to judge how close he was in traffic.

Freddie Rahmer brought out the first red flag of the afternoon on lap 16 after flipping through turns 3 and 4. Track officials opened the red flag to allow teams to add additional tear-offs. Defending track champion, Brian Montieth, tried the high side of turns 1 and 2 on the restart which turned out to be the wrong groove as he got shuffled back through the field. Thanks to Anthony Macri, who ran over the restart cone resulting in a complete restart, Montieth got his sixth-place spot back. Macri restarted at the tail-end of the field.

Montieth got around Glatfelter for fifth on lap 19 as the red flag came out again for Tyler Esh. Esh took a nasty trip down the front stretch, completely flattening his wing. Glatfelter got upside down in turn 2 on the restart bringing out the last red flag of the race. On the next restart, Chase Dietz almost lost it in the same spot as Glatfelter, but lucky for Dietz he was able to keep his wheels under him bringing out the yellow flag.

The top four, Wolfe, Smith, Dietrich and Lafferty, had pulled away from the rest of the field as they approached lapped traffic with three laps to go. Just as things were about to get interesting, the final caution of the race came out with two laps to go as Scott Fisher came to a stop on the front stretch.

Once Wolfe took the green flag one last time there was no looking back and he took the checkered flag nearly a second over Smith. Dietrich crossed the line third, Lafferty was fourth and Montieth held onto fifth.

Next Saturday, March 16, Lincoln Speedway is back in action with 410 Sprint Cars and Central PA Legends. Racing starts at 2PM with pit gates opening at 11:30AM and grandstand gates opening at Noon.