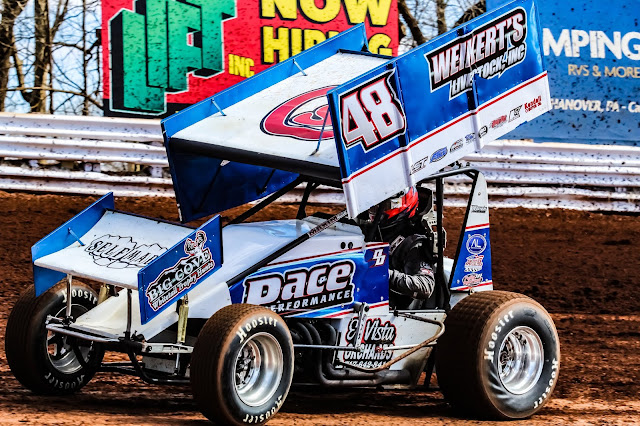 YORK HAVEN, Pa.: Danny Dietrich has taken strides in the offseason to become a smarter and improved Sprint Car driver.

His dedication has paid off. Not only has he become a more tactical driver,  it's led to more early-season wins.

That was the case Sunday at BAPS Motor Speedway. Dietrich lost the lead to Brock Zearfoss, stayed focused, and retook the top spot to capture his 12th career win at the York Haven speedway.

“I kind of had a new focus since January 1st,” Dietrich said after his third win in eight starts this season. “I’m just focused really, really hard on racing and getting myself in better shape, getting healthier, going to the gym.

“I think that’s propelled the beginning of the season. For me, personally, hopefully I can keep working on that and get back to the gym when things slow down. Racing is keeping us in pretty good shape now.”

Dietrich grabbed the lead at the drop of the green, passing pole-sitter Brett Michalski. Brock Zearfoss also dipped under Michalski and took the second spot, with Ryan Smith taking third before the completion of Lap 1.

The leaders approached lapped traffic on the eighth circuit. Dietrich dropped down to the bottom of Turn 2, which allowed Zearfoss to fly around the cushion and take the lead out of the second corner.

“I hate leading a race,” Dietrich said. “I would rather run second. I’ve told people that multiple times, and I don’t like starting in the front row.

“I don’t like setting the pace. I would rather pass someone knowing what my car has in it. You don’t know until you are in second how good you are. We weren’t the best, but we were good and had to make the most of it.”

The frontrunners got into lapped traffic on Lap 9. Dietrich was able to close and stalked Zearfoss for the next four laps.

Dietrich pounced on Lap 13. Zearfoss was attempting to get by Trey Hivner and lost momentum. Dietrich closed in a hurry and pulled off a slider through Turns 3 and 4 to regain the top spot.

“I know exactly what my mistake was, and it was the same mistake Danny made,” Zearfoss said. “I was just kind of messing around too long.

“He left the door open, and I got him. I tried to drive away, caught lapped traffic, just messing around too long. That’s the deal breaker right there. I need more laps on short tracks to gauge when to pull the slide job on somebody, so I learned a lesson and got beat by it.”

Dietrich opened up a half-straightaway lead by the halfway point. Four laps later, Zearfoss got a shot at the leader after Chase Dietz got upside down in Turn 2. Jared Esh was also involved.

After the red flag, Dietrich was able to stretch his advantage. But, Zearfoss closed again when the leaders approached a four-pack of backmarkers on Lap 29.

Dietrich took action, squeezing around Dylan Norris and Dan Shetler in Turn 2 and sped away over the final circuit to take the win by 1.928 seconds.

“They were holding their lines pretty good,” Dietrich said of the lapped cars. “I just followed them one to the other, just picking them off as I could. When the opportunity arose, I slid them in three and four.

“I hoped none of them would race me back, and they didn’t. They raced me smart, I raced smart. As a driver, you have to race smart if you are going to win, because the guy in second has the advantage.”

Esh, Eliason, and Freddie Rahmer were heat winners for the 24-car field. Dylan Norris started 24th and finished 14th to earn Hard Charger honors and received $250 from The Cushion.

Kevin Nouse started seventh and methodically made his way to the front to earn the win in the 25-Lap 358 Sprint Car main event.

Gregg Foster led the first four laps from his pole starting spot before Kyle Denmyer took the lead on Lap 5.

Denmyer was in good shape until Brett Wanner spun on Lap 14. That allowed Nouse to line up on the outside and take the lead going down the frontstretch toward Turn 1 on the restart.

Nouse never looked back and withstood two late cautions to take the win. Troy Wagaman Jr. came up to second, with Jeff Halligan, Denmyer, and Chris Frank completing the top five. Doug Hammaker and Nouse were heat winners for the 20-car field.

The 305 Sprint Car feature was postponed to April 20th when persistent rain hit the speedway.