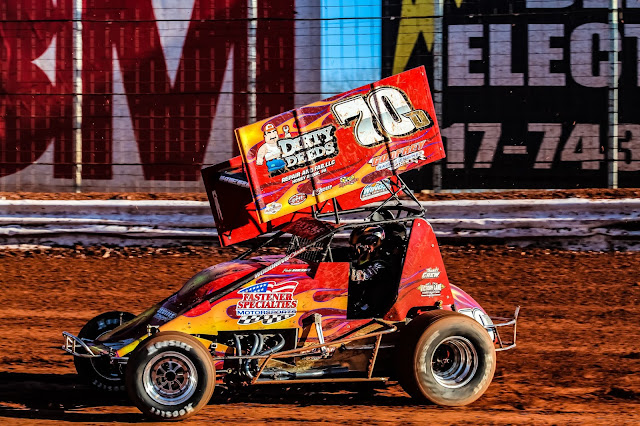 YORK HAVEN, Pa.: Frankie Herr’s message to his crew chief, Donny Rexrode, during the red flag was to the point and confident.

Rexrode wanted to know what he could do to make Herr’s second-place car better and enough to overtake leader Scott Dellinger. Herr responded, “We’ll be fine, I got him. Don’t worry, I got him.”

Herr knew what he was talking about. He blasted around Dellinger on the Lap 21 restart and sped away to victory in the 25-Lap BAPS Paints Super Sportsman main event on “Start Them All Features Only Night” at BAPS Motor Speedway.

“I knew we were good on the restarts,” Herr said. “I saw he was running the top pretty hard, and I figured there was something up there.

“I figured his guys thought maybe I couldn’t go up there, and when I saw him dive to the bottom there, I was going to do whatever it took to get up front.”

Dellinger started on the pole, which many believed meant that the rest of the field was running for second. Apparently, Herr didn’t get the memo.

Herr started 11th on the grid and methodically made his way to the front. He took advantage of a pair of early cautions and got to the runner-up spot by the time the caution was thrown on. Lap 20 for an incident involving Kenny Edkin, a two-time winner this season, and Allan Hallman.

“When you’ve got a good racecar and it’s slick as it is, it really makes it a lot of fun,” Herr said in Victory Lane. “It’s just frustrating when you are getting banged around, and guys can’t run you too awful clean.

Then came a chorus of boos directed at Herr after the statement. He followed it up with, “I appreciate all of these boos, because all that does is make us go faster.”

Herr was faster on the restart. Dellinger went to the bottom of the first and second turn, and Herr shot around the top to take the lead.

The rest of the event belonged to Herr. He went on to score his 16th-career BAPS Motor Speedway win over Dellinger, Chase Gutshall, eighth-place starter Rich Eichelberger, and 12th-place starter Mike Enders.

“I want to thank my guys a lot,” Herr said. “We were a tick off there, and Donny … He doesn’t stop working and gave me a heck of a racecar.

“I can’t give this team enough credit. They put forth so much effort and the equipment I need to do this, and I’m the one who gets to have fun.”

The only thing that slowed Whitaker’s pace was a pair of caution periods on Lap 3 and Lap 9. Still, Whitaker was able to take the checker over Matt Adams by a jaw-dropping six seconds.

Chase Billet was third, followed by Travis Mease. Daulton Bigler started 12th on the grid and came up to fifth.

Mike Walls led the first circuit before Brian Walls took over and led the next five laps. Mike Walls was back in front on Lap 7, but fifth-place starter Chad Smith went by both Brian and Mike Walls to take the point.

Smith only led three laps in the 20-lap feature. Mike Walls took command on Lap 11, before Brian Walls assumed control on Lap 14 and led the rest of the way.

Rial led the first 10 circuits before giving way to Patrick McClane on Lap 11. Two laps later, Rial was back in front and cruising to the win.

A total of 36 cars started the Legends feature, with Bill Diehl taking the lead on Lap 14 and speeding away to victory in the 20-lap event.

Zachary Settle started on the pole and led the first four laps. Scott Houdeshell started 12th and took the lead on Lap 5 thanks to a stellar charge to the front.

Diehl, who started 14th, followed Houdeshell and took the lead on Lap 14. He led the rest of the way for the victory.