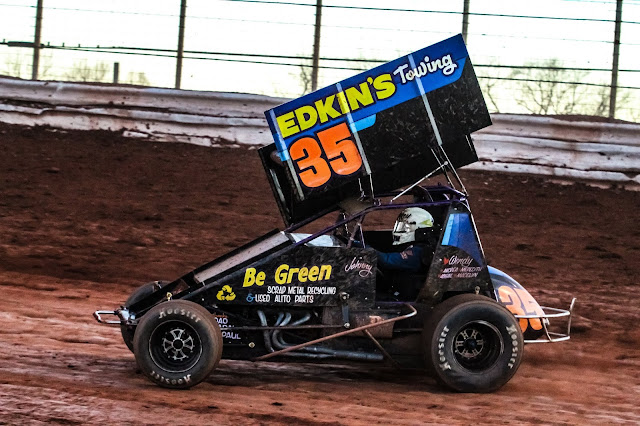 NEWBERRYTOWN, Pa.: It’s been an Edkin Family Affair through the early stages of the season at BAPS Motor Speedway.

A week ago, Kenny Edkin dominated the Opening Day field and collected the victory. That wasn’t the case Week 2, as Edkin was involved in a red-flag period and wasn’t around at the end of the 25-Lap A-Main.

But, his brother was front and center. John Edkin, who has been in the BAPS Paint Super Sportsman division for a little over a year, carried the family banner by leading every lap to collect his first career win at the Newberrytown oval.

“I didn’t expect to win this quick, not at all,” Edkin said. “The Super Sportsman division is a very, very competitive division.

“It was amazing. It’s just a shame … I was so beat after muscling the car around that I didn’t have the energy to raise hell and carry on. It was more of a catch-your-breath thing.”

As for Edkin, he started on the pole and was pinned on the bottom of the tricky speedway throughout the feature event.

Edkin jumped out front at the start, but it was tough to get a rhythm with four cautions and two red flags in the first six laps. The worst incident came on a Lap 5 restart when Kenny Edkin and Rich Eichelberger flipped in Turn 3. On the next restart, Bruce Buckwalter also got upside down.

The final stoppage came on Lap 6, when Steve Fannasy spun. Edkin led Russ Mitten on the restart and continued to be flawless in the low groove.

“My crew chief, Don — he works on both cars but primarily on Kenny’s — that was all his deal,” Edkin said. “It was kind of hard the way I had to enter the corner.

“The double-file restarts were a challenge, and the veteran [Russ Mitten] kind of rolled me on the start and got in front of me. But, that’s what he is supposed to do.

“It was one of those things that you hope you don’t see anyone’s nose inside of you. We had all those restarts and reds, and those last 20 laps seemed more than the 100-lapper.”

Edkin didn’t have to worry about another restart over the last 20 laps. He went untouched and was able to keep the competition at bay.

Paul Miller was the hard charger, storming from 19th to sixth. Kenny Edkin and Steve Fannasy were heat winners for the 20-car field.

In the Creekside Auto Sales 358 Late Model feature, Stoudt got past Chase Billet on the final circuit to claim the 20-lap victory.

Billet started third on the grid but was in front of the field by the completion of Lap 1. Stoudt started fourth and wasted little time getting into the second position.

The main event featured six caution periods, which set up a thrilling finish. Stoudt rocketed to the outside of Turn 2 on the final lap and pulled ahead of Billet. He led the final half lap to claim the win.

Will Walls took the top spot on the initial start before Ryan Smith wrestled the lead away on Lap 5. Walls regained the advantage on Lap 6, but Diehl took control on the 10th circuit.

Walls was second. Brian Walls, Eric Tripp, and Smith completed the top five. Will Walls and Smith were heat winners for the 17-car field.

Horan was the class of the Superior Homes Extreme Stock 20-lapper. He took the lead from Patrick McClane on Lap 5 and never looked back.

Joe Brown led the final five laps of the Classic Car main event. He started second and took the lead from Roland Brown.