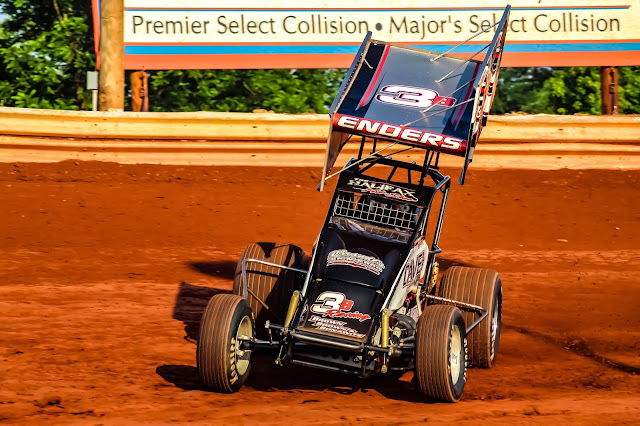 YORK HAVEN, Pa.: Mike Enders has always shown speed at the old Susquehanna Speedway, regardless of the division he was running.

When Enders was in a 358 Sprint Car, he won in 1997. Throughout the years, he was also good in the Super Sportsman class, ripping off numerous second-place finishes.

But wins have  eluded Enders in the competitive division. That is until Saturday night at Susquehanna, which is now BAPS Motor Speedway.

Enders surged past a pair of fellow competitors early in the 25-lap affair. From there, he held off a late challenge and scored the victory in the BAPS Paint Super Sportsman division.

“I’ve always been pretty decent here, even in the 358,” Enders said after his first career BAPS Motor Speedway win in the Super Sportsman division. “When the Sportsman were at Williams Grove, we would do the tour, and every time we went to Susquehanna, I was always fast but couldn’t get that win.

“Ever since they took over, the track configuration changed a little bit, and since they put the new clay down, man, I’ve been struggling. It’s been frustrating, so it’s a nice relief to get a win.”

Enders started third on the grid and followed Tyler Wolford and leader Tom Wyckoff for the first two circuits before the caution was displayed.

Two more cautions occurred on the restart, which slowed Enders pace. The trio ran under a blanket for three more laps before Enders surged past Wolford and Wyckoff on the fifth circuit.

“The track was tackier than I thought it was going to be,” Enders said. “All season long, we’ve been struggling with the slick track and trying to get the car tight. Last night, it had a lot of grip.

“I was trying to finesse the car, and the track had more grip, and I kept screwing up. I barreled into Turn 1 and got by Wolford, and then on the backstretch, got beside Wyckoff. In three and four, I passed him and led the rest of the way.”

Wyckoff’s night came to an end when he flipped hard on Lap 5. he was OK. Scott Dellinger, who was also running in the top five, was also involved and went to the pit area. He fixed his car during the red flag and rejoined the field.

Enders paced the field when the race went back to green. He was on cruise control until the final caution was displayed on Lap 15 for Bruce Buckwalter Jr., who spun.

Justin Foster was beside the leader on the restart and challenged as they drag raced down the frontstretch. But, Enders was too much through the first and second corner and led the final 10 circuits for the win.

“It always feels good to get back to Victory Lane,” Enders said. “The last win I had in anything was three years ago, and that was at Lincoln Speedway. I think we had six seconds since then, so it’s definitely a relief.”

Chase Gutshall and Foster battled for second late in the event and got together. Gutshall took the position and maintained it for the rest of the race. Foster slipped to 15th in the final feature rundown.

Frankie Herr came from 12th to third, with Kenny Edkin finishing fourth. Russ Mitten was involved in an early incident and came back through the field to finish fifth and earn the ArtWerks Cool Move Award. Mitten, Edkin, and Gutshall were heat winners for the 25-car field.

John Walp started on the pole and wired the field to capture the 20-lap PASS/IMCA main event.

There were two cautions over the race distance, but that didn’t slow Walp’s pace. He took the win over Jaremi Hanson, Larry McVay, sixth-place starter Doug Dodson, and Zach Newlin.

Nick Sweigart was the ArtWerks Hard Charger, as he charged to 14th from his 23rd-place starting spot. Dodson, Johnny Scarborough, Ken Duke Jr., and McVay were heat winners for the 32-car field. Kirsten Hess won the consolation.

Jason Townsend took the lead on the second circuit and led the rest of the way to earn the win in the Morgan Paving/Aqua Fun Pools, MJR Equipment.com Street Stock 30.

Kyle Saylor jumped out front on the start and held the lead until Townsend charged into the top spot on Lap 2. From there, he paced the field until the checker for the prestigious victory.

Jasen Geesaman finished second. He was followed by Saylor, Kory Sites, and Greg Diehl. Brian Walls finished sixth and was ArtWerks Hard Charger. Geesaman was quick time with a lap of 20.31. Townsend, Saylor, and Russ Shoop were heat winners for the 28-car field. Eddie Richards won the consolation.

Alex Upegraff  topped the field in the Superior Homes Extreme Stock main event. He took the lead fromMatt Adams on Lap 13 and never looked back.

The 20-lap main event had five leaders and featured six caution flags. Adams led twice before being passed by Updegraff, who was also the hard charger.