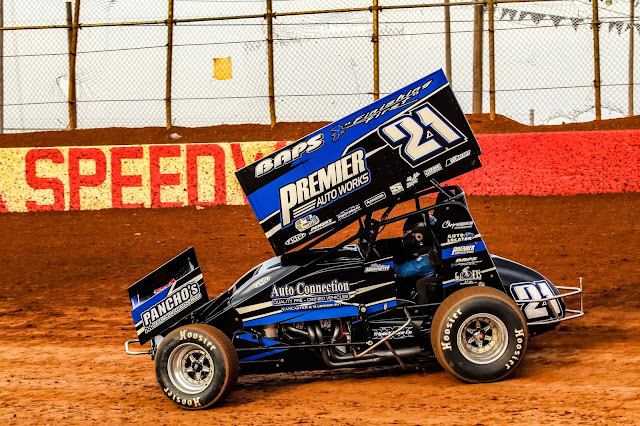 Abbottstown, PA (May 11, 2019) – For the second week in a row Lincoln Speedway officials made the decision to push the start time up two hours to try and beat Mother Nature. Luckily with four features to run, the move worked this Saturday with the rain beginning to fall as Robbie Kendall pulled his car into victory lane after the fourth feature.

Going through the Lincoln Record Books, one would need to go back to 2014 to find a year it took Brian Montieth longer to find victory lane. In 2014 Montieth waited until May 31st to earn his first win of the season. Montieth earned his first victory of 2019 on Saturday night during the $4,000 to win World of Outlaws tune-up.

Montieth started on the pole of the 25-lap feature, with Alan Krimes to his outside. Krimes used the top of the track to take the lead as the green flag dropped. Third starting Danny Dietrich started to go to work on Montieth for second. The leaders hit lapped traffic on lap 4.

Typically, more comfortable running the top of the track, Montieth tried the bottom to get by Krimes on lap 5. It looked like it worked until Montieth got held up by a slowing car allowing Krimes to keep the lead.

Montieth dove to the bottom of turn 3 on lap 7 to try and get the lead and it was a drag race to the flag stand, but Krimes held him off again. Any momentum Montieth could carry from the front stretch going into turn 1 went away coming out of turn 2 until lap 10. Montieth got under Krimes in 1 and 2 on lap 10 and made it stick. Dietrich followed to take second.

Dietrich was getting a great run off of turn 2 to keep pace with Montieth. Montieth narrowly split two lapped cars battling for position on lap 13 to put them between him and Dietrich. As Dietrich worked on the lapped cars Montieth was able to pull away.

Freddie Rahmer had gotten by Krimes for third on lap 14 but Krimes didn’t let him out of his sight. Krimes got Rahmer back on lap 23 as Rahmer got caught behind a lapped car.

Montieth beat Dietrich to the checkered flag by .635 seconds to win the non-stop feature. Not only was the feature non-stop, it was record setting. Total running time was 6:19.113, the fastest 25 laps on record at Lincoln Speedway. Krimes held onto third. Rahmer crossed the line fourth and Anthony Macri completed the top five. 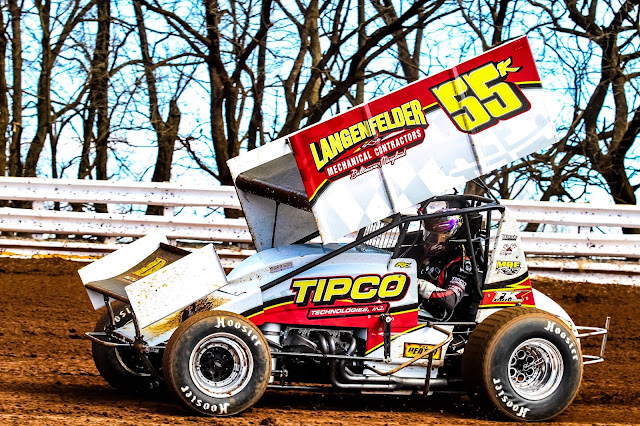 Robbie Kendall started on the pole of Saturday night’s make-up feature from last week’s rain-shortened event. Bradley Howard started on the outside of row one.

Kendall was out to the lead when the green flag dropped and had nearly a four-second advantage over Howard by lap 4.

Scott Fisher and Trey Hivner battled for third early in the race with Hivner taking the spot-on lap 4. Kendall hit lapped traffic on lap 5 but it didn’t slow him down.

Anthony Macri had worked his way up to third from his eighth starting spot by lap 8.

Kendall’s lead was over 5 seconds by lap 11. Freddie Rahmer was running fourth after starting ninth by lap 12 and started to work on Macri for third. Rahmer tried a slide job to take the spot from Macri on lap 13 but couldn’t make it stick.

The caution flag came out on lap 13 for Hivner when he got spun around in turns 3 and 4. Hivner was running fifth when he brought out the caution. The caution wiped away Kendall’s 4.9 second lead over Howard.

Macri was all over Howard for second on the restart and took the spot after getting under Howard in turns 3 and 4. Rahmer followed on the next lap and took third from Howard.

Dietrich moved up to fourth on lap 15 and started to work on Rahmer for third. As the top four, Kendall, Macri, Rahmer & Dietrich, ran the top line around the track they started to pull away from the rest of the field.

Rahmer tried to the bottom of the track on lap 19 but couldn’t make a move to get around Macri. The leaders hit lapped traffic with five laps to go. Dietrich got around Rahmer for third on lap 21. Rahmer made a run for the third spot on lap 23 but couldn’t beat Dietrich bag to the flag stand.

The caution flag came out with one lap to go when Macri got turned around in turns 1 and 2 after making a move for the lead.

Kendall led the field to the cone for a one lap shoot out. Rahmer got under Dietrich in turns 1 and 2 on the restart to take second with Kendall holding onto the lead. 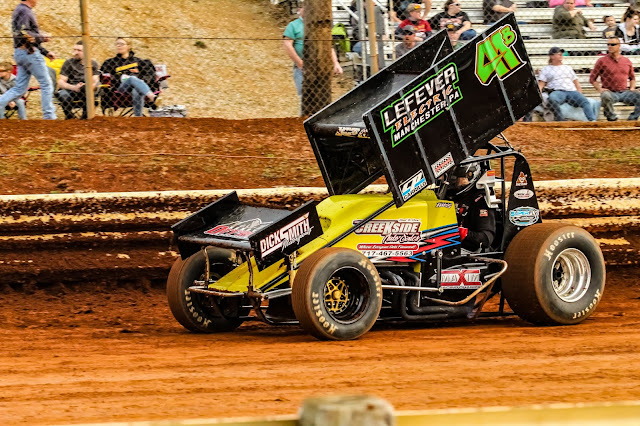 Tyler Ross didn’t have an easy path to victory on Saturday night starting eighth in the 20-lap main event. Zach Allman started on the pole with Travis Scott on the outside of the front row.

Scott was out to the with Allman and Cody Fletcher drag racing for second, with Allman holding on to the spot.

Ross had worked his way around Matt Findley for fourth on lap 5. Doug Hammaker followed to take fifth from Findley.

The caution came out on lap 8 for Alyson Dietz when she got sideways in turn 2. Dietz rejoined the field.

Scott led the field to the cone for the single file restart with Allman in second, Fletcher running third and Ross in fourth. Ross went to the top on the restart and was up to second after getting around Fletcher in turns 1 and 2 and Allman in turns 3 and 4.

Ross then tracked down Scott to battle for the lead. Scott held onto the lead by a nose on lap 10 but Ross took the lead coming out of turn 2 on lap 11.

Dylan Orwig brought out the caution on lap 11 when he got turned around in turn 3. This time Ross lead the field to the cone. Ross held onto the lead and started to pull away from the field as Hammaker went to work on Ross for second. Scott was running the top of the track while Hammaker was working the bottom.

With Ross pulling away and Scott and Hammaker battling for second, Jeff Halligan worked his way through the field. Halligan was running sixth after the restart on lap 12 and moved up to fifth on lap 13. With two laps to go Halligan was up to fourth.

Hammaker finally got around Scott with a slide job in 3 and 4 to beat him to the white flag for second.

With 18 midgets signed into the pits at the start of the night the decision was made to run a feature only program. The field was timed during warm-ups with the top six inverted for the feature line-up.

The invert put Eric Heydenreich on the pole of the 20-lap feature with Shawn Jackson on the outside of row 1. By the time cars were rolling onto the track for the main event, 21 midgets made the call.

Jackson was out to the lead from the outside of row 1 when the green flag dropped. Buckwalter was up to second from his fourth starting spot in one lap with Kameron Morral holding onto third. Ryan Smith got around Morral on the backstretch for third on lap 2.

Steve Drevicki got around Eric Heydenreich on lap 4 for sixth. Alex Bright, a late addition to the line-up, started at the rear of the field and had worked his way up to 10th by lap 6.

Buckwalter tried a slide job on Jackson for the lead in turns 1 and 2 on lap 7 and it worked. The caution came out on lap 8 for Rich Heydenreich as he slowed on the track.

Buckwalter led the field to the cone for the restart with Jackson, Smith, Tommy Kunsman and Morral nose-to-tail behind him.

Jackson tried the bottom on the restart, but he ended up getting chased down by Smith down the backstretch with Smith taking the second spot.

Bright continued to work his way through the field and was up to seventh on lap 11 and made it to sixth on lap 13.

Buckwalter and Smith pulled away from the field as they hit lapped traffic on lap 14. Smith closed the gap and worked on Buckwalter for the lead. Kunsman battled Jackson for third but couldn’t find a way around him for the position.

Buckwalter held onto the lead by a car length for the win. Smith crossed the line second. Jackson finished third. Kunsman was fourth and Drevicki rounded out the top five.

This Wednesday, May 15, Lincoln Speedway is back in action with the World of Outlaws Gettysburg Clash for the 410 Sprints. Racing starts at 7:30PM with pit gates opening at 2:00PM and grandstand gates opening at 4:00PM.