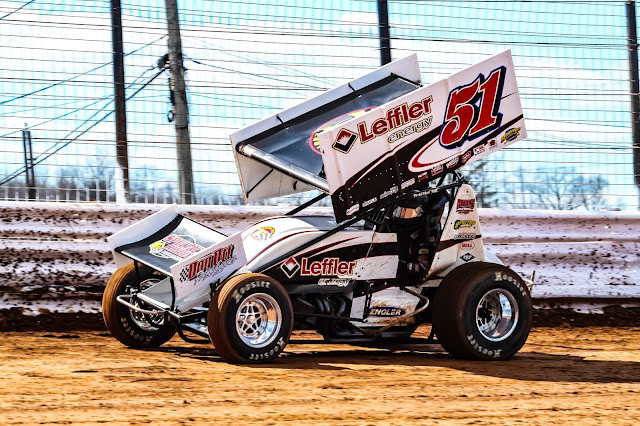 Rahmer collected $4,771 for the victory, the seventh of his young career at the oval.

In the 358 sprint feature, Jeff Halligan took the lead from Rodney Westhafer late to pick up his second career speedway win.

Rahmer drove to his win from the pole of the main that honored former three-time track champion Paxton of Dillsburg.

He began the main with Danny Dietrich to his outside and got the drop on the field at the initial green.

Dietrich tried to keep Rahmer close but as the race wore on Rahmer just continually stretched his advantage over the field.

He entered the rear of the field on the seventh tour as the field strung out all around the track.

With five laps to go, Rahmer had a straightaway lead over a struggling Dietrich in traffic.

The advantage in the end was 4.846 seconds for the Salfordville speedster.

“It was kinda’ a crapshoot where we’d run,” Rahmer noted about his choices of lines around the speedway as the race began.

Rahmer praised the track for the lucrative payoff while questioning a 19-car field for the event.

Heats went to Dietrich and Rahmer while Wolfe recorded fast time over the field with a lap of 17.271 seconds while collecting $300 from Fast Tees Screenprinting for his efforts under the clock.

Rodney Westhafer led from the pole at the start of the 20-lap358 sprint main while Cody Fletcher gave chase early.

Jeff Halligan started sixth in the field and worked into second with four away.

But by that time Westhafer had built a comfortable lead but a lone yellow flag in the event with six laps down gave him a clear shot at the leader.

Once able to start with the leader, Halligan stayed close to Westhafer and dogged him until lap 13 when he took the lead coming out of turn four.

Halligan then handled the field the rest of the distance while seventh starter Doug Hammaker worked his way to the front, getting by Westhafer for second with two laps to go but failing to catch the leader.

Westhafer held on for third followed by Fletcher and Scott Fisher.

Heats went to Wanner, Fisher and Norris with Denmyer taking the consolation race.