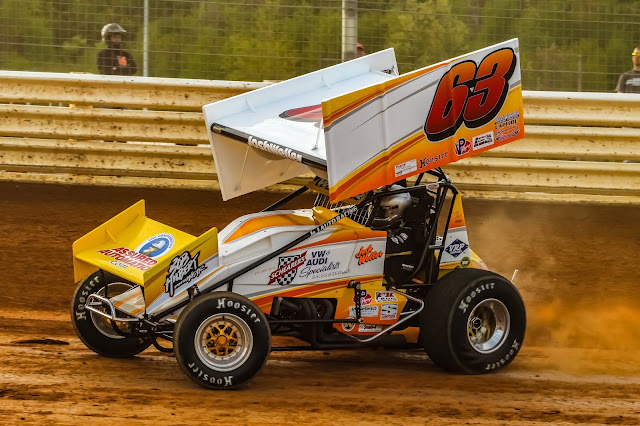 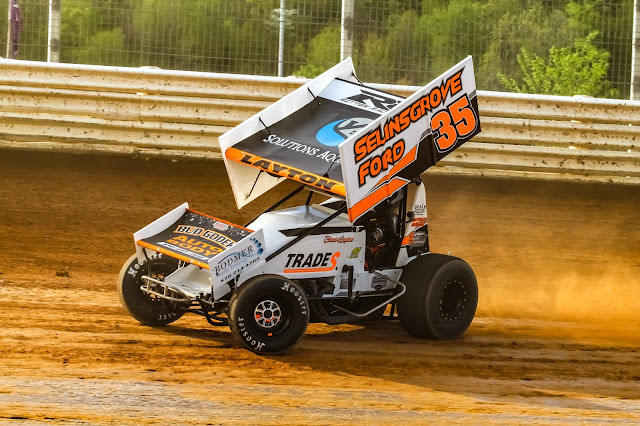 Although it rained for the eighth consecutive Friday in Bedford, this time it cleared off in time for the Bedford Speedway to get the first Friday program of the 2019 season completed.  Chad Layton and Josh Weller were the big winners in the double URC events, one which was itself a rain makeup event from 2018.  Matt Parks went pole to pole to score his first Bedford Limited win in several years while Nick Bechtel took the Pure Stock event,  and Jonathan Taylor rallied late to capture the Emod 20 lapper

Josh Weller started on the pole and wired the field, seemingly on his way to an easy win in the URC event.  Over the first 21 all green flag laps he opened up almost a half lap lead on second place Chad Layton and third runner Curt Michael.

But things unwound for Weller on lap 21 as the motor in Bryn Gohn’s 22 car came apart on the front stretch, bringing out the only caution of the event.  Weller’s day also went up in smoke at that point as he came to a halt with a flat tire in turn two.

On the restart, Layton, the new leader, easily outran the field over the last four laps to score his first ever Bedford win.  Michael, Derek Locke Jason Stultz and Troy Betts completed the top five.  Aided by the long yellow for the track cleanup on lap 21, Weller roared back to finish ninth.  Bettis and Weller won the heats.

In the second URC feature, rained out from last August, Weller received redemption.  He again started on the pole and stretched out a huge margin over the field.  With no  lap 21 hex in a race that ran straight through,  Weller easily won over Curt Michael, Layton, Locke and Shultz.  Weller and  Justin Whitsell had won the heats for that event last summer.

All told the URC cars ran 50 feature laps with only the one caution for Gohn slowing the events.

Former Late Model star Matt Parks made a return to Limited action worth is as he wired the field in that 20 lap event.   He boomed out to an early large lead but in the waning laps Spike Moore was closing.  Moore had taken second spot from Clinton Hersh on lap 16, and as Parks became mired in late race lapped traffic Moore closed dramatically.

The event’s only yellow with two laps to go closed the field on the leader, with Moore second,  but after an exciting rally, Moore settled for second at the line.  Hersh, Dalton Bigler and Curtis Heath completed the top five.  Brad Feight and Heath won the heats.

Drake Troutman was the early EMod leader but he was shadowed from the start by Mike Altobelli Jr and Jonathan Taylor.  The three ran as a group at the front of the field but the order did not change even as they ran in heavy lapped traffic by lap 12.  A multi-car crash which resulted in a red flag on lap 15 changed everything though.

On the restart, Troutman led but Taylor discovered the far outside groove.  He passed Altobelli on lap 17 and then swept by Troutman as the field took two to go.  Taylor then rushed to the win followed by Troutman and Altobelli.  Bill Pluta came from 15th starting position to take 4th ahead of Amber Mills.

The Pure Stock finale started with a bang as Dalton Weyant got sideways in front of the field on lap one and a huge chain reaction crash ensued causing a long red flag period.  When things got going, Nick Bechtel had the lead with Josh Frankenberry in hot pursuit.  For the 15 laps the pair ran door to door and bumper to bumper but Bechtel held on for the win.  Frankenberry was second ahead of Kyle Deneen, Barry Weyandt and Tim Brown.  Dalton Weyant and Deneen won the heats.