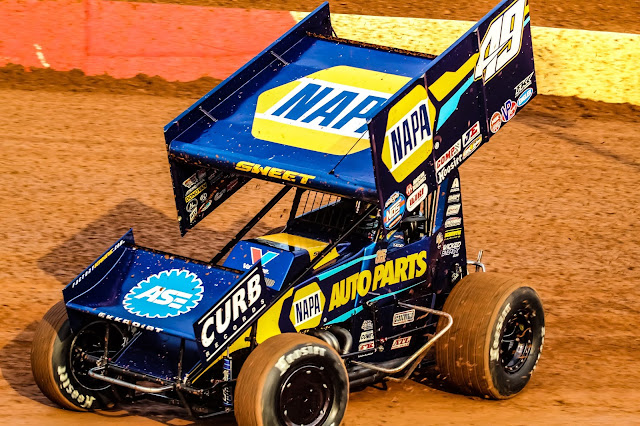 A rapid of blood forced its way through hearts of thousands. Beats per minute spiked to the redline.

Leader Brad Sweet hit the cushion exiting turn four at Granite City Speedway Saturday night, launching his NAPA Auto Parts No. 49 car several inches off the track. With David Gravel breathing down his neck, he was about to lose a jackpot of a night.

Not only was he en route to claiming another World of Outlaws NOS Energy Drink Sprint Car Series win, after four podium finishes in-a-row, he was destined to reclaim the points lead due to points leader Donny Schatz not finishing the race.

His error sent a wave of shock, excitement and qualm among the crowd.

Under Sweet’s helmet, there was nothing but focus. No shock. No thrill. No qualm. His heart, beating as normal – as normal as a heart does in a 900hp Sprint Car.

“I’ve been on the tour long enough that I don’t let the emotions get to me,” Sweet said.

That mentality led to him overcoming his mistake and claiming his third Series win this season at the Sauk Rapids, Minn. speedway – his 37th career Series win overall. And the points lead.

“I was bound and determined I think to win that one,” Sweet said. “I’m just happy to get the win.”

At the start of the 35-lap Feature, Sweet was a cheetah among kittens. He rocketed by polesitter Gravel for the lead on the initial start and pulled away by half a track.

Sweet caught lap traffic by Lap six and was lapping up to 14th-place by Lap 15. There was no catching the blue and yellow Kasey Kahne Racing car.

However, once the race reached the halfway point, Gravel began to reel Sweet in. The obstacle course of lap cars Sweet had mastered became a cluster of road blocks.

On the following restart, Gravel snuck underneath Sweet, slid up in front of him in turn one and launched to the lead.

“I just spun my tires,” Sweet said. “I was too anxious to make sure I got the jump. Once you get spinning there’s really no way to get your tires back.”

Sweet wasn’t ready to let another win slip away. He followed Gravel’s tracks, riding the high side of the speedway, keeping the Jason Johnson Racing No. 41 in sight.

With seven laps to go, Gravel bounced his car off the cushion exiting turn four, drastically killing his speed. Sweet then threw his car underneath Gravel going into turn one and slid back in front of him.

Sweet's next trip around turn four crashed a wave of shock, excitement and qualm into the crowd. He hammered the cushion, sending his front end toward the wall. While he wrestled to stay off the white barrier, Gravel turned back underneath Sweet and reclaimed the lead.

Sweet was bound and determined, though.

With a Hail Mary slide job, he hurled his car to the bottom of the turn one and slid up in front of Gravel exiting turn two. The lead was his. And in the next few laps, the win was, too.

“All you can do is try your hardest and sometimes when you over try bad things happen,” Sweet said about having to rebound from hitting the cushion. “I thought we had the superior car, so I was frustrated with myself I was even in that position. But it played out right. You’re going to win some of those. You’re going to lose some of those. Luckily, tonight we got the win.”

When Sweet sped away with the lead, Gravel was left having to defend second from a hard charging Logan Schuchart in third-place.

“It was a good effort. It was a good race,” Gravel said. “He (Sweet) just pulled away from us early, but I kind of let him go and hopefully I was going to be better than him.”

Schuchart claimed his fourth win of the season Friday night at River Cities Speedway to become the winningest driver, so far, this year. However, he said then his team still needed to put together consistent podium finishes. Saturday night’s third-place run was a good start to that.

Sweet’s consistency of five podium finishes in-a-row has led to him holding a 12-point lead over, now second-place, Schatz. He doesn’t let the emotions of battling for the points lead get to him either.

“Honestly, I don’t pay much attention to the points,” Sweet said. “I don’t want Donny to have a 200-point lead because our goal is to win the championship. But I also know that there are stretches of races that if you’re not running good the points can shift so much.

“At the beginning of my career with the Outlaws, I would look at the points after every race. Now I’m lucky to look at it every three or four races and kind of see where things are at. I know if we’re running good and (Schatz) is behind us we’re going to be gaining. If he’s in front of us every night, then he’s going to be ahead of us. The points will take care of themselves. We’re 26 races into an 80-race schedule. Really, June, July and August are what set the tone for the points. Honestly, we just want to win races.”

They’re bound and determined to do so.

The World of Outlaws next heads to the iconic Knoxville Raceway on Friday, June 14, and Saturday, June 15.