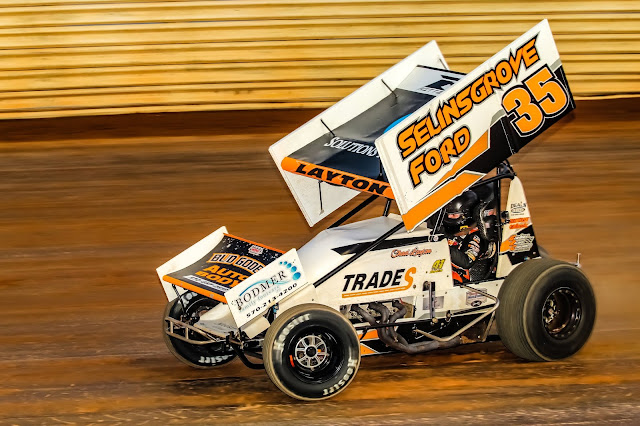 POTTSVILLE, PA – Chad Layton cruised to his second victory of the season during a caution filled feature Friday night in the club’s second appearance at Big Diamond Speedway. This race kicked off a double header weekend for the United Racing Club, joining the Kramer Cup at Selinsgrove Speedway on June 22, 2019.

Jimmy Stitzel and current URC point leader Layton shared the front row and led the field to the green for the 25-lap feature. However, the green was short lived as after one completed lap Todd Gracey found himself wheels side up in the middle of turns 3 and 4 – driver was ok. Adam Carberry tried to continue the race but pulled off after a jumble ensued on the attempted restart.

The field bunched up and the green flag once again waved, but the red was quickly displayed when the 74 of Keith Wetzel flew out of the park over the turn 4 fence. Wetzel emerged from his car uninjured and the race continued on. Once again, the red flag would fly as Mike Walter II took a tumble and though the driver was ok, the car was unable to continue.

The final caution of the night flew when Ryan Stillwaggon and Keith Prutzman came together and hit the turn 2 tires around the perimeter of the track in what would be a very scary incident. Fortunately, both drivers were able to walk away from their sprint cars under their own power.

The numerous cautions allowed drivers such as Davie Franek, and Josh Weller a shot at the win but Layton would once again come out on top in his Selinsgrove Ford number 35. Franek, Weller, Jason Shultz, and Eddie Strada completed the top five. With this win, Layton is now 80 points ahead of Weller in the hunt for the 2019 URC Championship.

The United Racing Club will be at Selinsgrove Speedway for the Kramer Cup on Saturday, June 22, 2019 to round out the weekend.