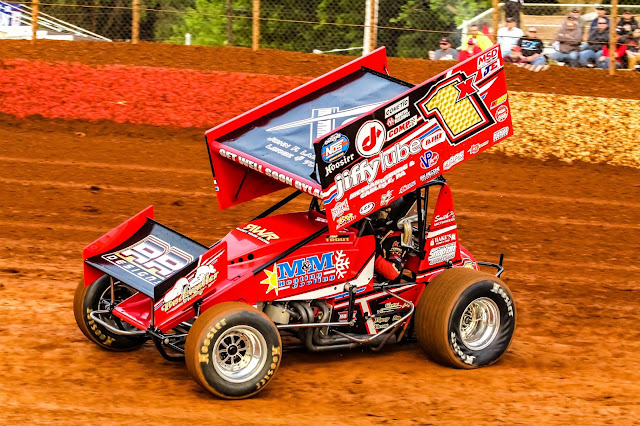 Trout started on the pole with Australian, Darren Mollenoyux on the outside of row 1 at Lincoln Speedway on Saturday night for the Kevin Gobrecht Memorial. Brian Montieth lined up third with Danny Dietrich, who swept both Speedweek races at Lincoln in 2018, starting fourth.

Mollenoyux took the lead when the green flag dropped with Trout running second and Montieth running third. Friday night’s winner Lance Dewease got up to fifth from his seventh starting spot. Dietrich moved into third on lap two after getting under Montieth in turns 1 and 2.

The leaders caught lapped traffic on lap 7. Trout nearly beat Mollenoyux to the line for the lead on lap 8. Trout took the lead on lap 9 coming out of turn 4. The top five were running under a blanket with Mollenoyux challenging Trout to take the lead back. Mollenoyux got Trout back at the line on lap 14 for the lead. Trout passed him back the next lap with Dewease, Montieth, Ryan Smith and Dietrich battling for third.

Smith was coming on fast when the yellow came out on lap 16 for Landon Myers who slowed on the track.

Trout got a good jump on the restart with Montieth going to the bottom to try for second. Smith got around Dewease in turns 1 and 2 for fifth.

Montieth was coming on strong and tried a slider lap 22 in turns 1 and 2 and nearly took himself and Trout out. Montieth was all over Trout as they approached lapped traffic on lap 23.

Montieth got Trout going down the backstretch on lap 24 for the lead and Dietrich followed. The caution came out on lap 25 for Dewease who ended up facing the wrong way on the front stretch with a right front flat tire.

Montieth led Dietrich, Trout, Mollenoyux and Smith to the cone for the restart with five laps to go.

Montieth was battling engine issues and was only firing seven cylinders for much of the race and Dietrich hunted him down. Dietrich tried to take the lead in turns 3 and 4 on lap 27 and took out Montieth and himself. The red flag came out for Montieth who took a wild ride in turn 4 as a result of the contact with Dietrich.

Trout inherited the lead and held on to the spot for the final three laps to win his second career 410 race and the $7,000 check. Mollenoyux crossed the line second. Smith finished third. Freddie Rahmer finished fourth and Cory Haas finished fifth after starting sixteenth.

Travis McClelland started on the pole of the 20-lap feature with Zach Smith sharing the front row. McClelland took the lead when the green flag dropped as Brian Racine challenged Smith for second. Racine took second as Smith got shuffled back to fourth.

With McClelland out front the battle behind him for position was heated as positions four through ten were running under a blanket. Jeremy Ott was running in the top five from his eleventh starting spot after only five laps.

The caution came out on lap 6 for Brian Racine who got spun around in turn 2 while running third.

McClelland led Mason Chaney, Alex Robinson, Harlon Leppo and Ott to the cone for the restart. Chaney was on McClelland’s bumper on the restart with McClelland holding onto the lead.

The caution came out again on lap 9 as Chaney lost a fender and made contact with the leader, McClelland, in turn 4.

Chaney led the field to the cone for the restart and spun out in turn 2 bringing out another caution.

Robinson inherited the lead with Leppo, Bill Diehl, Ott and Chris Transeau in line behind him.

Leppo challenged Robinson for the lead on the restart with Robinson holding onto the position. Leppo, Diehl and Ott made it a three-way battle for second with Ott taking the spot-on lap 11.

Ott chased down Robinson to battle for the lead with Diehl in tow. Ott ran wheel to wheel with Robinson in turns 3 and 4 on lap 16 taking the lead at the line on lap 17.

Robinson got spun around in turns 3 and 4 on the next lap bringing out the caution.

Ott led the field to the cone for the restart with three laps remaining. Diehl was on Ott’s bumper, challenging him for the lead. Diehl tried the top of turns 1 and 2 but couldn’t get a run to make the pass. Ott held onto win with Diehl crossing the line second. Leppo finished third. Aaron Updegraff was fourth and Transeau completed the top five.

Saturday night’s win was Ott’s second Legend’s win in a row at Lincoln.