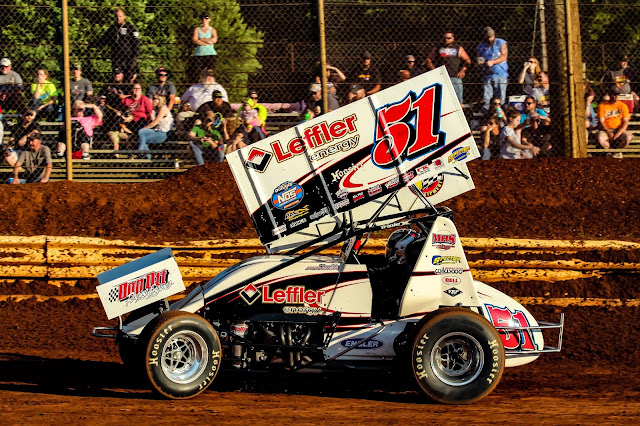 Abbottstown, PA (June 22, 2019) – Freddie Rahmer scored his third victory of the season at Lincoln on Saturday night taking home $5,000. Saturday’s race was the annual Fallen Firefighters Night in Memory of Brandon Little. Opening ceremonies included firetrucks, blessing of the helmets and a video remembering fallen firefighters on the new jumbotron.

Rahmer lined up third for the 33-lap feature behind pole-sitter Danny Dietrich and Adam Wilt.

Dietrich went to the top of the track to take the lead on the first lap while Rahmer got under Wilt down the backstretch for second.

As Dietrich caught the tail-end of the field on lap 6, Rahmer was closing in. Rahmer took the lead in turn 4 on lap 7. Dietrich tried to take the lead back coming out of turn 2 but Rahmer held the spot.

When Rahmer struggled to get by a lapped car, Dietrich would get within striking distance. Once Rahmer made the pass he would pull away as Dietrich worked on getting around the same car.

On lap 17 Rahmer was stuck trying to put two cars battling for position down a lap with Dietrich closing the gap. The caution came out on lap 18 for Chad Trout and Brian Montieth in turn 4. As the leaders came around it was a close call as they nearly avoided the stopped cars.

Rahmer led Dietrich, Cory Haas, Adam Wilt and Alan Krimes to the cone for the single file restart. Rahmer went to the bottom on the restart with Dietrich trying the top. Rahmer held onto the lead in turns 1 and 2. Dietrich made a move for the lead in turns 3 and 4 to no avail.

Despite bouncing off the wall in turn 2 on lap 20, Dietrich held on to the second spot.

Haas and Macri were battling for third when contact was made sending Haas into the wall in turn 2. The red flag came out on lap 21 as a result of the wreck.

This time it was Rahmer leading Dietrich, Macri, Krimes and Wilt for the restart.

Rahmer went to the top of the track with Dietrich diving low on the restart. Rahmer once again held onto the lead. Jim Siegel made his way up to fifth on the restart after starting twelfth.

The leaders were running against the cushion at the top of the track when the caution came out on lap 27 for Wilt and Montieth in turn 1.

Dietrich tried a slide job in turns 1 and 2 on the restart but couldn’t make it stick. Siegel got around Krimes for fourth.

Rahmer held on to the lead and beat Dietrich to the line by .738 seconds. Macri crossed the line third. Siegel finished fourth and Krimes completed the top five.

CJ Tracy found himself back in victory lane for the second year in a row on Fallen Firefighters Night at the track. It was Tracy’s third career win at the speedway.

Tracy started on the pole of the 20-lap feature with Kyle Denmyer to his outside. Tracy took the lead when the green flag dropped. Zach Euculano and Dylan Norris were battling for third down the backstretch on lap 1 when the caution came out for Chris Frank in turn 2.

Troy Wagaman got up to fourth on the restart after starting sixth. Wagaman, running the top of the track, was up to third by the second lap.

The caution flag waved again on lap 5. This time it was for Cody Fletcher after he spun around in turn 1.

Tracy led Denmyer, Wagaman, Euculano and Jeff Halligan on the restart. Tracy kept the lead with Wagaman all over Denmyer for second right behind him.

Halligan got up to fourth on lap 9 from his eighth starting spot. The leaders in front of him were running the bottom groove around the track, except for Wagaman who was riding the cushion.

The caution flag made another appearance on lap 12 when Dylan Orwig got spun around in turns 3 and 4. Unable to avoid the stopped car, Wagaman and Halligan made contact with Orwig ending their night. Wagaman had been running third and Halligan was fourth.

Tracy went low on the restart to block Denmyer’s line. It worked as Tracy kept the lead.

Doug Hammaker was up to fourth on lap 13 and went to work on Euculano for third. Hammaker took the spot from Euculano in turn 1 on lap 15.

Tracy lead wire to wire and took the checkered flag over two seconds before Denmyer crossed the line for second. Hammaker held onto third. Euculano finished fourth and Matt Findley rounds out the top five.