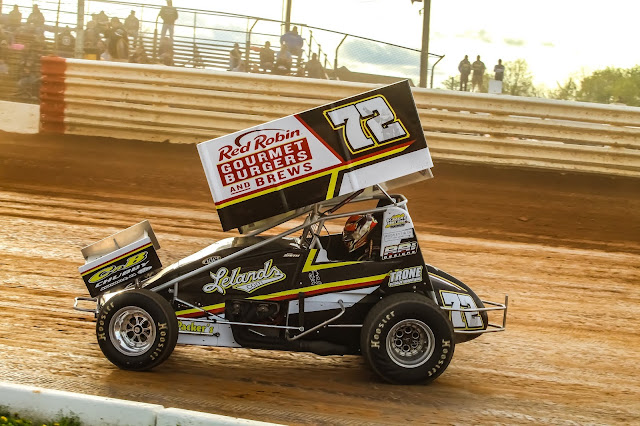 SELINSGROVE, Pa. – Ryan Smith of Kunkletown showed up at Selinsgrove Speedway Saturday with his eye on the coveted Kramer Cup trophy and took it home with him after a wire-to-wire victory in the 30-lap tribute race honoring the memory of the late Hall of Fame sprint car driver Kramer Williamson.

Smith, at the wheel of the Heffner Racing/Red Robin No. 72, also ended up with $3,937 in prize money including contingencies.

Shaun Lawton of Bloomsburg pulled off the hat trick with his third consecutive win in the 15-lap pro stock feature, while Brad Kling of Mount Union won the 20-lap Mid-Atlantic modified feature in the division’s only appearance of the season at the track.

Selinsgrove Speedway will be back in action with a two-race weekend on Saturday, June 29, and Sunday, June 30.

Saturday night’s race will feature the 360 sprint cars, super late models, pro stocks, and roadrunners on the track’s annual Kids Night sponsored by the Sunbury Eagles Club. The super late models will race for an increased purse with $2,500 going to the winner. Track gates will open at 5 p.m. with racing slated to begin at 7:30 p.m.

Ryan Smith blasted into the sprint car lead from the pole and was followed by Troy Betts, Michael Water, Curt Michael and Chad Layton.  The caution flew on lap two for Kyle Reinhardt.

Walter got a jump on Betts on the restart and moved to second leaving Betts and Michael to battle for third.
Smith, a veteran who spent several years with the ARDC Midgets and All Star Sprint Cars, sliced his way through the traffic opening a straightaway lead but in the waning laps started to slow.  This allowed Mark Smith, who had come from the back of the pack, to draw close but Ryan Smith held on by just .416 of a second over Mark Smith, Walter, Michael and Layton.

“With about five to go we got into some mud in the second turn and the wheel packed up.” Smith said.  “It was really shaking plus I was having trouble getting by the lapped cars. I saw Mark (Smith) was in second for the last two laps but I didn’t know how close he was.”

Dave Zona nosed past Nathan Long at the start/finish line to lead the late model feature.  They were followed by Jerry Bard, Jim Yoder and Ken Trevitz.  Dick Houtz slammed the third turn wall to bring out the yellow on lap three.

When racing resumed, Bard drove into second and Coleby Frye was in third.  Frye moved to second on lap 10 with an outside move on Bard and took off after Zona.

By the halfway point. Frye was beside Zona and took the lead in the second turn. With four laps to go the caution came out for Kevin Palmer wiping out a four second lead. Yoder used the restart to take second and Hayes Mattern third.

Frye became the first repeat winner in the late models with a second victory over Yoder, Mattern, Brett Schadel and Bryan Bernheisel.

“We really like running up here but it’s hard to come from the back.” Frye said.  “Well I guess it wasn’t that bad, we won.  The crew worked on the track and it was really racey.”

Jerry Foster shot into the lead from the outside pole position to start the Mid-Atlantic modified feature and was followed by Cody Williams, Brad Kling, Cody Oliver and Ray Kable.   A lap two caution regrouped the field into a side by side restart.

Jimmy Jesmer Jr restarting outside Foster made a charge for the lead but fell back into second when the caution flag flew again.  Jester pulled to the infield under caution.

Kling got by Foster to lead lap five and started to open a lead.  By the halfway mark, Justin Cullum had passed for second and started to close the distance on the leader but could not catch Kling who won by 1.734 seconds over Cullum, Rick Hulson, Jerry Foster and Oliver

Mid-Atlantic modified heats were won by Kling, Jesmar and Oliver.

A lap seven caution slowed the field and put Lawton on his tail.  Lawton and Moser battled down the back straight with Lawton taking the lead.

Lawton drove to his third consecutive win by 2.94 seconds over Moser, Stroup, Hoffman and Bachman.