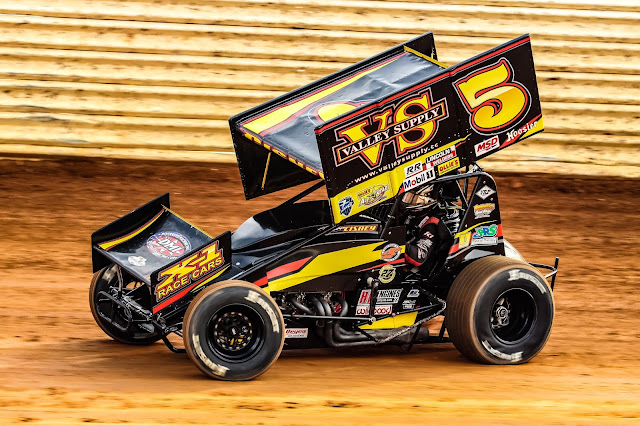 PORT ROYAL, Pa- Cisney has a flare for the dramatic. For the second time this season, Cisney used a last ditch effort to best Anthony Macri coming to the checkered flag for his second win of the season at the Port Royal Speedway.

The win didn’t come without drama though as Cisney was leading on the white flag lap and proceeded to get into the wall in turn 2 and ride the guard rail half way down the backstretch, at one point getting on 2-wheels. He was able to regroup, but made contact with Macri exiting turn four, sending Macri spinning wildly into the front stretch inside guardrail.

"It's not really something to celebrate," said Cisney in victory lane. "It was just tight racing and it was completely my fault. All I can say is sorry and move on."

Rick Lafferty and Trenton Sheaffer led the field to the green flag, with Sheaffer getting the early jump from the outside front row to lead lap one. However, there was plenty of action happening mid-pack on the start.

Third place starter Steve Buckwalter got bottled up on the inside, allowing Cisney to advance from 8th to 4th at the exit of turn 2. Fourth place starter Jared Esh also capitalized to take the third place spot on the opening turn and he slid past Lafferty for 2nd heading into turn 3.

Sheaffer's reign at the top wouldn’t last long, as Esh slid under him in turn 1 and 2 the following lap to take the lead. Cisney would pull under Sheaffer in turn's 3 and 4 and hold the second position by a nose at the line as well.

Meanwhile 7th place starter Macri and ninth place starter Logan Wagner were dicing their way to through the field as well. Macri slid into 3rd exiting turn 2 on lap 3 and Wagner would follow suit two-laps later to take the fourth position.

Esh held a comfortable 2.4 second lead on the field before he attempted to pass the lap car of Ryan Linder on the bottom of the speedway on lap 9, allowing Cisney to cut the lead in half. Three laps later the caution flag would fly as Sheaffer would get turned around in turn 4 while running in the 8th position.

Esh would once again get the jump on the field when racing returned to green-flag action as he held off Cisney's attempt in turn 1 and 2. Macri would pull even with Cisney in turn's 3 and 4 as both drivers looked to pounce on the leader.

Coming into turn 1 Cisney dove to the bottom of the speedway and executed a perfect slide job to take the lead. Macri used his momentum exiting the backstretch of the speedway to slide under Esh as well to move into the second position.

"Jared (Esh) was pretty good there and I got around him." said Cisney. "We were really good in clean air. The car was good enough that I knew if we got there we'd have a shot to win."

Wagner would pass Esh for the 3rd position on lap 17 as Esh slowed entering turn 1 and pulled off the speedway with a mechanical issue.

As Cisney entered turn 1 following receiving the white flag, he went to the high side of the speedway to pass the lap car of Nicole Bower. With a .743 second lead, he got into the wall and his momentum kept him slapping the outside guard rail. He continued to ride the guardrail down the backstretch, barely keeping the car from wrecking.

This allowed Macri to pass him entering turn 3. However with Cisney regaining speed and the lap car of Bower on the bottom, Macri took entry through the turn in the middle, forcing him to slide up the track exiting turn 4. This allowed Cisney to get a run back under him heading to the checkered flag and the two cars made contact, breaking something in the front of Macri's car and sending him spinning wildly.

Cisney would take the checkered flag by .653seconds as Wagner and Mike Wagner drove by Macri's smoking car resting on the inside guardrail. TJ Stutts and last week's winner Lucas Wolfe completed the top 5.

"It's hard to run the fence here and I jumped It there on the last lap behind lapped cars, " said Cisney to  a crowd of boos and cheers. "You have to be real careful or it'll suck you into it. I came up on that lap car and I cracked the throttle at the wrong time and it pulled me into it. It was a bad last lap but I have to thank my guys for a good car."

Wagner, the series points leader was disappointed with the finish and thought the race should have remained with one lap left following the wreck. Speedway officials deemed the race over though.Macri walked away under his own power to the pits.

"It was one of those race tracks where you had to get up on it," said Wagner. "I thought I had another chance at them. It's a shame when Macri wrecks on the frontstretch and Cisney crosses the checkered and the race is over. If anything, we should have another lap."

"We've had a lot of close ones here. It’s been a long time coming but we finally ended up here on the stage," said Lee.

Tim Wilson and Scott Flickinger led the field to the green flag with Wilson jumping out to the early lead. Colton Flinner was the early mover as he slid from his fourth starting position into second on the opening lap.

Three laps later the caution came out as two cars got turned around in turn's 3 and 4.

When green flag action returned, it was Wilson again getting the jump on the field. However the race was heating up behind him as Stuhler and Lee were in a testy battle for the fourth position. Both drivers held the position multiple times over the next 4 laps before Lee passed both Stuhler and Rance Garlock to move into the 3rd position on lap 9. Stuhler was follow into fourth using the outside of the speedway.

Two laps later both Lee and Stuhler passed Flinner for 2nd and 3rd.

One lap later Lee reeled in Wilson and he pulled even with him exiting turn 2. With a head of steam heading into turn 3, Lee slid in front of Wilson to ultimately take the lead for good. Stuhler would move into 2nd with 10 laps to go, but would never mount a serious threat to Lee as he took the checkered flag by 1.240 seconds.

"You can race top or bottom or just about everywhere on this track," said Lee. "I was kind of running the middle there at the end and earlier I was on the bottom. The car was great all around and I'm happy to get the win."

Andrew Yoder came from the 8th starting position to dominate the Selinsgrove Ford Limited Late Model feature event as he bested Tim Krape by 4.449 seconds for the $800 win.

Krape and Donnie Farling led the field to the green flag with Krape taking the early lead. The caution would come out on lap 3 as two cars got turned around on the backstretch.

On the restart, Krape got crooked in turn's 1 and 2, allowing Farling to move into the lead by a nose at the line. Meanwhile Yoder was lurking in third. As the top two battled, Yoder made his move, taking 2nd on lap five and the lead on lap 8.

Krape would settle in in 2nd, but would have nothing for Yoder.

"I have been on the podium a lot this year, but I'm tired of not winning. That's what we are here for," said Yoder. "I ran the bottom on that restart and the car just didn’t pick up. SO I moved up and the csr  really took off. I'm happy to be sitting here."

Dustin Hoffman held off Brad Mitch and Pete Leister after a lap 9 restart to lead all 15 laps and claim the Juniata Junction Restaurant Xtreme Stocks feature event. Curtis Lawton and Corey Kepner rounded out the top 5.