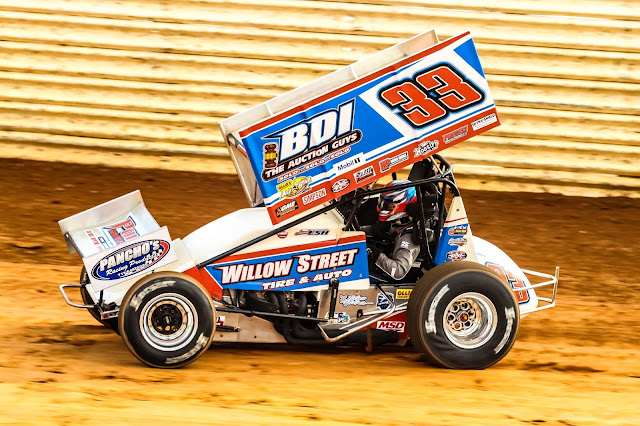 PORT ROYAL, Pa- Jared Esh has been so close to tasting victory at the Port Royal Speedway in Weikert's Livestock 410 Sprint Car action. Just last week, Esh was leading the feature by a large amount when he nearly made contact with a lap car and allowed Dylan Cisney to close the gap. Motor issues brought an end to the fairy tale a few laps later.

He's blown tires, got into accidents and at times struggled with track conditions. As a young driver driving in the shadow of his retired father, Doug Esh, it would've been easy to second guess himself and wonder if he'd ever find victory lane. But the Lancaster, Pa. native kept coming back and kept grinding.

The hard work and effort finally paid off as Esh came from the 9th starting position on a hot night to hold off a hard charging Blane Haimbach and a broken shock to pick up his first career 410 Sprint Car victory.

"I don’t even remember half the race honestly," said Esh, surrounded by a mob of friends, family and fans before receiving a congratulatory phone call from his father in victory lane. "This is just so cool and I'm just  really blessed and happy to be sitting here. I knew I could do it."

Tyler Bear and Tyler Reeser made up the front row, with Bear jumping out to the early lead after taking the green flag. However, A.J Flick, who started third, quickly showed he would be a factor as he pulled behind Bear exiting turn 2 and used his momentum to slide under him entering turn 3 to take the lead and lead lap 1.

The red flag would come out one lap later as Anthony Macri continued a string of bad luck when he made contact in turn 3 with Kyle Reinhardt on the bottom of the speedway. Macri would spin up the track and get on his side and would briefly get upside down after Jeff Miller had nowhere to go and hit his car.

All drivers walked away unharmed.

With extremely hot temperature's hitting the area drivers were allowed to exit their cars during the red-flag during clean-up.

When green flag action returned to the speedway, it was Flick once again sprinting out to the lead. However, things were heating up behind him. Kyle Reinhardt moved into the second position with a slide job on Bear in turn's 1 and 2 and Dylan Cisney and Esh entered the top five as well.

One lap later, it looked like Cisney was coming to make it back-to-back victories as he passed under Bear for the third position at the line. Esh would slide under Bear for the fourth position in turn's 1 and 2 on lap four and track point leader Logan Wagner would crack the top 5 exiting turn 4 as well.

Esh pulled up to the tail tank of Reinhardt and the two briefly jockeyed for position on lap 9, however the caution would fly for a slowing Reeser on the front stretch, wiping out a large lead for Flick and negating Esh's pass for second.

On the restart, Reinhardt showed his muscle as he tried a slide job on Flick entering turn 1. He would pull even with him as the two cars  exited turn 2 and they would drag race into turn 3, with Flick using the high side to pull ahead once again. However Esh used a head of steam exiting turn four and passed Reinhardt for second before ducking under Flick at the line.

Esh tried a slide job of his own entering turn 1 and he took the lead from Flick, only for Reinhardt to overtake Flick as well and pull even with Esh exiting turn 2. Reinhardt would try a slide job in turn's 3 and 4, however Esh had enough momentum on the top of the speedway to lead for the first time on lap 13.

"We were really fast and anytime you start as far back as we did, you have to be on the wheel and making moves when you can," said Esh of his move for the lead. "These guys are all so good here and I just knew it was time to go if I wanted to win."

It looked like Esh's string of bad luck might continue as he slammed against the outside guardrail exiting turn 2 the following lap. He was able to continue, but there appeared to be something broken on the car as Esh nearly spun on by himself on the top of the speedway 3 laps later in turn 3 with a 2.985 second lead at his expense.

Realizing something was broken, Esh moved to the bottom of the speedway to try and hold on to the car and be able to control it. With five laps remaining, Reinhardt, who was using the high-side still, had closed the gap significantly and was on the tail-tank of the leader. Knowing he wouldn’t be able to hold off the pack where he was running, Esh made the decision to go all-in and move back up the speedway.

"I almost spun out back there and I really knew something was broken and that it was going to be really hard to hang onto the car up top," said Esh. "But I kept seeing Kyle get closer and closer and I knew at that point I was going to have to just go for it up top if I wanted the chance to win."

Esh continued to fend off Reinhardt and opened up a 1.145 second lead with 2-laps to go, when Kyle Smith brought out the caution as he came to a stop in turn 1, setting up one final restart.

Nursing the car coming to the green flag, Esh waited until the last minute to get in the gas and bring the field back to racing action. Reinhardt tried to execute a slide job in turn 1, only for Esh to ride the middle of the track and break up his momentum. Reinhardt would re-group down the backstretch and try another slide job attempt in turn's 3 and 4, but Esh was able to once again lead to come to the white flag.

With the pack all jockeying for position in hopes Esh's car might finally give in, Blane Heimbach, who started 10th, pulled a  slide job to go from fourth to second exiting turn 2 on the last lap. However, he would have nothing for the leader and Esh would win by .992 seconds for his first- ever victory worth $3600. He also received a $300 bonus for winning from the 9th starting position.

"After Speedweek I think we were all ready to kill each other after 9 straight days of racing," said Esh."We've been fast, but we just hadn’t been able to get that break."

"My guys kept working and we kept gaining and I'm just happy to finally be able to give them some recognition that all our hard work is paying off and this is a night I won’t soon forget."

For Heimbach, he was just happy to be able to be in contention after starting from the 10th starting spot.

"We were fortunate to be in a position there on that final restart to even have a shot at winning," said Heimbach. "We kept at it and the car was really good, but ultimately we just started too far back and I'm happy with a second. Congratulations to Jared and his team, they deserved it tonight."

Flick also received a $150 bonus form the 4-H Club for finishing in the fourth position.

"Usually we are coming from mid-pack and when we have to do that it seems we are always really good," said Yoder. "I usually seem to have bad luck or something happens when we start up front. It’s nice to finally take advantage of the starting spot and come home a winner."

Yoder and Alex Ferree led the field to the green flag with Yoder jumping out to the early lead.

Ferree and Jeff Rine were putting on the early show as the two cars raced side by side behind Yoder for second over the next 3 laps. However a car would spin in turn 3 and bring out the caution with 4 laps down.

With the field utilizing Delaware restarts, Yoder was easily able to pull away on the restart. However, the side by side action behind him was a blessing to 9th place starter Andy Haus as he moved into the fourth position on the top of the speedway in turn's 1 and 2 before sliding into third exiting turn 4 to complete lap 5.

Two laps later he would use the outside of the speedway to move into the second position and he began to set his sights on Yoder. Just after the completion of lap 7, the caution would fly again for a car spinning in turn 3 again.

Haus would choose the outside line to line up on the restart and he would attempt a slide-job on Yoder entering turn 1 and 2. However, Yoder would pull away down the backstretch and begin to once again check out on the field. Things would go relatively calm over the next 10 laps before a car would once again spin in turn 4 to bring out the final caution.

Haus would once again take the high line behind Yoder, but a bad restart allowed Yoder to enter turn 1 unchallenged. Haus would actually lose a few positions and he would battle with Ferree and Rine over the final laps for the second position while Yoder checked out over the final 8 laps to take the checkered flag by a commanding 2.817 advantage.

"We had been struggling earlier in the year and we made a few changes last week that really seem t be paying off," said Haus. "I thought we mightlve had something for Dylan there early in the race, but once I made my move and he pulled away, ultimately I knew he had the best car and it was going to just be about luck if we were to get him."

Adams and Bard led the field to the green flag with Adams getting the early jump on the field. A lap 3 caution brought the field back together before much action could occur.

On the restart it was Drew Ritchey making his move as he tried to pull under Adams in turn 12 and 2, however he couldn't complete the pass and Adams would pull away.

Bard would get by Ritchey to move back into the second position on lap 14 and he would attempt to track down Adams, who was battling with lap traffic ahead. On lap 18 on the backstretch, Bard would taker advantage of the lap cars to pull by Adams and lead lap 18. Nobody would have anything for the young rookie and Bard would claim the checkered flag over Adamas by a .865 second advantage.

Ritchey would receive a $150 bonus form the 4-H Club for finishing fourth.