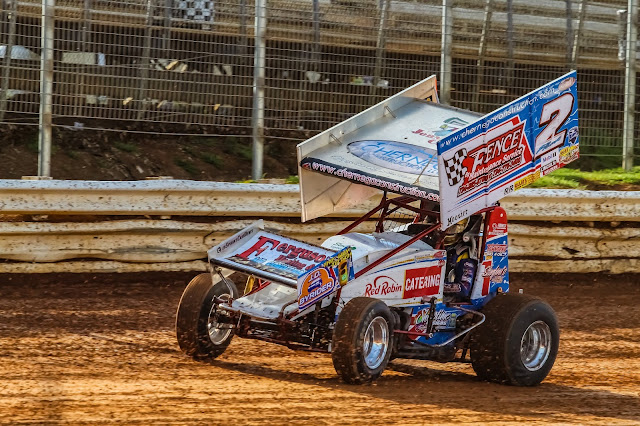 Sarver PA (July 19, 2019) On a hot day at the Action Track, the Fab4 Revved up with Marburger Farm Dairy gave us another spectacular showing on a day that showed 90 degree weather. The racing was just as heated as the weather as it saw Colton Flinner win his first race of the season, Jeremiah Shingledecker wins his second in a row, Points leader A.J. Flick win again, and Tyler Dietz win the Pro Stock feature.

In the Precise Racing Late Model Feature, Colton Flinner comes home with his first victory of the season. Kelvin Kohan lead them to the green, but Tommy Beck grabbed the early lead. Jared Miley took the lead on lap 6, but spun out on lap 7 with the lead which brought out of the caution. Colton Flinner took the lead after Miley’s spin and never looked back leading all the other laps. Jared Miley rallied back from that spin out and was able to come back and finish second.

The Diehl Toyota Big Block Modified feature showed Jeremiah Shingledecker win his second straight race at the Action Track. Dave Murdick started on the pole and lead most of the 25 lap feature. The race saw two red flags which had Rex King Sr and Rex King Jr involved in the first one with both drivers okay and Randy Chronister, who had a fire under his car on lap 20 which also saw him get out okay. Jeremiah Shingledecker took the lead over Dave Murdick on lap 22 and saw him cruise to victory lane for the 3rd time this season and 2nd in a row. Dave Murdick went on to finish 2nd.

The People’s Natural Gas Sprint Car feature was the A.J. Flick show as he went on to win as the points leader gets another win on the season. Zach Morrow lead them to the green but Russ Sansosti took the lead right off the start. He lead the first 7 laps before Flick chased him down and passed him. After that it was all Flick who lead all the others laps and ran away with it. Sansosti went on to get second followed by Carl Bowser, Jack Sodeman Jr, and Jimmy Morris rounding out the top 5.

The Pic-A-Part Sportsman Pro Stocks had Tyler Dietz get another win on the season. Mike Bordt led the race early but after a caution on lap 8 which saw Joey Zambotti go off and involved Ryan Moyer, Tyler Dietz took the lead. It was the Tyler Dietz show after that in which he lead the rest of the 20 lap feature while holding off Corey McPherson to win. Mike Bordt got 3rd while Butch Lambert and Ryan Moyer rounded out the top 5.