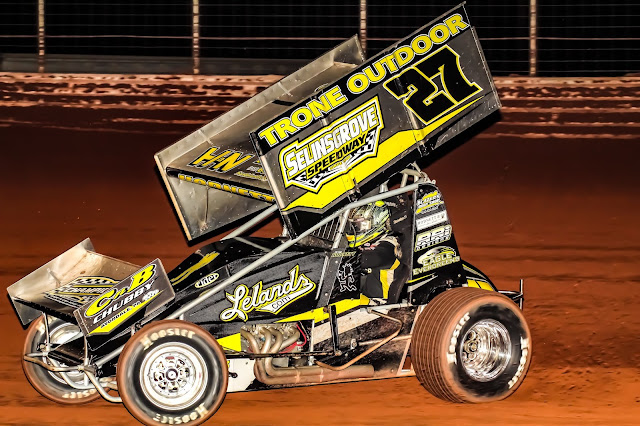 PORT ROYAL, Pa- Fighting off thunderstorms that hit the track all evening, Port Royal Speedway worked vigorously to make sure that the 1st Annual Greg Hodnett Classic was a success and that racing activities occurred for the many fans and supporters in attendance.

The 1st Annual Greg Hodnett Foundation 5k race kicked off the days activities where nearly 150 participants ran in memory of the late-great racer. 16-year old Brayden Harris completed the course with a time of 17:27 to take first place with the next finisher more than a minute behind. The highest finishing female was Janelle Werner of Beavertown, Pa. with a finishing time of 20:17.8, which was good enough for 5th overall.

The Greg Hodnett Foundation Memorial Cornhole Tournament organized by Tom Stimely Jr and Mid Penn Cornhole followed the race with 33 teams taking part in the event. The blind draw tournament was won by the team of Dane Delancey and Steve Roush, who both won $150 for their efforts. Second Place was Tom Stimely and Jared Shirk. The tournament raised almost $700 for the foundation.

Finally, the benefit auction occurred at 5:30, where fans were able to bid on one-of-a-kind items to include wing panels, photos, mementos and more. A large crowd took to the pavilion in support of the Mike Heffner led auction and everything went smoothly. Brian Imes was the auctioneer for the event.

As a whole, after all 3 events, merchandise sales, bake sale and raffle ticket sales, the foundation was able to raise nearly $27,000 in honor of Greg. The money will go towards a Survivor’s Benefit that will help ease the burden of the family members of a driver were they to pass away during competition at a Central Pennsylvania racetrack.

“It was such a pleasure to be able to work with Sherry and her team to honor such a great man,” said Steve O’Neal, Port Royal Speedway Head Promoter. “I was overwhelmed by the support we got for all of the events and I can’t thank all of the great fans and racers that helped achieve a very successful day and I’m looking forward to next year’s event.”

Racing activities ran deep into the night, with Lucas Wolfe ultimately picking up the $7027 win and the custom made Greg Hodnett Classic trophy created by Cold Hard Art of Brownsburg, Indiana. Wolfe used the win to also propel his Barshinger Racing team to victory as the 2019 PA Speedweek champions.

The highlight of the night for many was the 5-wide salute where all five of Hodnett’s PA Posse race cars were represented out front of the starting lineup while participating drivers performed a Missing-Man formation” honoring the driver before the green flag dropped.

While an official date has not been scheduled, the event and race will return next year to the Juniata County facility with a potential date being July 4, 2020. Be on the lookout for more information on next year’s event.

“Everybody at Port Royal Speedway and the entire Fair Board did a great job in making sure this event ran smoothly from start to finish and I can’t thank them enough for all of their support,” said Sherry Hodnett, Greg’s wife. “It was a great day and I really appreciate everybody coming out to support the event and all of my volunteers, team members and sponsors were invaluable to making this event successful.”

“The fans were amazing, and the support was above and beyond. Thank you for sticking out the weather and being part of a truly memorable event for a cause dear to our hearts. I’m looking forward to next year and hopefully we can continue to make this a special event for years to come. I think Greg would be proud and honored,” she added.

Event shirts sold out early in the night. There will be a reorder and plans are to have them back in stock and available by the August 3rd Living Legends Dream Race at the Speedway. Information on future events and more can be found at www.greghodnettfoundation.com and also on their Facebook page.

Other shirts and foundation apparel will be available at speedways throughout the region and eventually there will be an online store for purchasers wanting to buy online.
Posted by Bill McIntyre at Monday, July 08, 2019