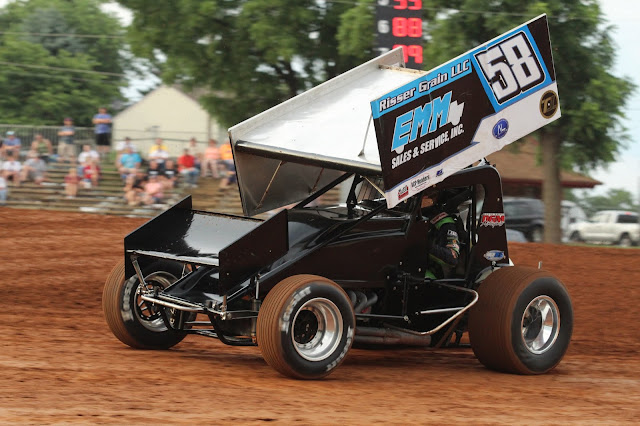 Abbottstown, PA (July 20, 2019) – After leading the first two laps of the feature last week in his first night out in Aaron Long’s No. 58 410 Sprint Car, Jeff Halligan took the lead on this Saturday night and never looked back.

For the second week in a row Halligan and Jessie Attard shared the front row of the 25-lap feature.

Halligan took the lead when the green flag dropped with Attard running second and Cole Young in third.

Tim Wagaman got by Young for third out of turn 2 on lap 1. The yellow flag came out on lap 2 for Scott Fisher who got into the inside guardrail in turns 3 and 4.

Chase Dietz challenged Young for fourth on the restart with Cory Haas joining the battle just as they caution came out again on lap 3 for Fisher who was off the pace in turn 3.

Halligan led Attard, Wagaman, Young and Dietz to the cone on the front stretch for the single file restart.

Alan Krimes was on the move running eighth on lap 4 from his thirteenth starting spot.

The red flag flew on lap 4 for Brian Montieth who got upside down in turn 2.

Wagaman went to the top on the restart to try for second with Young following. The top did not work for Young as Dietz and Haas got under him, sending Young back sixth.

With quite a bit of clean up on the front stretch the cars were pushed to turn 2 for an open red.

Chad Trout made it back out to rejoin the field after being involved in the incident.

Halligan led Attard, Wagaman, Dietz and Haas to the green for the restart.

Wagaman went to the top again to try for second with Dietz going to the bottom of turn 3 to drag race Wagaman to the stand for position. Wagaman held onto third.

Krimes was still on the move and was up to sixth.

Halligan started pulling away from the field as Attard, Wagaman and Dietz battled for second.

Attard spun in turn 3 and collected Trout bringing out the yellow on lap 9. Both Trout and Attard rejoined the field.

Halligan showed Wagaman, Dietz, Haas and Krimes to the green for the restart.

Dietz went to the outside in turn 1 to take second from Wagaman with Haas following on the next lap to take third.

Dietz got out of sorts on lap 10 gets in turn 4 fand fell back to fourth.

Haas moved into second on lap 11.

After his bobble earlier in the race Dietz was working on Wagaman to get back up to third. The two swapped spots on lap 16 with Dietz taking the spot on the next lap.

After getting caught up in wrecks twice earlier in the race, Trout found himself running fifth with five laps to go.

After crossing the line first three times earlier this season in 358 sprint competition, Halligan beat the field to the checkered flag to win his first 410 sprint feature. Haas held onto second. Dietz crossed the line third and Krimes finished fourth. Trout pieced together an impressive run for the second week in a row to finish fifth.

Steve Owings found victory lane at Lincoln for the first time earlier this season on June 15. Owings lined up on the pole of the 20-lap feature Saturday night with Zachary Cool to his outside.

Owings got out to the lead on the start with Dylan Norris getting under Ashley Cappetta out of turn 2 for third.

Norris got by Cool going into turn 3 for second on lap 1.

The yellow flag came out on lap 3 for Alyson Dietz who stopped on the cushion in turn 2.

Owings led Norris, Cool, Cappetta and Wagaman back around to the green for the restart.

Wagaman got up to 4th using the high side around Cappetta.

Owings was pulling away in clean air while Doug Hammaker was making his way through the field from his eighth starting spot to fourth.

Wagaman, running third, started to close in on Norris for second. Wagaman got around Norris in turn 2 on lap 7 to take the spot.

Once by Norris, Wagaman started reeling in Owings to battle for the lead.

Hammaker under Norris going into turn 1 on lap 9 for third.

Owings caught the tail end of the field lap 12 and started to work through lapped traffic.

Hammaker got under Wagaman going into turn 3 on last lap but Wagaman held on and crossed the line second behind Owings. Hammaker finished third and Norris was fourth. Brett Strickler completed the top five.

Steve Owings and Brett Strickler were the heat race winners.

With the heat in the air on a July Saturday night, Mason Chaney’s win in April was a distant memory. Chaney shared the front row of the 20-lap feature with pole-sitter Scott Lee.

Chaney took the lead when the green flag dropped with Bill Diehl all over Lee for second. Diehl got under Lee coming out of turn 2 for the position.

Lee got high allowing Alex Schmeidel to get by for third.

The yellow came out on lap 3 for Mike Rebold in turn 3. Josh Schrum who started fourth headed into the pits. Tim O’Sheehan came to a stop in turn 1 as the field was lined up for the restart. O’Sheehan went to the pits ending his night.

Chaney raced to the cone with Diehl, Schmeidel, Austin Bellemare and Aaron Updegraff lined up behind him.

Jeremy Ott, the winner of the last two Legend races at the track was up to sixth from his tenth starting spot for the restart.

Chaney had solid restart with a three-way battle for third behind him between Bellemare, Updegraff and Ott.

Lap 4 saw the caution come out for Bellemare in turn 3.  Ott headed to the pits under caution, ending his night and a chance for a three-peat.

Chaney drove through the middle of the track with Diehl trying to work the bottom to take the lead.

Diehl stuck his nose under Chaney in turns 1 and 2 with Chaney holding onto the top spot.

Another three-car battle for third was in progress behind the leaders. This time it was Updegraff, Schmeidel and Travis McClelland with Updegraff keeping the spot.

Diehl was keeping Chaney within striking distance for the lead when the caution came out on lap 8 for Schmeidel who got spun around in turn 4 while running fourth.

Chaney had the field lined up and ready for green, but Bellemare came to a stop in turn 2 before the restart.

Diehl got his nose under Chaney again in turns 1 and 2 but Chaney held onto the lead.

The yellow came out again on lap 9. This time for pole-sitter Scott Lee in turn 2.

Chaney and Diehl continued to battle for first with Diehl running a slightly lower line around the track.

Chaney held off Diehl to win his second feature of the year at Lincoln. Updegraff finished third. McClelland crossed the line fourth and Jeremy Hahn completed the top five.