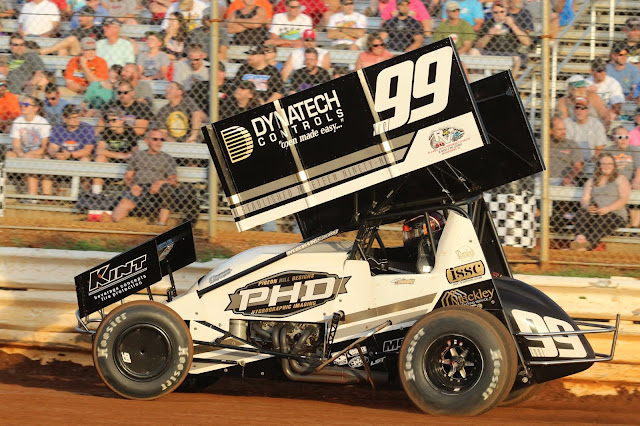 Abbottstown, PA (July 13, 2019) – Jeff Halligan, a regular in the 358 division at Lincoln, got behind the wheel of Aaron Long’s 410 machine on Saturday night. Halligan won his heat and stared on the pole of the 25-lap feature. Australian, Jessie Attard, lined up second.

Halligan took the lead with Cole Young moving up to second and Attard falling into third. The caution came out before one lap was completed when Jay Galloway spun out in turn 1. The field lined up for a complete restart.

Halligan took the lead again and this time Attard held onto second. Another caution came before a lap was completed as Jim Siegel came to a stop on the back stretch. Siegel was able to rejoin the field.

The third time is the charm. The field lined up for their third try at starting the 25-lap feature and this time it worked.

Halligan out to the lead, Attard in second and this time Kyle Moody was on the move. Moody was up to second after passing Young and Attard on the first lap. Young got second from Attard on lap 2 but the caution came out for Jay Galloway who spun out in turns 1 and 2.

Halligan led Moody, Young, Attard and Brett Michalski to the cone on the front stretch for the single file restart.

Halligan went to the top and Moody chose the bottom going into turn 1. Moody had the lead coming out of turn 2 and kept it to lead lap 2.

Halligan tried to take the spot back and slid up the track in turns 1 and 2 but Moody held the position.

The caution came out again on lap 2 for a five-car pile-up that in turns 1 and 2 that included Brian Montieth, Brett Michalski, Freddie Rahmer, Tim Wagaman and Chad Trout.

Young and Halligan raced down the backstretch for second with Young taking the spot.

Glenndon Forsythe challenged Glatfelter for fifth with Glatfelter holding him off.

The caution came out on lap 7 for Brian Montieth who got turned around in turn 2 while charging through the field after getting caught up in the earlier wreck.

Moody held onto the lead on the restart as Halligan and Young battled for second and Alan Krimes moved into third.

As Halligan and Young battled for second, Halligan slid up into Young in turn 2 with Young ending up on his side bringing out the red flag.

Track officials opened the red up for teams to refuel after the number of laps run under caution.

Moody led the field to the cone for the restart with Krimes, Attard, Glatfelter and Brandon Rahmer lined up behind him.

Moody went to the bottom with Krimes driving around the top with Moody holding onto the lead. Rahmer got around Attard and Glatfelter and was running third.

After getting caught up in the first wreck of the night, Trout was making his way through the field and was up to sixth when the caution came out again on lap 12. Chase Dietz stopped against the outside wall in turn 1 and Montieth came to a stop in the bottom of turn 2. Both Dietz and Montieth rejoined the field.

Moody led Krimes, Rahmer, Glatfelter and Attard to the line.

Krimes dove low into turn 3 on lap 12 to challenge for the lead but Moody held him off.

Trout and Attard battled for fifth with Trout making the pass out of turn 2 on lap 14.

Moody entered lapped traffic on lap 21. Rahmer moved into second on lap 22 and started to track Moody down. Three laps proved to not be enough time for Rahmer to catch Moody. Moody got to the checkered flag 1.629 seconds ahead of Rahmer. Krimes crossed the line third. Trout, with an impressive run through the field, finished fourth and Glatfelter was fifth.

After winning the make-up feature from June 1 earlier in the night, Troy Wagaman Jr. started on the pole of the 25-lap Summer Series event. Jeff Rohrbaugh the winningest 358 driver in Lincoln history started on the outside of the front row.

Rohrbaugh had a solid lead coming out of turn 1 and led lap 1 over Wagaman, Scott Fisher and Doug Hammaker.

Hammaker took third from Fisher on lap 2. Tyler Ross was on the move running fourth and challenging Hammaker for third. Kevin Nouse made it a three-way battle for third and took fourth from Ross.

Rohrbaugh caught the tail end of the field on lap 9 just as the caution came out for Mike Bittinger who came to a stop on the back stretch.

Rohrbaugh held onto the lead with Nouse all over Hammaker for third.

Rohrbaugh entered lapped traffic on lap 17 with Wagaman closing in as they worked through the lapped cars.

The caution came out on lap 20 for Brett Strickler who slowed on the track.

Nouse got by Hammaker on the restart to take third. CJ Tracy followed to move into fourth sending Hammaker back to fifth.

Rohrbaugh crossed the line 2.172 seconds ahead of Wagaman for his record leading 16th 358 win at the track. Nouse finished third and Tracy held onto fourth. Hammaker completed the top five.

The first event on the schedule Saturday night was the 358-make-up feature from June 1. Twenty-one of the 24 cars scheduled to start made the call for the 20-lap make-up feature.

Wyatt Hinkle and Mark Van Vorst made up the front row with Jeff Rohrbaugh and Dylan Norris lined up behind them in row two. Norris got together with Van Vorst coming out of turn 4 before they crossed the line to take the green bringing out the caution. Norris and Van Vorst were both towed off the track with front-end damage.

The new front row for the restart was Wyatt Hinkle and Troy Wagaman.

Hinkle and Wagaman raced wheel to wheel down the front stretch into turn 1 with Wagaman taking the lead out of turn 2.

Wagaman was pulling away from the field with a 3.245 second lead on lap 7 as he approached lapped traffic.

Wagaman maintained a lead over 3 seconds at halfway point as he worked through lapped traffic.

Kyle Denmyer was closing in on Hinkle for second with five laps to go. Hinkle fell off the pace coming out of 4 on lap 13 and was able to pull into the infield.

Mike Walls and Ray Kable shared the front row for the 20-lap feature. Walls and Kable made contact when the green flag dropped with Walls stopping on the front stretch, bringing out the caution.

Current series point-leader, Brad Kling and Kable made up the front row for the complete restart

Kling got out to the lead with Kable in second and Cody Oliver running third.

The yellow came out on lap 3 for debris on the track. The debris was Kable’s drive shaft, ending his second place run.

The field lined up for their double file restart with Kling electing to start on the inside with Oliver to his outside.

Kling held the lead with Cullum moving into second on the restart.

Tim Fedder and Rick Hulson were battling for fourth when the caution came out on lap 10 for Rich Goodman who got turned around in turns 1 and 2.

Kling selected the inside row again for the double file restart.

Kling got out to the lead with Cullum on his bumper. Cullum tried the outside in turns 3 and 4 but Kling held him off.

Cullum tried the outside again on lap 11 in turns 3 and 4 and this time it worked as he took the lead.

The caution came out again for a five-car pile-up in turns 1 and 2.

Cullum elected to start on the inside for the restart with Kling lined up on his outside.

Kling led the field into turns 1 and 2 and started to pull away from the field. Hulson got up to third with Keith Jack Lamphere running fourth and Doug Stine in fifth.

The caution came out again with two laps to go as two cars get turned around in turns 3 and 4. The field lined up for a single file restart with under five laps to go.

Kling took the lead for what would be a two-lap shoot out. The caution came out one last time for another pile up in turn 2 on the restart.

Kling led the field again to the green flag for a two lap shoot out to the checkered flag.

This Saturday, July 20, Lincoln Speedway is back in action with Pepsi Night featuring 410 Sprints, 358 Sprints and Central PA Legends. Racing starts at 7:30PM with pit gates opening at 5:00PM and grandstand gates opening at 5:30PM.