The postponed Feature will start with 28 laps to go, after seven were completed Friday night 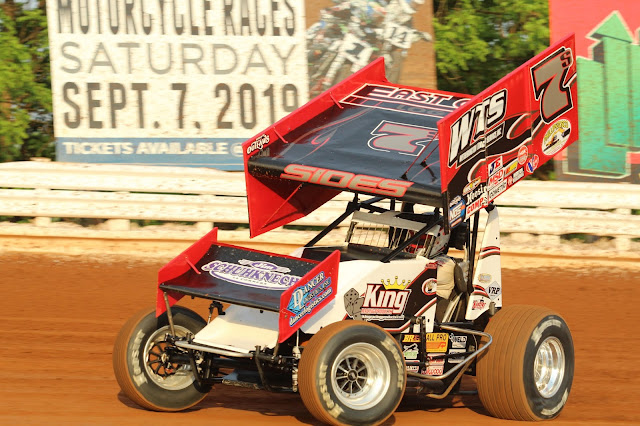 A thrilling duel for the lead brewed between David Gravel and Shane Stewart at the beginning of the World of Outlaws NOS Energy Drink Sprint Car Series Feature Friday night. But then, for the third time in the night, rain fell.

Those who have Saturday tickets will be able to see both Feature races at no additional cost.

Before the rain, Gravel launched by polesitter Donny Schatz for the lead on the start – a reversal of what happened in the DIRTVision Fast Pass Dash when Schatz snuck by Gravel for the lead on the start of the race; Schatz went on to win the Dash. Shane Stewart followed Gravel’s footsteps driving by Schatz, as well. Before they could get much of a run in, the caution came out for Brooke Tatnell, who slowed on the track.

When the racing went back green, Stewart wouldn’t let Gravel get away. Gravel rode around the high side of the track, while Stewart stayed within striking distance around the middle groove.
Behind them, Series points leader Brad Sweet made his way around Jacob Allen for fourth-place and began tracking down Schatz. However, before he could make a charge, the red flag came out for Jac Haudenschild flipping on the front stretch.

During that delay in action, the rain fell. The night was over. Teams will be faced with a doubleheader on Saturday at the New Richmond, Wis. track. The duel between Gravel and Stewart will rage on. But behind them will be Schatz, who is looking for his first win in 11 race, Sweet, who has won six of his last eight races and Allen, who is still seeking his first ever World of Outlaws win.

Tickets for Saturday’s race are still available. You can purchase them at the track or at WorldofOutlaws.com/tix

As always, you can catch all World of Outlaws NOS Energy Drink Sprint Car Series action LIVE on DIRTVision.com.
Posted by Bill McIntyre at Saturday, July 06, 2019