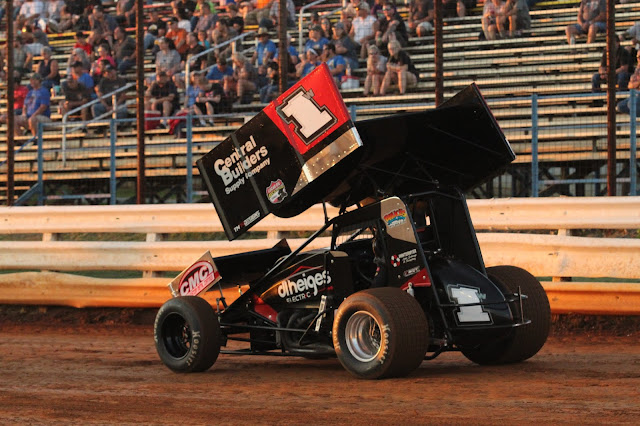 Late in the 25-lap feature race Reinhardt was going to be happy with a second-place finish but things changed in a hurry and instead he picked up his fourth win of the season with a last-lap pass by Colby Womer of Mt. Pleasant Mills at the wheel of the Westbrook Enterprises No. 1W.

Ken Duke of Selinsgrove won his second 305 sprint car feature in a row at the track.

Shaun Miller of Millerstown, who turned many laps in a pro stock at Selinsgrove, returned to win the 20-lap limited late model feature.

Selinsgrove Speedway will be back in action at 7 p.m. Saturday, Aug. 3, with the re-scheduled Kids Night from June. The 360 sprint cars, super late models, pro stocks, and roadrunners will be in action in addition to a classic race car display by the Eastern Museum of Motor Racing on Heller’s Gas Night. Track gates will open at 5 p.m.

Reinhardt, who started eighth, was fast early in the race and was quickly up to third.  Reinhardt caught Carberry for second and started tracking down Womer.

Kissinger dove under Carberry off of turn four for third but the pair tangled in the second turn bringing out the caution.  This moved Chad Layton and Steve Buckwalter into the top five with Jason Shultz stalking the pair.

Womer got a great restart and left the battle for second to Reinhardt and Locke. Running fourth, Layton slowed and stopped in turn four, slowing the field again.

Locke, who has been fast but unlucky lately continued to dog Reinhardt as Shultz raced into fourth.

With two laps to go Reinhardt drew to Womer’s tail tank.  Womer bobbled on the last lap giving Reinhardt the opening he needed to take the lead and win.

Womer, Locke, Shultz and Buckwalter rounded out the top five.

360 sprint car heats were won by Womer and Locke.

The field was slowed on lap eight when Kepner hit the second turn fence.

Duke started to dog the Prutzman car and on lap 10 Duke was in second.  Within three laps Duke caught T. Reinhardt and on lap 14 drove by him off of turn two for the lead. Then Wally Eschenhaur brought out the caution on lap 15.

Duke ran the rest of the distance untested winning by 4.035 seconds over T. Reinhardt, Prutzman, Devin Adams and Doug Dodson.

The heats for the 305 sprint cars went to, Doug Dodson, T. Reinhardt, Prutzman and Adams. The B-Main was won by Dominic Melair.

In the early laps Yoder opened a sizable lead with the father-son combo of Troy and Shaun Miller battling for fourth place.   Shaun broke free and worked his way into second.   The caution flag flew on lap 12 for Troy, who stopped on the track.

Shaun Miller tested Yoder high, passing the veteran down the backstretch.  Almost immediately, the red flag stopped the action as Derrick German slammed the outside wall. He was not injured.

After the restart, Cochran and Yoder started a high speed battle for second exchanging the position over the next couple of laps.  With a clear track in front of him, Shaun Miller raced to the checkered flag over Jim Yoder, Cochran, Andrew Yoder and Snook.

A. Yoder, Snook, and Tim Krape were victorious in the limited late model heats.

Jim Collier slammed the fence bringing out the yellow on the last lap.

Brunson wired the field, his second win of the season followed by Bissinger, Cope, Lawton, and Jones.

Roadrunner heats were won by Bissinger and Brunson.