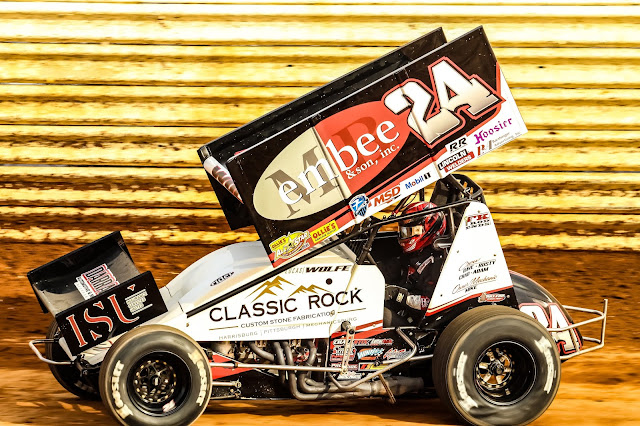 PORT ROYAL, Pa- Lucas Wolfe outlasted the rain and a field of hungry drivers in search of victory on an emotional night that saw the Port Royal Speedway close out a grueling 9 race stretch for PA Speedweek and honor the legacy of Greg Hodnett to pick up the $7,027 Weikert's Livestock 410 Sprint Car win and the Greg Hodnett Classic.

The win was Wolfe's second of the season at 'The Speed Palace' and helped the Mechanicsburg native claim his 4th career PA Speedweek title, which was worth an additional $5000. Wolfe also set fast-time earlier in the night and picked up the Packers Concessions fast time award worth $100.

"I'm extremely thankful and grateful to have a great team behind me that allows me to be competitive every time we hit the track," said Wolfe. "PA Speedweek can be tough on a team and we came to the track each night with a car worthy of sitting in victory lane and I'm extremely happy to finish it off with a victory in front of a big crowd of fans and great drivers."

The feature  event kicked off with a bit of nostalgia, as 5- race cars representing Hodnett's career in Pennsylvania paced the field  while the rest of the field performed a missing man formation in honor of the late-great driver and 2018 PA Speedweek champion. Freddie Rahmer (Al Hamilton #77) and Anthony Macri (Jim and Sandy Kline #22) drove throwback paint scheme's honoring Hodnett along with Cory Haas piloting the Trone Outdoor 39 in normal fashion. Injured driver Ryan Smith piloted a Hodnett #27 for the opening ceremonies while Daryl Stimeling piloted a replica of the Apple #12.

Wolfe, from his fourth starting position, also followed suit and passed Wagner exiting turn 2 to slide into the 3rd position on the opening circuit.

Flick was in cruise control before the red flag was thrown on lap 4 when Mike Wagner took a wild ride on the backstretch and got upside down multiple times. He would walk away from the crash unscathed.

When green green flag action resumed, Flick once again set sail, opening a nearly 1.5 second lead by lap 8. While Flick slid around the high line of the speedway, Kendall was making ground on the bottom of the speedway.

4 laps later, Kendall had cut the lead in half. Meanwhile, Wednesday's winner at the Speedway, Lance Dewease had overtaken Wagner for the fourth position from his fifth starting spot.

On lap 13, Kendall was within striking distance of the leader, showing his nose multiple times on the bottom of the speedway exiting the turns. With Flick hitting lap traffic of lap 14, Kendall made a move. He'd repeat the move in turn's 1 and 2 the next two laps. This allowed Wolfe to pounce, as he capitalized on Kendall's aggressiveness to pass him for 2nd down the backstretch on lap 16.

One lap later, Flick's shot at victory would end as he blew a right rear tire while leading entering turn 1 of the speedway,

With the lead firmly in his grasp, Wolfe was ready for all challenges.

"AJ has had a lot of bad luck this year with right rear tires, so in some ways we were in the right spot at the right time," said Wolfe. "But I knew we had a fast  race car and you like to think you could get by him anyways. As a driver you have got to capitalize on those moments and I knew there were a lot of fast race cars behind us wanting it as well."

Wolfe shot out again on the restart, but Kendall wasn't going away. A one-time winner this season at the Lincoln Speedway, Kendall was hoping to throw a wrench into Wolfe's plans of victory. Over the next two laps, Kendall stayed within striking distance, using the bottom of the speedway to Wolfe's top.

However, Wolfe would soon show that he was not waiting around, opening a nearly 1.3 second lead by lap 20. On lap 21, Wolfe's lead  evaporated as TJ Stutts blew a right rear tire on the backstretch.

On the restart, it was Wolfe once again jumping out to the lead with muscle. Dewease slid Kendall in turn's 1 and 2 and it looked like he might be vying for an encore performance of his late race move Wednesday night. However Kendall proved to be no fluke as he used the bottom of the speedway the following lap to slide back by Dewease for second in turn's 1 and 2.

Kendall would move to the top of the speedway and attempt to track down Wolfe. Over the final 5 laps, Kendall was able to cut Wolfe’s lead nearly in half, but it wasn’t nearly enough as Wolfe cruised to a 1.070 second victory for the victory and the Speedweek title. Dewease, Danny Dietrich and James McFadden rounded out the top 5.

"We were really good out front and it’s a great feeling to be sitting in victory lane," said Wolfe. "The fans stayed all night and the track worked hard to outlast the rain. And to do it on a night where we honored a great driver like Greg, I couldn't be more happy for my guys and this team."

On a night where his dad was announced as an honoree for this season Living Legends Race at Port Royal Speedway, Nick Dickson picked up his first River Valley Builders Super Late Model victory of the season during the Grit House Route 35  Challenge Series Late Models feature.

"Given the weather circumstances, a lot of tracks would've pulled the plug tonight," said Dickson. "We started seventh and passed all those cars to get here, so I’d say it was a good night and good track."

Dylan Yoder and Bryan Bernheisel led the field to the green flag with Yoder jumping out to the early lead. Gene Knaub followed as well and he slid into the second position on lap 1 as well.

The following lap, Dickson started making his move, as he passed Andy Haus for fifth position exiting turn four heading to the line. The caution would come out the dame lap when Chris Casner got turned around in turn 1.

On the restart, Yoder's chances came to an end when he slowed to a stop coming out of turn 4 with a right rear flat tire. This handed the lead to Kyle Hardy, who jumped out to the lead once green flag action returned. One lap later it was Austin Berry slowing with a flat tire as well.

Hardy jumped out again to a hefty lead as green flag action returned. Dickson, who passed Bernheisel just prior to the caution for fourth, inherited the 3rd position thanks to Yoder's issues. Four laps later he moved around Knaub at the flag stand and he set his sights on Hardy.

Hardy caught the tail end of lap traffic on lap 14 and while it appeared Dickson would be able to catch him, he was using the lap cars to  his advantage and began to put distance between himself and the field.

However his night would end on lap 16 when he too blew a right rear tire while leading in turn three. This was all Dickson would need.

Following another caution for Berry getting sideways on lap 17, Dickson would hold off Haus and Knaub to win his first victory of the season at 'The Speed Palace' by 1.674 seconds. He received $2200 for his efforts.

"Kyle would have been tough to beat without his issues," said Dickson. "He was so good on the top and the track was getting harder and harder to pass on the bottom."
"Even in the sprint car feature, tires were an issue. I knew he was running hard up there and I figured If I waited and was patient, I’d have a chance. Tonight just worked out for us and I'm super happy."