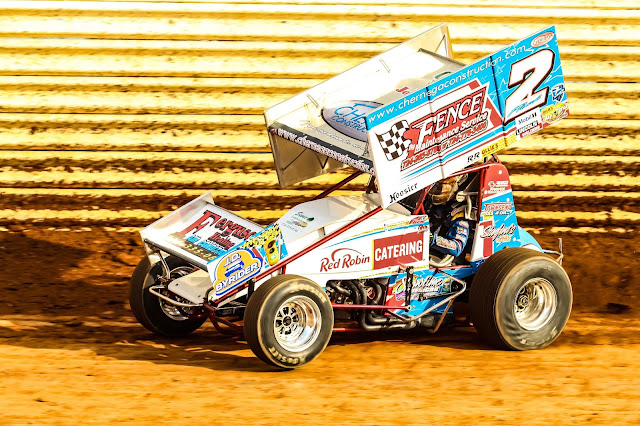 Flick, of Apollo, Pa., earned the $10,000 base pay, plus $2,000 for winning his semi-feature as well. Over $55,000 in purse money was handed out to the Sprint cars -the largest in Pennsylvania for an
unsanctioned race.

In the 25-lap main event for the River Valley Builders Super Late Models, it was point leader Dylan Yoder, of Middleburg, extending his advantage with his third win of the season.

Esh had driven to the front and was in control of the 30-lap main event when the red flag flew with 21 laps completed.

The teams were allowed to refuel and make small adjustments at this time.

Flick was in second for the restart and went after Esh. The two drivers traded slide job after slide job at each end of the speedway. Flick did nip Esh at the line for the lead at one point, but Esh kept
getting back around him.

Esh turned off the second turn cushion driving inside Flick securing the lead off turn two, but another yellow flag and a right rear tire going down was too much to overcome.

Flick got a great run off the turn two cushion and down the backstretch blasting under Esh as they raced into turn three.

From there, it was all Flick as he drove away to the win. Esh was trying to hold onto second. He lost the spot to Danny Dietrich and then fended off Lance Dewease to finish third.

“We just won 12 grand, holy crap,” Flick said. “I wanted to win the (Greg) Hodnett race more, but this makes up for some blown right rear tires there’s no doubt about that. With the tire issues we’ve had, I tried to pace myself. I didn’t want to lose a tire or a racecar. The crew came out on the red and told me all the tires were fine. I knew I could go after it.”

Flick needed some good racing luck to go along with his fast racecar.

“This is amazing,” Flick said. “We’ve been so close so many times. I didn’t want to be a one hit wonder. For it to come on a night like this and the way we were able to do it. It means so much. I know so much of it is luck, but we’ve got a good enough racecar and the team
is confident enough right now that we’re able to put the pieces together when we need to.”

Esh was coming off his first career Port Royal win two weeks ago.

“So close,” Esh said. “We tried to air it up and take the bleeders out so it didn’t bleed any air out of it. We hoped for the best. I thought we were going to be okay until that other caution. The heat
would have kept it up, but with that caution we ran around there for a little bit. As we were getting towards the end there, I was getting tighter and tighter and I could feel it rolling over and I was just
trying to hold on.”

“That was a fun race,” Esh continued. “Kudos to (AJ). He’s had the same uphill battle we’ve had with tires. That was cool to see him get a win, but 10 grand would have been awesome. When you can still get a good finish, keep it in one piece, and have some fun racing, you can’t
beat that.”

Stutts began lapping cars with Esh closing quickly. They were racing around the top and were close in turns one and two as they tried to lap cars.

Esh ducked under Stutts entering turn three sliding into the lead. Stutts spun out in turn four bringing out the yellow.

Flick started third, but dropped to fifth in the early laps. He was back up to third for the restart and passed Blane Heimbach for second. Seventh starter Danny Dietrich raced into third.

Heimbach went back after Dietrich and they swapped third place at both ends of the track before Dietrich secured it.

Esh had a straight away lead with 12 laps completed as the leaders all raced around a very fast cushion. Logan Wagner was up to fourth from 13th starting spot and Lance Dewease into fifth from 15th.

Wagner caught Dietrich and they threw sliders at each other in the corners as well with Wagner taking over third.

Esh led Flick by 1.770 with Wagner, Dietrich and Dewease following with 10 to go.

The red flag stopped the race with nine laps left. Cory Haas blew a tire on the frontstretch and Tyler Reeser drove over some of the debris causing him to lose control and hit the end of the wall at the
turn one track exit. All drivers were okay.

Teams were allowed to refuel and make minor adjustments at this time.

“Phil (Long) made a good call for giving the car a little bit more drive,” Flick said. “Everything worked well.”

Esh and Flick’s wild battle for the lead ensued.

Esh controlled the restart, Flick ducked under him in turn three. They were side-by-side off turn four down the frontstretch with Flick leading the lap. Esh took the lead back with a turn one slider as
Wagner watched closely from third. They traded the lead again in three and four. Esh led again as Flick tried another slider. Esh turned down off the turn two cushion securing the lead for the moment and went low into turn three taking Flick’s line away.

A yellow interrupted the incredible battle with six laps to go.

Flick got a great run off turn two and drove by Esh entering turn three. Flick was gone from there as Esh tried to hold onto second.

Wagner tried a slider on Esh with Dietrich right there. Esh turned down off the cushion again driving between Wagner and Dietrich. Wagner lost some momentum in the chaos as Dietrich got by Esh for second.

Flick’s final margin of victory was 1.5 seconds over Dietrich with Esh holding onto third with a right rear tire going flat. Dietrich earned $5,600 and Esh earned $4,000.

In the first 16-lap semi-feature, it was Flick scoring the $2,000 win. Myers, Stutts, Dietrich and Dylan Cisney completed the top five. Haas, Wagner, Dewease, Jeff Miller and Nicole Bower rounded out the top 10. These drivers locked into the main event with the top three redrawing.

In the second 16-lap semi-feature, Esh passed Heimbach for the lead as they raced under the white flag. He led the final lap for the win. Heimbach, Justin Whittall, Buckwalter and Reeser completed the top five. Mike Wagner, Mark Smith, Ryan Taylor, Tyler Bear and Dan Shetler rounded out the top 10.

Smith won the B-main after ducking back into the pits before the second semi started and then tagging the rear. Rick Lafferty was the 25th starter after receiving the fan vote.

Jeff Rine started on the pole and raced into the lead to start the 25-lap main event for the super late models. Point leader Dylan Yoder was quickly into second with Andy Haus third.

Rine controlled the pace with Yoder slowly closing. Yoder tried the bottom lane to get around Rine, but couldn’t get quite enough drive off the corners.

With Yoder working under him, Rine began to move around the race track and found some speed.

Yoder’s car continued to get fast and after following Rine around the top, they were side-by-side down the backstretch and into the third turn. Yoder came out on top as they raced off turn four completing lap 18 as the leader.

He pulled away from there as Andy Haas took second from Rine over the final laps.

Yoder won by 2.738 seconds earning $2,500 for the victory and has a big 350-point lead in the standings over second place finisher Haus.

“This thing is a lot of fun to drive,” Yoder said. “I got into the wall a couple times, but luckily everything held together. Rine left me just enough room to squeeze around the outside. Once he moved up, he was pretty quick and I didn’t know if I’d be able to get him. He tried the middle one time and I had a good run and got around him. He always races me clean and I try to do the same back.”

Heat races for the 20 late models were won by Rine and Lupfer.