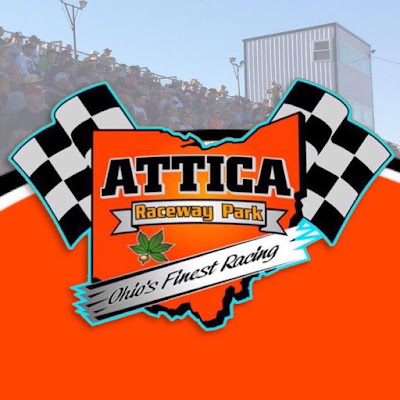 
By Brian Liskai
ATTICA, Oh. - Chris Andrews used a restart with five laps to go to grab the lead and drove to his second 410 sprint win of the season at Attica Raceway Park on Columbus Equipment/Central Ohio Farmers Night, Friday, Aug. 16. The win gives Andrews a little bit of breathing room heading into season championship night on Friday, Aug. 23 as he seeks to wrap up his third Attica championship.

Andrews, from Sandusky, Ohio, admits prior to the red flag on lap 25 of the Callie's Performance Products 410 Sprint feature, he might have been thinking about points as he came into the night with a slim three point lead over Cap Henry with DJ Foos only five points back. In fact, he had slipped to fifth in the feature before Henry and Travis Philo tangled and flipped while battling for second. But, like his first win of the season earlier this year, when the time came to get up on the wheel, Andrews did just that, driving to the outside of Buddy Kofoid on the restart. It was Andrews 9th career win at Attica.

"I've come to the end of the season many times close on points and you think about that non-stop. I road around on the bottom a lot at the beginning of the race and that's not my style. A few guys wrecked out and...shit I wanted to win. I was going to just ride in third and what ever and points race. I don't race as much as I used to but we want to win," said Andrews of his Mackey Motorsports machine.

"I was being a wimp at the beginning running the middle and bottom and DJ (Foos) got underneath me and I started throwing hail Mary's into one and it was sticking and on that restart clean air helped out and the car was good. I have to thank Ken and Duane Mackey and Griff's Engines and the whole crew," added Andrews beside his Griewahn's Concrete/Design Graphics Group/Kistler Racing Products/Scotty's Body Shop backed #25M.

Just as important was the second place finish of DJ Foos and third place to Buddy Kofoid. Both came into the night along with Henry with just one point separating the three for the $10,000 championship of the All Pro Aluminum Cylinder Heads/Kistler Racing Products Attica Fremont Championship Series (AFCS) Presented by the Baumann Auto Group. Henry's misfortune late in the race sets up a dramatic championship battle on the final point night coming up at Fremont Speedway on September 6.

McClure, Ohio's Rusty Schlenk drove around Doug Drown with all four wheels over the cushion in turn four to grab the lead in the Summit Racing Equipment UMP Late Model feature and then held off a late race charge from Drown to score his second win of the season at Attica. The victory places Schlenk in a tie for most career late models wins at the track with Drown, each recording 27. Schlenk now has 204 career victories on his resume as well.

"I have to apologize, I got into Doug a little bit there. He was driving down off top and leaving a lane open up there. I committed that lap and he slid up further than I thought he was going to and we made a little contact. I got out of it and let him straighten it up. I love racing up front with him. I had to come and defend that most wins deal...he had taken that away from me.I have to thank all these guys standing behind me for busting their butts all night for me. I have to thank Velocita Fire Suits, Tom Finch Automotive, Dominator Race Products, Bilstein Shocks, VP Race Fuels, Carillo Rods, CP Pistons, Buckeye Concrete...everybody that makes it possible," said Schlenk.

Fremont, Ohio's Jamie Miller, a former Attica 305 sprint track champion, took the lead on a lap four restart and never looked back. Miller held an eight second lead when he took the white flag and drove to his fourth Fremont Fence 305 Sprint feature win of the year worth $1,000 thanks to Griff's Engines. Miller's 23rd career victory places him in a tie with Bobby Clark for third on the all-time win list for the division at Attica. Miller also took over the point lead for the 305 sprints as defending track champion Paul Weaver suffered mechanical woes.

"We were good tonight that's for sure. Passing was pretty easy. I just tried to stay calm, hit my marks and not get into trouble," said Miller beside his Brad's Barbecue/Pen Monster.com/Sonic Hauling/Napa of Attica/Avon by Angie/Griff's Engines/Color Street by Jaime Hennig/Reedtown Tavern/Fostoria Mod Shop/York Carpet Outlet/Crown Battery/Branham Builders/Imprint Logo/Phil Rister Racing backed #26.
The victory pads Miller's lead in the $2,500 to win KS Sales & Service AFCS presented by Jason Dietsch Trailer Sales.
Philo and Kofoid brought the field to green for the 30-lap 410 sprint feature with Phil jumping into the lead over Kofoid, Cale Conley, Andrews, Shawn Dancer and Foos. Philo began to pull away slightly while Conley and Andrews battled for third. But, six laps into the feature Kofoid started to close on Philo just before Caleb Griffith would drive off the high side of turn two to bring out the caution.

When the green reappeared Philo again pulled away but Stuart Brubaker suffered mechanical issues to bring out back-to-back cautions with nine laps scored. On the restart Kofoid stayed with Philo this time as Conley, Andrews, Cap Henry, Byron Reed and Foos battled for third.Just past the half-way point, Kofoid executed a slider on Philo to take the lead but Philo did not give up and the pair exchanged sliders at each end of the track before encountering heavy lapped traffic on lap 18.

Lapped traffic allowed Conley to close as Andrews fended off Henry and Foos for fourth. It appeared Conley made contact with a lapped machine, breaking the front end of his car and bringing out the caution on lap 22. On the restart both Henry ad Foos got by Andrews, dropping him to fifth. On lap 24 Henry slid in front of Philo and the pair got together entering turn one, sending both flipping. Both drivers were uninjured but that gave second back to Andrews. On the ensuing restart Andrews blasted to Kofoid's outside and took the lead with five laps to go. Foos drove under Kofoid for second a lap later but could not close the gap on Andrews who drove to the win. Kofoid, Reed and Nate Dussel rounded out the top five.

Drown and Matt Irey paced the field for the 25 lap late model feature with Drown blasting into the lead over Irey, Schlenk, Ryan Missler and Mike Bores. Schlenk quickly took second and stayed within a car length of Drown. A caution for a Bob Mayer spin followed by Devin Shiels coasting to a stop kept the field close. On the restart Drown and Schlenk pulled away from the field while Irey, Missler, Ryan Markham and Bores gave chase. Irey pulled into the pits on lap nine to surrender third to Missler with Drown and Schlenk holding an eight car length advantage out front. Schlenk began closing on Drown and used a daring move above the cushion in turn four on lap 12 to take the lead. Schlenk could not shake Drown who stayed within a couple of car lengths.

Schlenk and Drown began picking off lapped machines and with two laps to go had placed all but nine cars a lap down. Drown tried a couple of low moves for the lead the last to laps but Schlenk was just too strong and drove to the win. Missler, Markham and Bores rounded out the top five.

Jimmy McGrath Jr. and Brandon Riehl paced the field for the 25 lap Fremont Fence 305 Sprint Feature with McGrath gaining the advantage at the drop of the green over Kyle Capodice, Riehl, Kyle Peters, Miller, Weaver and DJ Foos. Weaver drove off the track with three laps scored and retired to the pits just as Miller had moved into third. On the restart Miller grabbed second just before the caution flew for a stalled Luke Griffith. When the green reappeared Miller drove to the outside of McGrath to take the lead and never looked back as the feature went the rest of the distance under green.

Miller pulled away steadily as Capodice took second from McGrath while Foos worked his way forward, taking third by lap 14. Miller built his lead to eight seconds with two laps to go and was content to ride behind a tremendous battle for ninth involving three cars, not forcing the issue to put them a lap down. Miller easily drove to the win over Capodice, Foos, Tyler Street and McGrath.

Attica Raceway Park will decide it's 2019 track champions in the Callie's Performance Products 410 Sprints and Fremont Fence 305 Sprints on Kistler Racing Products/Jon Wright's Custom Chrome Plating presents the Mark Keegan Classic on Friday, Aug. 23. Double points are on the line for the sprints with the dirt trucks joining the racing action.

As a member owned co-operative, Central Ohio Farmers is governed by a board of directors made up of area member farmers and leaders. There are over 15 Central Ohio Farmer locations including a fueling station on St. Rt. 53 North in Tiffin.

On April 1st of 1952, Willis "Bill" Early purchased the firm of Carroll & Edwards (the company for which he had been working as a salesman of heavy construction equipment), officially renaming and incorporating his new venture as Columbus Equipment Company. Now, over 66 years later, Columbus Equipment Company is headquartered in Columbus, Ohio. Bill served as the company's president, founder and leader from 1952 until 1988 and was known as a true innovator in the heavy equipment industry.