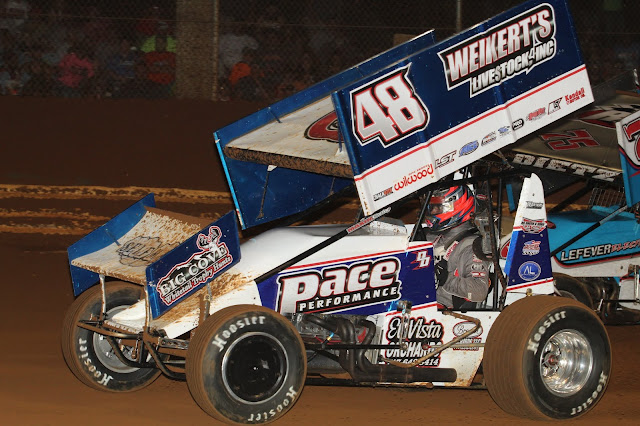 Abbottstown, PA (August 17, 2019) – Brian Montieth went into the night atop the point standings for the season championship. The format of the Valley Supply 30 consisted of two six-lap dashes. The first dash set the first six starting spots for the 30-lap feature. Montieth won the first dash setting him up to start on the pole of the main event.

The second dash finish lined up starting spots seven through twelve with Danny Dietrich earning the seventh starting spot with his win.

After swapping the points lead the previous two weeks, Montieth shared the front row with Alan Krimes. With Chad Trout lining up on the inside of row 2, the top three in points starting in the top three starting spots.

Krimes got the advantage coming out of turn 2 running the high side to lead the first lap.

The yellow flag flew on lap 1 for Robbie Kendall and Adam Wilt who were both facing the wrong way in turns 1 and 2. Both drivers rejoined the field as Krimes led Montieth, Brandon Rahmer, Trout and Ryan Smith to the cone for the early race restart.

Krimes held the lead on the restart with Smith getting past Trout for fourth.

The caution came out again on lap 3 for Brett Michalski who was off the pace in turns 1 and 2. Michalski rejoined the field.

Krimes held the lead again on the restart. Freddie Rahmer was on the move, running sixth by lap 4.

The leaders were all running the top line around the track except Trout who found something on the bottom.

Smith followed and moved to the bottom in turns 1 and 2 to try and catch Brandon Rahmer for third.

As Krimes caught the tail end of the field on lap 12 Montieth closed the gap between the two.

Krimes and Montieth raced wheel to wheel to the flag stand on lap 14 with Montieth taking the lead.

Smith got around Brandon Rahmer for third on lap 15.

Dietrich made the pass for fifth on lap 16 and started to work his way to the front of the field.

As Montieth and Krimes struggled to get through lapped traffic the battle behind them intensified.

Dietrich moved into second with 10 laps to go and challenged Montieth for the lead.

On lap 21 Dietrich got under Montieth going into turn 1 for the lead.

As Dietrich took the lead the Rahmer brothers battled for seventh.

Krimes ran wheel to wheel again with Montieth on lap 24 and took second.

Freddie fell back to ninth with Kyle Moody up to sixth.

Krimes gave it everything to try and get back to the front of the field but it wasn’t enough to get by Dietrich.

Dave Brown and Chad Criswell made up row 1 for the 20-lap feature with Dwight Leppo and Chris Frank lined up in row 2 behind them.

Criswell had the advantage going into turn 1 after the green flag dropped but Brown stayed wheel to wheel with him down the back stretch. Criswell led lap 1 over Brown with a .014 second advantage.

After the drag race to the flag stand the yellow flag came out out lap 1 for Dylan Orwig who got turned around in turn 1.

Criswell held the lead on the restart with Brown, Jeff Rohrbaugh, Todd Rittenhouse Jr. and Chris Frank lined up behind him.

Lap 10 saw Criswell catch the tail end of the field. As Criswell worked on lapped cars, Rohrbaugh closed the gap on Brown. Rohrbaugh was better in the corners and Brown had an edge on the straightaways.

The top three pulled away from field with five laps to go.

Rohrbaugh made a move on lap 16 going into turn 3 to take second from Brown.

Kevin Gutshall sat on the pole of the 20-lap feature with Tony Jackson lined up second.

Jackson took the lead going into turn 1 with Jackson settling into second and Ryan Wilson into third.

Billy Brian Jr. got by Wilson going into turn 1 on the second lap for third and started to chase down Gutshall for second.

Craig Perigo got up to fourth on lap 3 as Jackson pulled away from the field.

Jackson caught the tail end of the field at the halfway point of the race.

Brian was closing in on the leader as Jackson worked through lapped traffic. Brian had the lead down to .312 seconds with five laps to go.

Perigo got around Gutshall to take third on lap 14.

Brian made on last effort to get by Jackson for the lead, but Jackson held on to add his name to the Lincoln record books with his first win at the speedway. Brian finished second and Perigo crossed the line third. Gutshall held on to finish fourth and Steve Wilbur completed the top five.

The first event of the night was the wingless super sportsman make-up feature from June 1.

Billy Brian Jr. started on the pole with Joey Biasi on his outside. Biasi had been quickest in warmups and posed a threat to the veteran pole-sitter.

Brian led the field into turn 1 but Biasi got a nose under him as they drove into turn 3.

Brian beat him to the flag stand by a nose when the red flag came out for Ryan Rutz and Gary Johnston in turn 4.

The red flag flew again on the second attempt to start the 20-lap make-up feature. This time it was for Chris Henry, Tom Savage, Eric Jennings and Chad Masonheimer in turn 4.

The third time is the charm. Brian got out to the lead again with Biasi, Ryan Wilson, Steve Wilbur and Kevin Gutshall falling in line behind him.

Wilbur got under Wilson coming out of turn 2 on the second lap for third.

Eric Walker was running sixth by lap 3 after starting thirteenth.

By lap 10 Carmen Perigo was up to fifth from twenty-second starting spot.

Brian’s lead over Biasi was 3.8 seconds with 5 laps to go as Perigo moved up to fourth.

Brian held on to win and in doing so, set a new track record for the sportsman series. Brian’s 20-lap time of 5:52.540 bested Bobby Weaver’s record set in 2006 in a winged super sportsman. Biasi crossed the line second and Wilbur finished third. Perigo finished an impressive fourth and Ryan Wilson completed the top five.