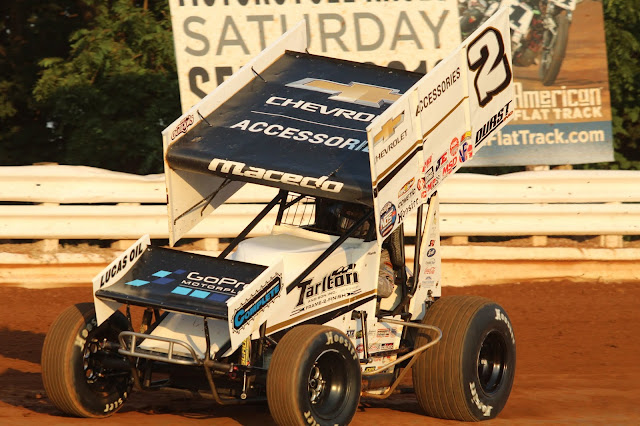 “Last year when I was going to run with the 41-car, a lot of people asked me, ‘Are you nervous?’ No, not at all,” Macedo said. “I’m going to come in there and drive as hard as I can. I’m going to do the best that I can and wherever the cards fall at the end that’s where they are. I’m going to go in this year with the 2-car with the exact same mindset.”

He already has two World of Outlaws wins this season, one at Silver Dollar Speedway and the other at Jackson Motorplex — a track many consider a “smaller Knoxville.”

The Lemoore, Calif.-native called Knoxville Raceway one of his favorite tracks. His performance shows it. Before the 410 Knoxville Nationals last year, Macedo won a preliminary race for the 360 Nationals in his debut with JJR. He then went on to finish second in the 360 Nationals title race.

In the Series’ two stops at the half-mile Iowa raceway in June, Macedo won a Drydene Heat race the first night and scored a top-10 finish both nights.

“The guys that we raced in the two-day show there, they’re the guys that are usually up front at the Nationals, too,” Macedo said. “I think we were there with the guys I would think are the ones to beat. Of course, you’re going to have more guys come in and be really fast. It’s the Nationals. You’re going to get a lot of cars. I have a lot of confidence in our package. I know that everyone is looking to put their best foot forward for that week because between that and the Kings Royal, they’re the two most important races of the year.”

Part of his confidence stems from being paired with veteran crew chief Joe Gaerte, who he’s worked with for the past two years. The two hit it off and found speed out of the box, Gaerte said.

“I can kind of read what he needs and make it work,” Gaerte said. “I know what he’s going to say before he says it.”

Having raced in the World of Outlaws full-time for several years, Gaerte knows how steep the competition gets when they roll into Knoxville for the Nationals.

“I think everyone steps up their game for that race,” he said.

To compete with them, the KLR team has to do the same. Gaerte said there’s a few new things the team has been working on that they’ll try during the Nationals, including a different engine.

With the event filling the grandstands full of fans, filling the town full of campers and filling the pit area with more than a hundred of the world’s best Sprint Car drivers, there’s a lot of pressure associated with trying to win the most prestigious Sprint Car race of the season, and the $150,000 prize that comes with it. Sometimes too much pressure, according to Gaerte.

“That’s just all of the extra people that never come to a race, except Knoxville,” Gaerte said. “You’ve got to contend with all of that. It’s not just what’s going on, on the track, it’s all of the stuff behind the scenes that can be tough to keep it all in order. He’s (Macedo) pretty good with pressure. I think he’ll be fine. I just roll with the punches.”

Macedo concurred that he doesn’t let the pressures of the big event get to him. He’s there to win; yes. But he’s looking to have fun trying, too.

“We’re going to do the best we can and whatever happens, happens,” Macedo said. “I have confidence in this coming up week. I have a lot of confidence in our car, our package and our guys. I’m looking forward to it.”

You can catch all four nights of the NOS Energy Drink Knoxville Nationals presented by Casey's General Stores on DIRTVision.com.

WHEN & WHERE
Wednesday, Aug. 7, to Saturday, Aug. 10, at Knoxville Raceway in Knoxville, Iowa for the NOS Energy Drink Knoxville Nationals presented by Casey’s General Stores. Get tickets and more information.