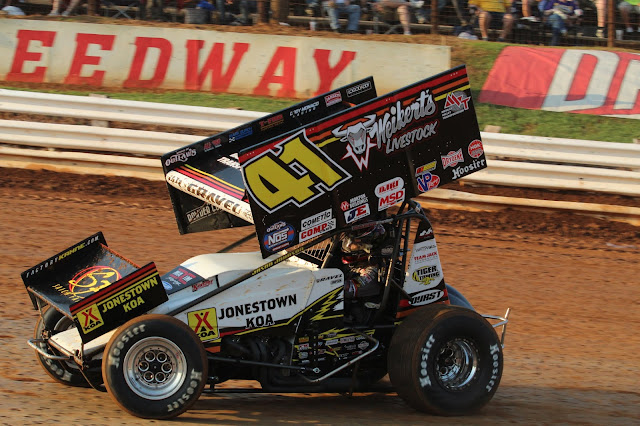 He wanted to keep the momentum going. Keep winning.

“It’s been an awesome year,” Gravel said. “To win the Knoxville Nationals and be strong with a second and third and win here since then, it’s been great.”

The Watertown, Conn.-native faced several challenges en route to his 46th career World of Outlaws victory. One uncontrollable and the others not much more forgiving.

With potential weather approaching the Billings, Mont. area, Features were swapped, cutting teams’ time to prepared by about 20 minutes.

Gravel had the privilege of starting second for the 35-lap Feature – a position he familiarized himself with all night. He finished second in his Drydene Heat race and then second in the DIRTVision Fast Pass Dash.

Logan Schuchart, who finished second to Gravel at the Knoxville Nationals, bested him in the Dash and then bested him on the start of the Feature. Schuchart took command on the initial start, jumping to the lead and pulling away from Gravel.

The Shark Racing driver caught lap traffic by Lap six, but was still able to maintain more than a second lead over Gravel. Both drivers rode the high side of the 3/8-mile track for the majority of the race. But near the halfway point, while Schuchart continued to run high, Gravel transitioned to the bottom.

With 18 laps to, Gravel eliminated Schuchart’s 1.6 second lead and snuck underneath the Drydene No. 1s. The two stayed side by side, wheel to wheel, for the next two laps. Their bumpers traded the lead turn after turn. However, the bottom eventually prevailed.

The Mesilla Valley Transportation No. 41 edged ahead of Schuchart with 16 laps to go.

“Top was kind of dominate all night,” Gravel said. “It was better to be running second there. I found the bottom and took the chance to go down there and it felt really good. I poked my nose on him (Schuchart) one time and luckily I got by him before he knew I was running the bottom.”

Schuchart said he knew Gravel was sneaking underneath him, but thought moving to the bottom would have hurt him rather than helped.

“I felt my car dying down, kind of quit working,” Schuchart said. “I knew he was on the bottom, but it was hard to turn and get back down to the bottom of the racetrack. I felt like if I did try to block him or take his line away I was going to lose more than I was going to gain.”

Ten-time Series champion Donny Schatz followed Gravel’s line, shooting underneath Schuchart to take second on Lap 19. However, lapped traffic hindered Schatz’s charge and allowed Schuchart to power back around him to reclaim the runner-up spot the next lap.

Schatz and Schuchart then dueled as if they were fighting for the win in the remaining 15 laps. Lapped cars continued to bother Schatz, though. Every time he tried to dive underneath Schuchart, a lapped car blocked his exit off the corner.

Gravel faced his own battle with the lapped cars, having to navigate large packs of slower cars at a time. They didn’t slow him down, though. With three laps to go, Gravel had a 4.6 second lead over Schuchart.

Then, in the time it took for a quick flash of lightning far in the distance, Gravel’s lead was gone. A caution came out for a car spun in turn two.

The battle for the lead was going to come down to a brawl between Gravel, Schuchart and Schatz.

When the green flag flew for the final time Gravel showed just how strong he really was on the bottom. Gravel and Schuchart went low into the first turn, but Gravel made better use of the line, pulling away from Schuchart and the rest of the field by several car lengths.

Gravel cruised to the win, adding another floor to the tower of momentum he is building with his Jason Johnson Racing team.

“We were working all night on this car, struggling to find a balance and with the weather and getting this [Feature] done before the Street Stock [Feature] we were thrashing,” Gravel said. “These guys gave me a great race car. Just have to thank them for putting me in contention.”

Schuchart held on to finish second – his seventh runner-up finish since his last win in June – over third-place Schatz.

“Sometimes used tires aren’t bad. Tonight, we put a used one on that was already cut up and I think it just quit working in the middle of the race,” Schuchart said. “It’s really chunked up, ripped apart compared to Dave’s and Donny’s.”

Gravel’s win has inched him closer into the championship points battle. He is now 76 points behind second-place Brad Sweet and 106 points behind Schatz.

To make it a three-way battle for the title, Gravel knows he has to keep his momentum going. Wins help, too.

“Hopefully we’ll keep this up and keep the pressure on the front two guys,” Gravel said.

As always, if you can’t make it to the race in person, you can watch all of the action LIVE on DIRTVision.com.