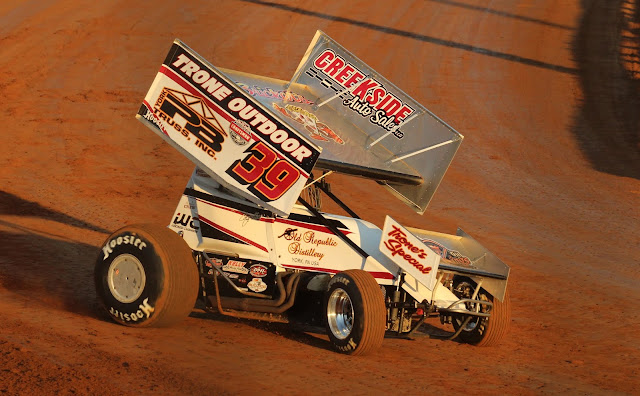 And in the World of Outlaws Late Models main event, polesitter Brandon Sheppared rocketed to the $10,000 victory.

Aboard the Trone No. 39, Haas also started on the pole of his main event and took the lead over Robbie Kendall on the first lap.

The first caution flag of the race came out on lap six, erasing a 2.199 second lead that Haas had built over Kendall and Smith.

Smith used the inside on the restart to get by Kendall for second in the third and fourth turns before another caution flag with nine down for a slowed Adrian Shaffer again bunched the field.

Freddie Rahmer, who started 12th in the field, drove from sixth to fourth on the restart, getting by Kody Lehman and Brian Montieth.

Montieth later withdrew from the event.

Haas was in control using the cushion and seemed to be home free for the win when a final yellow flag again slowed the pace, this time with three laps to go.

Smith kept the pressure on Haas when green replaced the yellow flag but Haas withstood the challenges to pick up his ninth career oval victory by .420 seconds.

It was the York drivers first speedway win of the season.

Heats went to Kendall and Haas.

Outlaws point leader Sheppard drew the pole for the 40-lap super late model main and he cruised to the victory uncontested, wiring the field for his 16th circuit win of the year.

Ricky Weiss drove into second on the second tour and would eventually lose the spot to Shane Clanton on the 25th lap.

Shappard withstood caution flag restarts on laps 20, 24 and 33 to pick up the win that was also the first of his career at Williams Grove Speedway.

Gregg Satterlee raced in fourth spot the entire race but fifth place was up for grabs late in the race as 17th starter Mason Zeigler hooked the cushion to ride into the spot.

Zeigler appeared headed for more when he suddenly slowed and fell backward with nine laps to go before finishing outside of the top 10.

Sheppard ended up taking the win by 2.254 seconds over Clanton, Weiss, Satterlee and Brian Birkhofer.

Dennis Erb Jr. dropped out while running in fifth spot with 16 laps to go.

Covert raced hard with both Satterlee and Erb at times at the front of the pack before fading.

Heats for the 30-car field went to Sheppard, Weiss and Covert with Gary Stuhler taking the B Main.