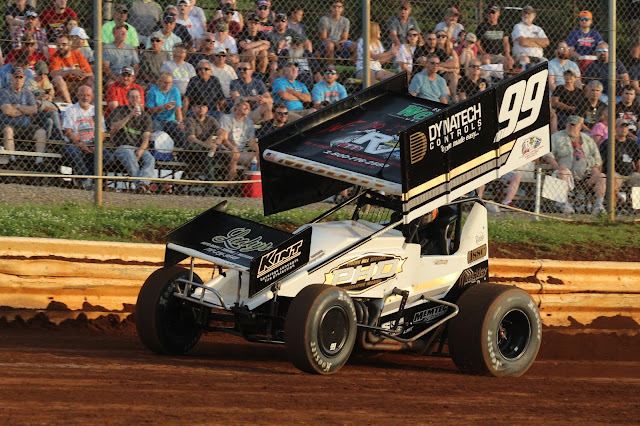 Abbottstown, PA (August 3, 2019) – Kyle Moody is no stranger to victory lane but going into Saturday night he was still looking for his first multi-win season. Moody started on the pole of the 25-lap feature and got out to the lead with Tim Glatfelter running second.

Adam Wilt got under Glatfelter coming out of turn 2 for second and made a run for the lead but Moody held him off. Chase Dietz was up to third on lap 2 from his fifth starting position. Wilt was still challenging Moody for the lead while Brandon Rahmer went to work on Glatfelter for fourth. Rahmer took the spot after passing Glatfelter on the back stretch.

Dietz got around Wilt coming out of turn 4 on lap 3 to take second. Dietz started reeling Moody in. Chad Trout got by Glatfelter for fifth and went to work on Rahmer. Moody entered lapped traffic on lap 6.

The red flag lap came out on lap 8 for an incident in turn 4 involving Clint Ide.

Moody led the field on the restart with Dietz, Wilt, Rahmer and Trout lined up behind him.

Rahmer got to the outside of Wilt on the restart for third but Wilt took the spot back at the line. Brian Montieth battled Trout for fifth with Montieth getting the spot out of turn 2. Montieth found some speed and started to track down Rahmer.

Moody encountered lapped traffic again on lap 14 just as the caution comes out. This time it was for Jay Galloway who spun in turn 2.

Moody led the field again for the single-file restart. This time with Dietz, Wilt, Rahmer and Montieth lined up behind him.

Dietz tried the bottom on the restart and got a good run off of turn 2. Dietz dove low in turns 3 and 4 and nearly took the spot but Moody beat him back to the line.

Montieth by Rahmer for fourth on lap 16. It didn’t take Montieth long to catch Wilt and go to work on him for third.

Moody caught lapped traffic one more time with five laps to go. Montieth took third from Wilt coming out of turn 4 on lap 21.

The yellow came out on lap 21 for Billy Dietrich who came to a stop in turn 4. Dietrich was back at the track in his #8 for the first time since 2017. Dietrich was running in the top 10 when his night ended early.

Moody led Dietz, Montieth, Wilt and Rahmer on the restart with four laps to go.

Dietz was holding off Montieth for second. Wilt dove under Montieth on lap 23 in turns 3 and 4 to take third but Montieth held the spot.

Moody took the checkered flag and beat Dietz to the line by 1.547 seconds. Montieth held on to finish third. Wilt finished fourth and Rahmer completed the top five.

Troy Wagaman Jr. who has been successful in the 358 division at the track, made his 410 Sprint division debut on Saturday night. Wagaman was the fastest car during hot laps with a lap of 13.392 seconds. Wagaman finished fifth in his heat and ended this night with an eleventh-place finish in the feature.

Wyatt Hinkle started on the pole and led the field on the first lap with Alyson Dietz settling into second.

Dylan Norris and Cody Fletcher battled for fifth with Doug Hammaker joining them from his seventh starting spot.

Fletcher took third on lap 3 and reeled in Dietz to take second on the next lap coming out of turn 2.

Race leader, Hinkle, was pulling away from the field while a three-car battle for third ensued between Hammaker, Dietz and CJ Tracy.

The red flag came out on lap 5 for Dietz who crashed in turn 2 after contact with Hammaker.

The field saw another red flag on the restart for Hinkle, who was still leading, as he got high in turns 3 and 4 and flipped.

Fletcher inherited the lead with Hammaker, Tracy, Todd Rittenhouse Jr. and Matt Findley lined up behind him for the restart.

Fletcher went low and Hammaker went high going into turn 1 on the restart. Hammaker had the advantage out of turn 2 but Fletcher led going into 3 and 4. Hammaker took the lead at the flag stand.

Jordan Strickler brought out the caution flag on lap 7 when he stopped on the back stretch.

Hammaker held the lead on the restart with Rittenhouse moving up to third. Rittenhouse tracked down Fletcher and got him coming out of turn 4 to take third on lap 10.

The yellow flag flew again on lap 13 in front of the leaders. Dylan Orwig got turned around in turn 4.

Hammaker led the field to the cone for the restart and held on to win the 20-lap feature by 1.201 seconds over Rittenhouse. Fletcher crossed the line third. Tracy finished fourth and Steve Owings rounded out the top five.

Wes Brown started on the pole of the 20-lap Diz Dean Memorial. Brown took the lead when the green flag dropped with Jimmy Combs running wheel to wheel with the leader before falling back to second.

Chad Stine was running third with Joe Brown and Charlie Summers battling for fourth behind him.

Lap 4 saw the caution come out for Lance Grove who rejoined the field. Stine’s night ended under caution with mechanical issues.

Wes Brown held the lead on the restart with Summers moving into third.

Reamer then challenged Summers for third.

The yellow flag flew again on lap 7 for Grove who spun around in turn 2.

Brown held onto the lead again on the restart. Joe Brown was all over Reamer to take fourth back when the caution came out again on lap 9 for Steve Cantwell Jr. who spun out in turn 1.

Combs stuck his nose under Brown for the lead going into turn 1 on the restart but Brown held onto the top spot.

Reamer and Joe Brown continued to jockey for position with Brown taking fourth. Reamer took the spot back on lap 11 coming out of turn 2.

While running second, Combs spun around after contact with Summers in turn 2 but never stopped so he was able to keep his position. Dylan Brown got collected in the spin out and Joe Brown headed to the pits after getting collected as well.

After the melee in turn 2 Wes Brown, Combs, Jim Rost, Mike Smith, Ron Grove and Steve Cantwell Jr. lined up to restart with 4 laps to go.

Wes Brown and Roland Brown were the heat race winners.