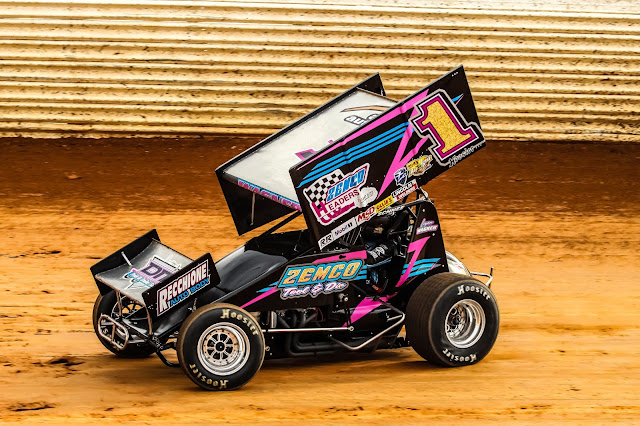 PORT ROYAL, Pa- Usually when it comes to the Pennsylvania Posse vs the World of Outlaws rivalry, it’s all about Sprint Cars. However, Mason Zeigler brought home some bragging rights for the Late Models last night as the Chalk Hill, Pa native passed Ricky Weiss with three laps to go to claim his first-ever Morton Buildings World of Outlaws Late Model Series feature victory Saturday night at the Port Royal Speedway.

"We wanted to keep this one in PA tonight," said Zeigler, who won $10,000 for his efforts. "We've been working towards this for a long time and we got a lot of laps at this place, so I'm really excited to standing here."

Zeigler and Weiss, the leading rookie of the year with the Outlaws Late Models, led the field to the green with Zeigler jumping out to the early lead. It looked to be smooth sailing for Zeigler, as he was ripping around the top of the Speedway, with Weiss and fourth starting Brandon Sheppard in tow.

Zeigler first entered lap traffic on lap 11 and six laps later he got bottled up behind the lap car of Austin Hubbard and allowed Weiss to slide by on the bottom of the speedway in turn's 1 and 2.

Seven laps later Zeigler had regrouped and he pounced again. Still ripping around the top of the speedway, he used momentum exiting turn 2 to pass back by Weiss for the lead again.

"I was absolutely out of control out there and I was just trying my hardest to hit my marks," said Zeigler. "We gave him an opportunity there in lap traffic and I knew we had a car capable of getting him back."

The races only caution flew two laps later when Trevor Feathers got into the turn 3 outside guardrail and came to a slow on the inside of turn 4.

On the restart, it was Weiss striking back as he dove to the bottom of Zeigler in turn 1 and 2, pulling even with him as the powered down the backstretch. Zeigler would diamond turn 3 and 4 and pull back under Weiss to hold the lead on lap 29. However, Weiss used the momentum to slide back under Zeigler and regained the lead with 10-to go.

Over the next seven laps, Zeigler was sizing up Weiss, who also was looking for his first career Outlaws Late Model victory. With 3 to go, Zeigler pulled to the back bumper  of Weiss coming to the flag stand. Zeigler tried a slidejob attempt in turns 1 and 2, only for Weiss to pull back ahead on the bottom of the backstretch.

But this allowed Zeigler to hit the high line in turn's 3 and 4. With Weiss rolling through the middle, Zeigler pulled ahead exiting turn 4 for good to take the lead for what would ultimately be the winning pass.

Zeigler would go on to take the checkered flag by 1.429 seconds for his second overall River Valley Builders Super Late Model triumph of 2019 at the Juniata County oval over Weiss, Sheppard, Shane Clanton and Rick Eckert

"I knew he would have to be really good to get me and I knew if I just hit my marks we’d get him back," said Zeigler. "I was too good on the top and I wasn't about to let this one get away from us."

For Weiss, he was happy to continue what has been an excellent season, but was  ultimately disappointed that he didn't get his elusive first win.

"I thought if I got out front I could run the top, but I just wasn't very good up there," said Weiss. "He was able to run us back down and ultimately he was just the better car tonight."

"I'm soo thankful to be with a team like this and have people who support me and make all this happen." said Wagner. "The car was excellent as it has been all year and I'm just happy to be in this position."

As a result of earning the most points after dual 6-lap heats, Wagner started on the pole with Dustin Baney on the outside front row. Wagner quickly jumped out the early lead over fourth starting AJ Flick and fifth starting Ryan Taylor.

The races only caution would fly on lap 4 as Tyler Bear got sideways in turn 3 and collected TJ Stutts as well. Both cars would be able to re-join the field.

When green flag racing resumed, it was Wagner again jumping out to a sizeable lead. Taylor, using the bottom of turn's 1 and 2 to slide past Flick, set his sights on Wagner as he moved into the second spot.

Wagner would enter lap traffic on lap 10. Before that, Wagner had been trying multiple lines of the speedway, with Taylor catching him and getting to his tail tank on several laps. With a .347 lead at the halfway mark, Wagner knew it was time to make his move.

"I was moving around trying to see where the car was working," said Wagner. "Once I saw Ryan show his nose, I knew it was time to go. I went back up top and just tried to hold on."

With Flick, Dylan Cisney and Jared Esh putting on an exciting battle for the third position behind them, Wagner began to stretch his lead again over the final laps. Ultimately, he would cross the checkered flag by a margin of 1.434 second lead over Taylor, Flick, Esh and Cisney.

"I just can’t say enough about this team and my crew," said Wagner, who expanded his series points lead to 400 points. "Even when we are not at our best, I feel like we can win races. Tonight showed that and we earned this one."

For Taylor, he was looking for his first win since the beginning of the season but was happy with the improvement his team continues to show.

"We found some stuff during the Dream Race and we been working at duplicating that and just being more consistent," said Taylor. "We held our own with Logan and not too many people have been able to do that with them this year. I just got to get better in lap traffic if I want to complete the deal. But I'm happy."