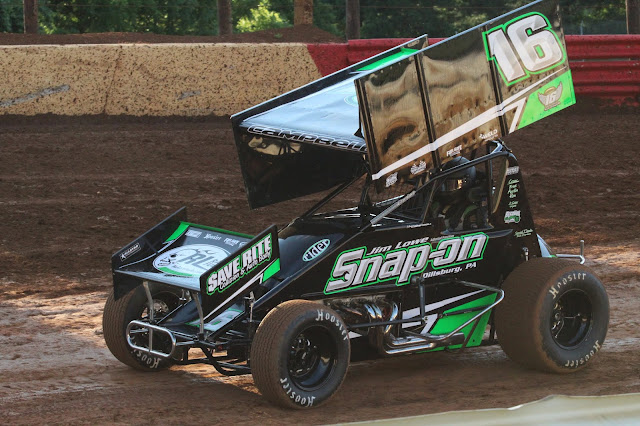 Abbottstown, PA (August 10, 2019) – Campbell has six career wins at the track in the 358 division and was still searching for his first 410 victory at Lincoln.

After mechanical issues last week, track officials didn’t know if the Campbell race team would make it back to the track on Saturday. Matt Campbell and his team are running a limited schedule this year, but they put their big track motor in the #16 machine to race at Lincoln on Saturday night.

To say the plan worked would be an understatement.

Campbell and Justin Whittall shared the front row of the 25-lap feature. Campbell was your race leader coming out of turn 2 on the first lap with Billy Dietrich moving into second. Chase Dietz got around Whittall to take third.

Alan Krimes, who had an impressive run in his heat race working his way through the field without a front wing, was running fifth after starting seventh.

Dietz went to work on Dietrich for the second spot.

After falling back at the start of the race Landon Myers worked his way back up front to battle Krimes for fifth and takes the position.

Campbell made easy work of a lone lapped car on lap 4 as the racing behind him heated up.

Brian Montieth entered the battle for fifth after Krimes took it back from Myers. Montieth went into the night 10 points ahead of Krimes in the overall point standings, so every position counts as they battle for the track championship with the season winding down.

Krimes pulled away from Montieth and Myers to let them battle for sixth. Krimes had his eyes set on Whittall and the fourth spot.

Ryan Smith, who just got back behind the wheel of the #72 machine last week after crashing at Selinsgrove during Speedweek, was up to eighth. It was a three-way battle for the spot as both Brandon Rahmer and Cory Haas were in striking distance.

At the halfway point of the race Campbell held a 1.6 second lead over Dietrich.

Dietrich went to work reeling Campbell in and had cut his lead to half a second on lap 17 when the caution came out for Krimes who was running fifth at the time. Krimes took a ride on the hook back to the pits ending his night.

Campbell led Dietrich, Dietz, Whittall and Myers on the restart.

Dietrich went to the bottom with Campbell going to the top of the track on the restart. Campbell held onto the lead despite Dietrich getting a nose under the leader in turns 3 and 4.

Montieth passed Whittall and Myers in one move to take fourth on lap 18.

Campbell was pulling away from the field with a nearly 2 second lead with five laps to go.

Myers and Dietz battled for third behind Dietrich as he pulled away trying to catch Campbell.

Campbell held on to add his name to the Lincoln record books with his first 410 win at the track. In only his second week back at the track, Dietrich earned a second-place finish. Myers finished third and Dietz crossed the line fourth. Montieth rounded out the top five. 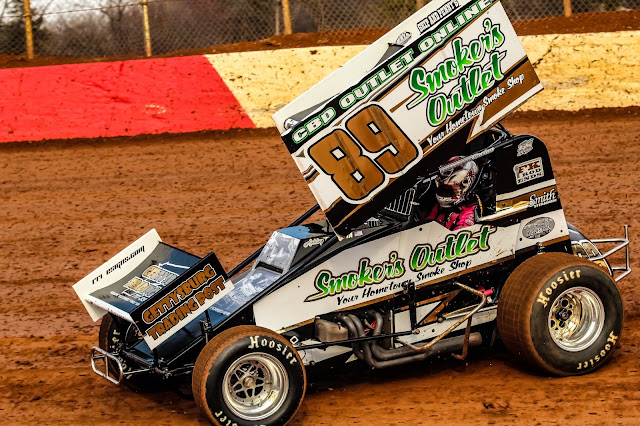 Another name will be added to the Lincoln record books as Ashley Cappetta won her first 358 race at the track on Saturday night.

Cappetta started on the pole of the 20-lap feature with Brett Strickler to her outside.

There was trouble at the start of the race as Chris Frank got over the left rear of CJ Tracy going into turn 1 and flipped up the track bringing out the red. Current point leader Doug Hammaker was also involved but was able to rejoin the field.

Cappetta led the field into turn 1 with Dylan Norris and Strickler battling for the second spot with Norris taking the position.

Cody Fletcher got by Strickler to take third. Tyler Ross went to work on Strickler for fourth and took it coming out of turn 2 on lap 3.

Ross set his sight on Fletcher for third and reeled him in to take it. Next on Ross’ check list was Norris who was running second.

Norris was racing around the bottom while Ross was running the cushion on the high side of the track. Ross made the top work and took second from Norris on lap 7.

Ross then went to work on reeling in Cappetta.

The caution came out on lap 9 for Kody Kinser as he came to a stop on the front stretch just as Cappetta was getting ready to enter lapped traffic. Kinser, Steve Kinser’s cousin, Kelly Kinser’s son, was in town from Indiana to race the New Jersey based 5z machine.

Cappetta led Ross, Norris, Fletcher and Strickler on the restart. Cappetta went to the bottom with Ross sticking with the top line around the track.

The yellow flag waved again on lap 10 as Jordan Strickler stopped with his nose into the guardrail on the back stretch.

Cappetta led the field again to the cone for a single-file restart. Norris got his nose under Ross going into turn 3 but Ross held the position.

Having success running the cushion, Ross stuck to the top line but Cappetta was making the bottom work around the track.

Not making much ground on the leader Ross tried the bottom on lap 12 to no avail and went back to running the cushion on the next lap as Cappetta pulled away.

Ross tagged the wall in turn 2 on lap 18 allowing Norris to get by for second.

Cappetta crossed the line first to win her first 358 feature at the track. Norris held onto second and Ross finished third. Matt Findley was fourth and Brett Strickler completed the top five.

Warehime and Foster lined up the field for a complete restart.

Warehime and Foster raced wheel to wheel down the back stretch with Foster leading lap 1 by a nose at the flag stand.

Haley Kaiser drove up to second and took the lead from Warehime at the flag stand on lap 4.

Kaiser started to pull away from the field as Kable worked on Foster for second. Kable got the spot coming out of turn four on lap 6.

Brad Kling, who won the feature the last time the series was at the track, was up to third from his sixth starting spot.

Kable was closing the gap between him and Kaiser and got a nose under her coming out of turn 4 on lap 9.

It only took Kable one more lap to take the lead. He beat Kaiser to the flag stand by a nose length for the top spot at the halfway point.

With Kaiser running second, Kling went to work and took the position.

Two laps weren’t enough time for Kling to make a move. Kable held on to win and Kling crossed the line second. Kaiser finished third. Justin Cullum was fourth and Foster rounded out the top five.

This Saturday, August 17, Lincoln Speedway is back in action with Valley Supply 30 for the 410 Sprints, 358 Sprints and Wingless Super Sportsman. Racing starts at 7:30PM with pit gates opening at 5:00PM and grandstand gates opening at 5:30PM.