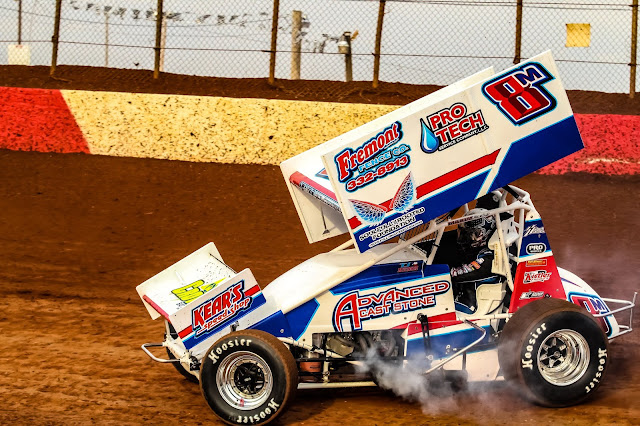 By Brian Liskai
WAYNESFIELD, Ohio - They say you have to be in position to win. TJ Michael was and it led to the biggest win of his sprint car racing career Friday, Aug. 2 at Waynesfield Raceway Park on Tommy Tire Sales/Kear's Speed Shop Night.

With three laps to go, leader Cale Conley was battling with Nate Dussel in lapped traffic when Stuart Brubaker spun, collecting Conley, Dussel and fourth place runner Cole Duncan. Michael, who ran third the entire race, took over the point and drove to the $5,000 FAST On Dirt pay day for the Second Annual Rick Ferkel Classic.

"That one was given to me and there was no way I was going to lose that. I seen I was closing in on the front two a little bit but I didn't want to make a move too early and thank God I didn't because I would have been in that chaos. I've come up the last six years to race against great competition and they've really kicked my butt. I'm just starting to get comfortable in this 410 car and what a great place to win my first race. I have to thank Scott and Chris...they've been working hard all year long. Ever since Doug Berryman has gone and done his own deal with the shocks he really has us rolling," said Michael beside his Advanced Cast Stone/Fremont Fence/Kistler Engines/Big D's Pizza/Crown Battery/Pro-Tech Services/Soulfully Rooted Foundation/Wood Heating & Air Conditioning/Kear's Speed Shop backed #8M.

And while the 410 sprint feature was exciting, the 305 sprint drivers said "hold my beer" and put on a whale of a 25 lap feature with Rawson, Ohio's Ricky Peterson getting a last lap, last corner pass of Brandon Moore to earn the victory by .031 seconds.

"It helped me run that 410 feature and then get back in this thing it's slower reaction time. It helps you to make good split second decisions and I could put the car where ever I wanted. I didn't mean to use up Brandon like that but it was for the win. It's pretty cool to win this in front of a lot of my family and friends," said Peterson beside his Bluffton Diesel Service/Spectrum Salon/Falcon Supply backed machine.

Mason, Ohio's Brad Strunk took the green flag and never looked back in the 25 lap mini-sprint feature. Austin Powell made it interesting at the end, closing quickly but Strunk, Waynesfield's 2017 track champion, fended off the charge.

"I love racing here. This place is so much fun. I had a lot of family and friends here tonight so this is pretty special. A lot of guys say I'm too old to be doing this but I'm having a blast," said Strunk beside his Parsons Construction/NRL Mortgage/Priority National Title/Penn Station/Bowling Carpets/Hud Racing Engines backed machine.

Dussel and Michael brought the field to green for the 30-lap FAST feature but a spin by Peterson necessitated another start which ended up with Jordan Harble tumbling, collecting Dan McCarron. On the ensuing restart Dussel jumped into the lead over Michael, Conley, Lee Jacobs and Cole Duncan.

Conley was able to steal second on lap two but Dussel had begun to pull away slightly. Michael continued to hound Conley as the leaders raced into lapped traffic by lap seven. Conley was able to use the lappers to drive into the lead on lap 11 by a nose at the start-finish line as Dussel raced to his outside and Michael to his inside.

Conley finally cleared some of the traffic but he could not shake Dussel who stayed within a car length with Michael also staying close as Duncan, Jacobs, Travis Philo and DJ Foos gave chase. With 12 laps to go a tremendous three car battle involving Michael, Duncan and Jacobs was going on for third and Conley and Dussel ran nose to tail for the lead.

Heavy lapped traffic once again came into play on lap 19 and again Dussel closed on Conley. With five laps to go it looked like it was going to be a real shoot-out between Conley and Dussel but disaster struck on lap 27 for the front duo. Michael took control on the restart and drove to the victory over a charging Foos, Henry (from 10th), Jacobs and Tyler Gunn.

Jimmy McGrath and Moore brought the field to green for the 25 lap 305 feature with McGrath gaining the advantage. Moore made his move for the lead on lap nine with John Ivy finding speed in the middle of the track taking second a circuit later. Ivy immediately closed on Moore and the pair raced side by side over the next six laps as McGrath was trying to fend off Jamie Miller and Peterson.
As Moore and Ivy continued to battle with seven laps to go, Peters drove into third and began to close the gap on the front two. With three laps to go it was a tremendous three car battle for the lead with Peterson getting into second on the white flag lap. Entering turns three and four for the final time, Peterson got under Moore and it was a drag race to the checkers with Peterson winning by a front bumper. Moore, Ivy, McGrath and Tyler Street rounded out the top five.

The 25-lap mini-sprint feature saw some crashes early but once it got rolling, Strunk pulled away until two laps to go when Powell closed quickly. Strunk would not make a mistake and drove to the win over Powell, Jac Nickles, Jake Hesson and Chris Bounds.

Waynesfield Raceway Park will be back in action Saturday, Sept. 8 for the Bob Hampshire Classic, honoring the hall of fame mechanic. There will be winged 410 sprint cars with the other divisions yet to be decided.

For more information go to www.waynesfieldracewaypark.net on Facebook by liking Waynesfield Raceway Park or on Twitter by following @OfficialWRP.
About Tommy Tire - www.tommytiresales.com

Located in Bluffton, Ohio, Tommy Tire Sales is your one-stop-shop for car, truck, semi and farm tires and tire services. With thousands of virgin tires and retreads on-hand or readily accessible and three service trucks, you can count on Tommy Tire to get you back on the road as quickly as possible. Tommy Tire is also proud to offer no trip charge on the installation of eight or more semi tires. Check out our online catalog for current pricing and real-time inventory where you can quickly and easily place your order.

Kear's Speed Shop was founded by Chuck and Shirley Kear in 1969 at its present location on Market Street in downtown Tiffin. You can build your winning race car and outfit your driver from Kear’s large inventory. Kear’s also has three trucks that service your needs at the local tracks as well as the All Star and World of Outlaw races.
Posted by Bill McIntyre at Saturday, August 03, 2019