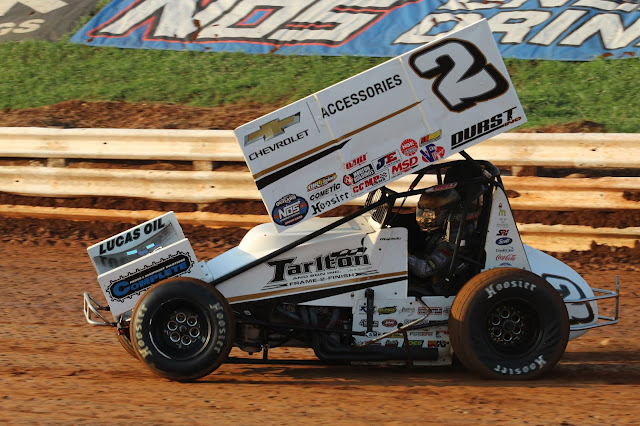 Carson Macedo’s goal entering his World of Outlaws NOS Energy Drink Sprint Car Series rookie year was to run well each week and pick up a couple of wins by the end of the season.

Friday night at Black Hills Speedway for the $20,000-to-win NOS Energy Drink Rushmore Outlaw Showdown he picked up his third win of the season – in his first race at Black Hills – and second top-five in-a-row.

“It’s pretty cool,” Macedo said. “To win races was my main goal. I thought if I could get out here and win some races and at least show I could maybe have the speed to contend at one point that my team would get happy and we could all stick together for a few years. I think we can really build something great here.”

Macedo, of Lemoore, Calif., had speed with his Kyle Larson Racing team all night. He charged from sixth-place to second in his Drydene Heat race. Then followed that up with another runner-up finish in the DIRTVision Fast Pass Dash.

At the start of the 25-lap Feature, Macedo charged after the lead with the aggression of a hungry young cub. Hammering the throttle around the cushion, Macedo stayed side-by-side with polesitter Shane Stewart through the first turn. By the exit of turn two the two left inches between their tires, but Macedo never lifted and launched to the lead down the backstretch.

However, before Macedo could complete the first lap and make the lead change official, the red flag came out for Kevin Ingle flipping on his side in turn two.

When the race went green again, Stewart wasn’t going to let the rookie best him. He shot to the lead in front of Macedo into turn one. Daryn Pittman charged from fourth-place to third down the front stretch and tried a Hail Mary slide job into the first turn to take the lead, but Stewart and Macedo powered by him on the outside.

Stewart then held command of the lead for the next nine laps, putting close to a half of a track distance between he and Macedo. The Oklahoma-native was hungry and determined for a win. His last and only win his year came in June at Nashville Fairgrounds Speedway. But his joyride out front was cut short by a caution for Ian Madsen cutting a tire and hitting the wall with 16 laps to go.

The field lined back up two-by-two. When it did, Stewart chose the outside line. A mistake. Macedo got the better jump on the restart running the bottom and drove past Stewart down the front stretch.

“I obviously should have picked the bottom,” a dejected Stewart said after the race. “I felt like my right rear (tire) needed to be in grip. I slid my tires a little bit on the initial start and let Carson get a run on me. I didn’t want to do that again. My motor stumbled just a little bit, but it was enough for him to get a run on me.

“We haven’t been worth a crap in a long time and we finally have a good car and I flat just threw it away on the restart. Just can’t thank my guys enough. They’ve stuck through thick and thin and continue to work hard. Just messed up.”

Macedo pulled away from Stewart after taking the lead, but in the final few laps Stewart was putting together better laps than Macedo. On the final lap through the final corner, Macedo slid up the track, almost hitting the wall. That allowed Stewart to cut the lead in half.

But time ran out for the KI Crossbow No. 5. Macedo throttled his Chevrolet Accessories No. 2 past the waving checkered flag with a close to half a second lead.

“I was really struggling to get off of (turn) two,” Macedo said. “Then I’d get tight in turns three and four and I didn’t really know what to do. I know we started to fade there a little bit. I tried to keep my pace as best I could. My guys did a really good job. I say it all the time, this sport is weighed on mechanics and they do a really good job.”

Behind Macedo and Stewart, 2019 Knoxville Nationals winner David Gravel charged his was from sixth-place to third – his third podium finish in-a-row.

“I cost our team a win in the Dash,” said Gravel, who finished sixth in the Dash.

If he was able to start at least fourth in the Feature, he said he felt like he could have possibly contended for the win. However, his podium finished helped him gain points on the top two in the championship point standings.

With points leader Donny Schatz finishing seventh, Gravel currently sits 112 points back from the lead. Brad Sweet, who sits second in points, finished eighth and is 26 points behind Schatz.

Macedo had hoped to break into the top-five in points by the end of the year, but knows there’s an uphill battle to do so, sitting sixth in points, 160 points behind fifth-place. However, being able to grab big wins at tracks he’s never been to before, or only a few times, is a big confidence booster.

As always, if you can’t make it to the race you can catch all of the action LIVE on DIRTVision.com.