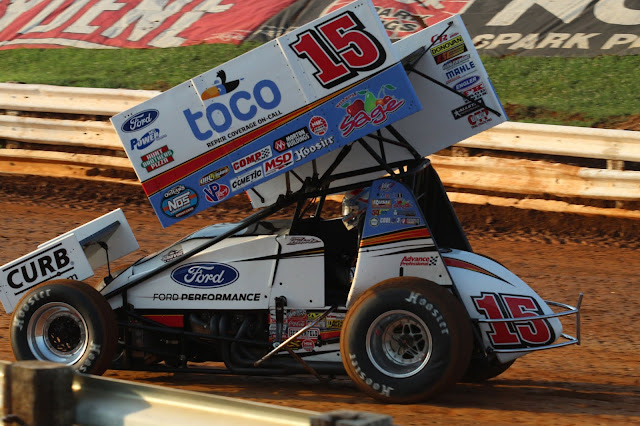 With a dominating win in his home state last week and reclaiming the points lead, the reigning champion is looking to ride the momentum and continue his hunt for an 11th championship on Friday, Aug. 23, at Black Hills Speedway and Saturday, Aug. 24, at Big Sky Speedway.

As the North Dakota-native stated, he put a “whopping” on the field at River Cities Speedway in Grand Forks, N.D. – leading 24 of the 40 laps and lapping up to ninth-place en route to his eighth victory of year. That makes him the second winningest driver of the 16 that have won, so far, this year. However, Schatz feels like he should already have several more wins.

He’s used to seasons with 20 or 30-plus wins. Schatz acknowledge it can be hard to live up to those statistics. But after a couple of years of not doing so, he said it’s started to weigh on him.

“You could say I’ve had a mental block for two and a half years,” Schatz said.

Every race he and his Tony Stewart/Curb-Agajanian Racing are “digging,” he’s said. In Grand Forks they hit on something. For Schatz it wasn’t just with the car either. He felt like his mental block was finally gone.

“I feel like that’s over,” Schatz said. “I can go back to doing my job and doing what I do.”

His win also helped him reclaim the points lead over Brad Sweet – now 24 points ahead of the Kasey Kahne Racing driver. With less than 30 races to go in the Series’ schedule, there’s one main focus for Schatz; the championship. “It’s always been the focus,” he said.

The best way to achieve it is with consecutive good finishes – which he’s had, finishing outside the top-10 only four times – and wins.

Sweet won at Black Hills Speedway last year. He’ll be hungry for another win there after losing the points lead to Schatz, while he searches for his first Series championship. Schatz has won at the South Dakota speedway three time in-a-row, though. Schatz will also be looking to give his crew chief, Steve Swenson, a home state win at the track.

With NOS Energy Drink coming on board to sponsor the event and adding an additional $10,000 to the winner’s purse, there will now be $20,000 on the line, as well.

A wild card race in Schatz and Sweet’s battle for the points lead will be The Brawl at Big Sky Speedway in Billings, Mont. Neither have won at the 3/8-mile track. However, three of Sweet’s 12 wins this year have come on 3/8-mile tracks – making him the winningest driver, so far, this year on tracks that size.

Schatz has yet to win at a 3/8-mile track this year. He’s been no stranger to first time wins this year, though. He won the inaugural race at Nashville Fairgrounds Speedway and won at Wilmot Raceway for the first time in his career in July.

With the mental block gone and the championship in view, Schatz is poised to repeat his River Cities performance his weekend.

Three-time Formula Drift champion Chris Forsberg, who drivers the NOS Energy Drink Nissan 370Z drift car, will be signing autographs in the midway at Black Hills Speedway with his car from 4:30 p.m. to 5:30 p.m. His car will also be used as the pace car for the World of Outlaws Feature.
THIS WEEK AT A GLANCE

WHEN & WHERE
Friday, Aug. 23, at Black Hills Speedway in Rapid City, S.D. for the NOS Energy Drink Rushmore Outlaw Showdown. Get tickets and more information.

ABOUT THE TRACK
Black Hills Speedway is a high-banked, 1/2-mile track. The track record is 14.831 sec. set by Shane Stewart on Aug. 25, 2017.
Online – BlackHillsSpeedway.myracepass.com