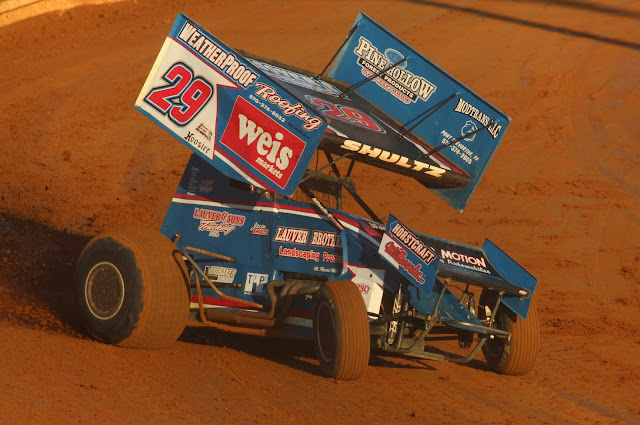 This Saturday, Aug. 17, the speedway will swing back into action at 7:30 p.m. with a program of 360 sprint cars, limited late models, pro stocks, and the annual Roadrunner 20 championship race. Track gates will open at 5 p.m.

The speedway’s final points races for 360 sprint cars, super late models, pro stocks, and roadrunners will unfold at 7:30 p.m. Saturday, Aug. 24, on Foss Jewelers Championship Night. The super late models will also race for points and $2,500 to win in the fourth race of the Grit House Route 35 Challenge Series. Gates will open at 5 p.m.

An even closer points championship will be decided when the Jeff’s Auto Body & Recycling Center super late models return Aug. 24 with a mere 40 points between two-time winner Coleby Frye of Dover and one-time winner and defending champion Bryan Bernheisel of Lebanon.

This season has been one of the most competitive in track history for the super late models with 12 races producing 11 different winners!

Over the Labor Day Holiday weekend, Selinsgrove Ford will be the title sponsor of the Sunday, Sept. 1, Summer Spectacular races featuring the Ray Tilley Classic for 410 sprint cars paying $5,088 to win and the United Late Model Series (ULMS) paying $4,000 to win. Bonus money will also be on the line for the pro stocks and roadrunners when action gets underway at 7 p.m. Gates will open at 4 p.m.

There will be no racing at the track on Saturday, Sept. 7.

The speedway returns Saturday, Sept. 14, at 7 p.m. with the $20,000-to-win Jim Nace Memorial /37th Annual National Open for 410 sprint cars. This year’s Open will offer the biggest winner’s share for an un-sanctioned sprint car race in Pennsylvania in 2019. The PASS/IMCA 305 sprint cars will round out the open when doubleheader. Track gates will open at 4 p.m.  The rain date, if needed, will be Sunday, Sept. 15, at 6 p.m.

For a complete schedule, the latest news, results, and race status, visit selinsgrovespeedway.com or follow us on Twitter and Facebook. The track office can be reached at 570.374.2266.
Posted by Bill McIntyre at Saturday, August 17, 2019