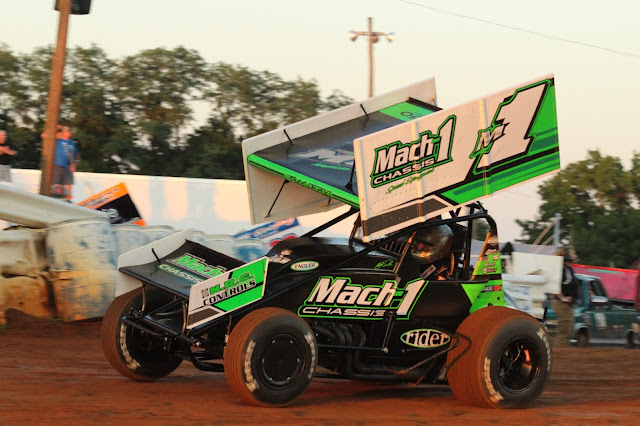 Brandon Moser of Middleburg scored his third straight and sixth of the year in the 12-lap pro stock race, while Brad Mitch of McClure won his second career Roadrunner 20 after a spirited three car battle.

Colby Womer and Mark Smith blasted to the front of the sprint car feature with Smith nosing in front for the lead.  The pair was followed by Mike Walter, Jason Shultz, and Derek Locke.

Smith, who just a few weeks ago competed in the nationally televised NASCAR Truck Series race at Eldora Speedway in Ohio, soon opened a huge lead.

Derek Locke, who has been fast all season, showed some speed and drove to the third spot and immediately challenged Womer for the runner up spot.

Smith went on to wire the field and win the 25-lap grind by three quarters of a lap over Womer, Locke, Kyle Reinhardt and Walter.

“This is an all new car,” Smith said.  “We just finished up this afternoon. That’s why we got here late. It’s next year’s car, so we are going to park it and go back to the old car.”

Sprint car heats were won by Smith and Shultz.

By the halfway mark, T. Miller, who had previously won four pro stock track championships, had built a comfortable lead over S. Miller.

“The kid said, ‘you can’t run as good as you’ve been and not win one,’” Miller said referring to his son who won the last time the limited late models raced at Selinsgrove.  “I knew Shaun was behind me, I could see it on the scoreboard but I didn’t know how close he was so I kept going.”

Moser ran to the finish winning his third in a row and sixth overall over Bachman, Long, Lawton, and Schoch.

Bissinger was able to maintain a slight lead as Brunson and Mitch battled side by side for second.  With Bissinger running high, Brunson ducked underneath coming off the fourth turn on lap six for the lead. The caution flag flew on the following lap for Jim Collier.

Lap nine saw Brunson drift high in the second turn.  Bissinger and Mitch got by him but in the third turn Brunson ducked under the pair to regain the lead.

On a restart on the following lap Brunson and Bissinger traded slide jobs.  Brunson maintained the lead while Mitch took over second from Bissinger.

Lap 12 saw another yellow as Lawton slowed on the track.

Brunson and Mitch had the fans on the edge of their seats racing side by side and exchanging slide jobs with Bissinger right behind.  Lap 17 was disastrous for Brunson who lost a wheel and handed the lead to Mitch.

Brunson’s crew work feverishly and replaced the wheel returning Brunson to the race.

Snook and Mitch were victorious in the roadrunner heats.