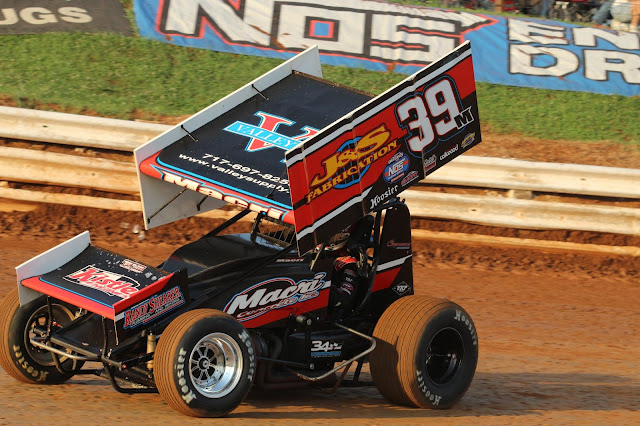 PORT ROYAL, Pa- Juniata County and Port Royal Speedway is all about tradition. With 2019 being the 165th holding of the Juniata County Fair and the 16th running of the Butch Renninger Memorial, it’s safe to say that many fans have attended more than one of the annual events. They have likely seen it all and experienced everything the fair has to offer.

However, fans witnessed two firsts Saturday night. With contenders Rick Eckert and Gregg Satterlee choosing to take the promoters challenge of going to the rear of the field in attempt to earn nearly $8500, Max Blair capitalized on a front row starting spot to lead all 33 laps and pick up his first career Port Royal Speedway victory and his 26th career with the ULMS series.

"I have a lot of people to thank, but I think I really have to thank Rick and Greg for deciding to start from the rear," laughed Blair. "This thing was good, but it certainly helped knowing they had their work cut out for them to get back up there."

In Weikert's Livestock 410 Sprint Car action, Anthony Macri shook off the bad luck bug to pick up his first career Port Royal Speedway victory as well and he earned $3600 for his efforts and continued to build confidence heading into the $52,000 to win Tuscarora 50 weekend coming up next week.

"Man this feels good and I'm super happy to finally get that monkey off our back," said Macri. "I think we found every way to lose these things here. I'm just glad we found a way to finally win one and I'm feeling good about next week."

But the highlight of the night was the ULMS Renninger Memorial race for the Super Late Model Series. With the Tilton Hilton Hard Charger award in honor of Glenn Winnick sitting at 3, 333 dollars heading into the A-Main, track promoter offered all eight drivers at the re-draw the opportunity to go to the rear and if they were able to claim the award, hey would receive $4000 plus their finishing position pay.

Only Eckert and Satterlee, both veterans of many tears, took the bait and both drivers gave up their starting spots for a chance at the money.

Bryan Bernheisel and Max Blair led the field to the green flag with Blair jumping out to the early lead. Blair However momentum would be stopped on lap two as a spin on the backstretch brought out the caution.

Once green flag action returned, it was Blair again jumping out to a large lead with Marvin Winters passing Bernehisel for second on lap three.

However, all eyes were on the two drivers coming form the tail of the field. With the leader hitting lap traffic on lap eight, both Satterlee (eighth) and Eckert (10th).

By lap 14, Eckert had advanced to seventh and Satterlee was in sixth. Meanwhile, Blair was checking out .Eckert made the move to pass Satterlee for sixth one lap later, setting him up to claim the $4000 prize.

On lap 22, Jason Covert slid past Winters for second and he started to try and track down Blair, who is currently the ULMS points leader. As the final laps ticked away, Covert was trying his hardest, but he was no match for Blair on this night.

Ultimately Blair would lead every lap and take home $5442 upon taking the checkered flag by 1.712 second advantage over Covert and Winters. Dylan Yoder and Eckert rounded out the top five, with Eckert claiming the $4000 hard charger award and earning a total of $4850 for his efforts.

"I must've been braindead to decide and go to the rear," said Eckert, who was happy with the check but disappointed not to be in victory lane. "I'm glad we could pout on a show for the fans, but we obviously had a car capable of winning and that was just a challenge."

For Blair, it was a dream come true to finally get a victory at the Juniata County oval. He was  excited to finally make it happen in a prestigious event.

"I can’t believe it! This is going to take a bit to sink in," said Blair. "The car was really rolling off the top, but I just tried to not look at the scoreboard and I just kept watching the flagman waiting for him to say two-to-go."

Or Covert, it was too little too late and he was happy to come home second against a stout field of cars.

"He got put there in clean air and really anymore these days that's the name of the game." said Covert. "I wanted to win this thing, but sometimes second is just as good as a first and we're happy with the run."

"I can't really put this into words quite yet. This is just awesome." said Macri. "We've been so fast and I knew it was just a matter of time. But I was honestly tired of waiting."

Jared Esh and Macri led the field to the green flag, with Esh jumping out to the early lead For the first five laps, not much occurred. Esh led Macri and AJ Flick by a short distance with Kyle Reinhardt and Logan Wagner and Lance Dewease in tow.

Coming out of turn 2, Macri used a slide job to get under Esh. However this allowed Flick to gain momentum on the top of the speedway. Coming down the backstretch Flick passed Esh on the outside and then dove under Macri in turn's three and four. In a drag race to the line, Flick was credited with leading lap five.

Flick attempted to stretch his lead, however  action behind the leader was getting hot and heavy. With close to a 1.0 second lead on lap 10, Macri and Reinhardt were swapping positions behind him and Dewease, who started eighth was on their tail tanks looking to pounce.

Four laps later, it was Danny Dietrich entering the picture. Using a head of steam exiting turn two on the outside of the speedway, Deitrich passed both Wagner and Dewease to move into the fourth position. He continued to march forward with the top six drivers all within 2.0 seconds of each other in lap traffic.

By lap 20, Macri was on the rear bumper of Flick and Dietrich was closing fast as well. Macri slid under Flick in turns one and two on lap 21, but Flick crossed back under him exiting two. Macri would use momentum to get under Flick entering turn three and would lead lap 22. However, Flick wouldn't go away. Coming out of turn two the following circuit, Flick sped under Macri down the backstretch before the red flag flew for a flipping Justin Whittall in turn three, handing the lead back to Macri.

On the restart, Macri once again jumped out to the lead, now maintaining a different line on the speedway thanks to instructions his crew provided under  the red flag. On the white flag lap Dieterich was able to slip by Flick using the middle of the speedway, but by then Macri had secured a large enough to advantage to coast to his first career victory by a 1.340 second advantage

Dietrich, Flick, Dewease and Reinhaedt rounded out to top five with Esh, Wagner, Brian Briown, Dylan Cisney and Heimbach making up the top 10.

"Jim Shuttlesworth came on board after Knoxville and we switched his son's shocks and this thing has been a rocket ship ever since." said Macri. "It was nice to finally cross the checkered flag and not feel like we let one get away."

For Dietrich, he believed he had a car capable of winning and if not for the red flag he might've been sitting one spot better at the checkered flag.

"I think that red flag really helped him as his guys could kind of tell him where to go and such," said Dietrich. "I was really sailing the top and things were about to get really good out there, but I'm happy he finally got his win and we'll look to be better Monday."

Andrew Yoder continued his dominance of the Selinsgrove Ford Limited Late Model division as he cruised from the 10th starting position and passed Ryan Zook on lap 19 to claim the $1533 prize.

"Honestly this car is so good here that I really feel like I have to screw it up to not have a shot to win," said Yoder. "We've had an amazing year at Port Royal and winning these races never gets old."

Eric Hohol and Paul Cursey lead the field to the green flag with Hohol taking the early lead. One lap later Cursey would get turned around in turn one battling for the third position, collecting two other cars and bringing out the caution.

On lap six, Yoder was making it know that he was coming, sliding into the fourth position. Three laps later the leaders hit lap traffic.

The caution flew on lap 10 for a car turned around on the backstretch, once again bunching up the field and setting up Yoder to make his move.

Yoder would slide into the third position exiting turn four on the 11th circuit, but the caution would fly two laps later after three cars got tangled on the backstretch. Another caution would once again fly before any green flag laps would be counted following the restart.

Once green flag action returned, Miller attempted to perform a slide job on Zook in turn's one and two. This allowed Yoder to fly by Miller for second on the outside.

By lap 18, Yoder was on the tail of Zook. For the next two laps he would try and complete the pass using the bottom of the speedway and he would finally take the lead for good on lap 20.

He would go untouched the final five circuits and would win his fourth Port Royal Speedway feature of the year by 2.598 seconds over Zook, Miller, Derrick Garman and Todd Snook. Shaun Miller, Craig Wagaman, Trent Brenneman, Hohol and Cursey would round out the top five.

"The car was jut amazing and it just feels like it’s gliding out there," said Yoder. "I don’t know iff it just likes big tracks, but I jut feel really good out there and I'm happy to win this race."

For Zook, he didn’t want to see those late cautions and thought without them he might've had a shot.

"We definitely didn’t need to see all those cautions toward the end," said Zook. "We were not really good in one and two and we needed open space to be able to hold him off. But we'll take second."

With it getting late in the evening and extra time needed for clean up, speedway officials called the race official as it was past halfway. All drivers walked away safely.