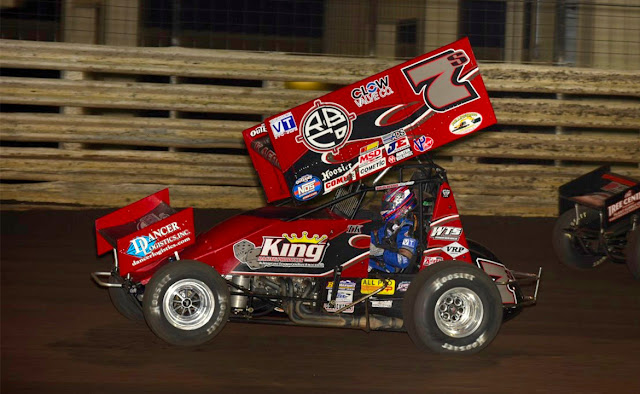 The West Coast swing through September will be the end of Kaeding’s travel plans, he said. But before stepping out of the No. 7s for the final time this season, the San Jose, Calif.-native wants to bring Jason Sides and the Sides Motorsports team to Victory Lane.

“We’ve been so close so many times,” Kaeding said. “I think we’ve left a lot on the plate this year. If we can get a win it would probably make everyone a lot happier. I know we’d probably drink all night and not be able to race the next day, but you know it is something both me and Jay (Sides) want. It would be awesome for us to get a win here eventually.”

He’ll miss the Wednesday, Sept. 4, race at Willamette Speedway, due to running 360 Sprint Car races in California – Sides will be there eyeing his first victory at the 3/10-mile track – but Kaeding will be back to run the California races, starting with the Friday, Sept. 6, and Saturday, Sept. 7, Gold Cup race of Champion doubleheader at Silver Dollar Speedway in Chico. Calif.

Kaeding won at Silver Dollar Speedway two weeks ago with the Northern Auto Racing Club Sprint Car Series and finished second both nights of the Gold Cup last year. He’d like to finish one spot better at least one of the nights this year.

“I think I’ve run second at Gold Cup three or four times,” Kaeding said. “Had a lot of bad luck there for a lot of years. Hopefully we can get past that and get a win in California, especially if my little guy is there. Just to close this season out with Jay on the West Coast is awesome.”

He’s taken a step back from racing the past few years to spend more time with his son, he said. He enjoys the part-time schedule he has with Sides Motorsports but admitted there’s times his son “hates his dad,” due to him being away. His son loves, racing though, he said. They keep in touch through Facetime on race weekends and get the Sides Motorsport crew in on the call to joke around.

Running the part-time schedule of about 30 races helps keep Kaeding on his game, he said, and helps remind him he still knows how to drive a Sprint Car. It also helps Sides and the crew build confidence with good runs, and adds a little extra money in their pockets.

“We all know Jay. He loves Sprint Car racing,” Kaeding said. “He’s a diehard Sprint Car racer. He’s one of the last few guys that still does everything on his own. For me to be able to come in here, it gives him confidence to know his cars are still capable of running up front.”

Having Kaeding around brings an extra level of fun to the team, Sides said.

When Kaeding is around, Sides said he is able to bounce setup ideas off him, which he thinks helps both of them.

The pairing showed speed in their first race together this year at The Dirt Track at Las Vegas with Kaeding finishing second. Since then he’s had five top-five finishes, including a fourth-place run at the Knoxville Nationals and recent fifth-place run at Skagit Speedway.

“They’ve been good every night I get in this thing,” Kaeding said. “It’s a true testament of what Jason does. He is very frugal about things when it comes to his race cars. His race cars have always been fast ever since I started racing with him. Just the comradery we have is awesome because there’s a lot of guys that wouldn’t do this where they bring two cars down.

“We only have one guy half the time with ‘Gravy’ (Stephen Fairfield) and it kicks his butt. That kid, he works his you-know-what off. This thing is like driving a Cadillac sometimes. We’ve shown speed everywhere we go. We’ve had a little bit of bad luck this year at times. But we differently make everyone in the pits know the 7s car can be and is a very vital to this sport.”

While the West Coast swing is currently where his World of Outlaws schedule ends for the season, Kaeding said he’s only a phone call and plane ticket away if the team wants to do more races. He’s already thinking about next year.

“I wish we could continue into next year and do a little bit more, but we’ll have to see what the wintertime brings and what we’re able to do for next year,” Kaeding said.

For the now, the focus is putting the No. 7s back in Victory Lane.

WHEN & WHERE
Wednesday, Sept. 4, at Willamette Speedway in Lebanon, Ore. Get tickets and more information.

Friday, Sept. 6, and Saturday, Sept. 7, at Silver Dollar Speedway in Chico, Calif. for the Gold Cup race of Champions. Get tickets and more information.

There have been four races on a 1/4-mile track, so far, this year.
Silver Dollar Speedway: Carson Macedo won on March 15
Nashville Fairgrounds Speedway: Donny Schatz won on May 31 and Shane Stewart won on June 1
Fairbury Speedway: Kyle Larson won on June 4