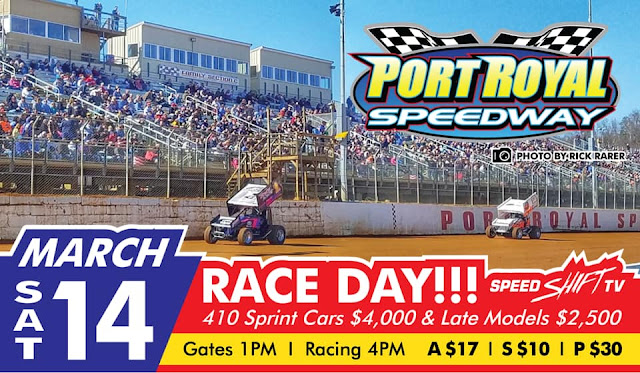 PORT ROYAL, Pa- Following a rare Sunday opener that saw one of the largest crowds in the history of the track take to the stands, Port Royal Speedway returns Saturday with the reappearance of the Weikert’s Livestock 410 Sprint Cars and the River Valley Builders Super Late Models.

Gates open at 1:00 pm with racing set to begin at 4:00 pm. This earlier start time will be in effect for all Saturday racing in the month of March as we attempt to navigate potential cold weather.

This will be of no effect on ticket prices as the fans will still be treated to a general admission price of $17 for adults and $10 for students (13-18). As customary children 12 and under will be FREE and pit admission is $30.

California invader Cory Eliason added his name to the record books last weekend by picking up the 78th Annual Opener and the $5000 prize that came with the checkered flag. While he is set to head out west and won’t be able to go back-to-back, several invaders are expected to stick around to compliment the Weikert’s Livestock 410 Sprint Car regulars looking to break into the victory column for the 2020 race season.

Current point standings have Eliason at the point over Brent Marks, Logan Wagner, Lance Dewease and Anthony Macri.  Once again, Valley Supply, Inc. will offer a $200 Hard Charger award for the 410 Sprint cars and they will continue to do so throughout the entirety of the 2020 racing season.

A similar car is expected for the Late Models and you can expect the who’s-who of the division to be in attendance to try and collect on the increased winnings.

As of right now, the tunnel and infield are still temporarily closed. However, employees have been vigorously working throughout the week to put the final touches on the offseason improvements with a goal in mind of opening them as soon as possible. Safety and appearance remain a priority for all our fans and drivers.

Similar to last week, we will continue to update the fans on any possible changes via our various social media outlets (Facebook, Twitter, Instagram) and website www.portroyalspeedway.com. So, stay on the lookout for potential openings/changes.

After a successful debut that was a big hit with the fans, Hungry Run Wine Cellars will also return to the Speedway this weekend at the log cabin under the front stretch grandstands. They will again be offering wine and wine slushies at an affordable price. Pricing and flavors/options will be listed day of at their stand.

Children 12 and Under - FREE