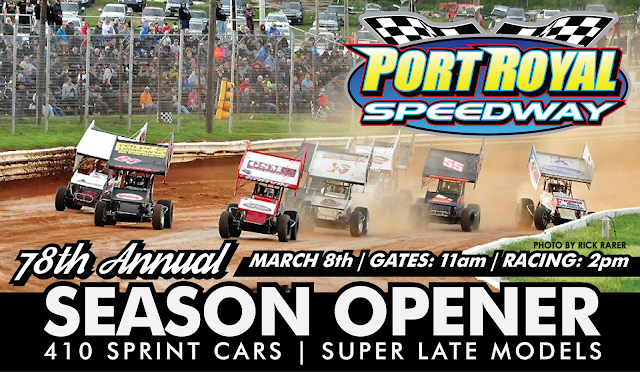 PORT ROYAL, Pa - It’s been 135 long days since the last competitive laps were made at the Port Royal Speedway and the 2019 season ended.

Since then, the only dirt flying has been from the excavating equipment helping to usher in a new decade of racing at ‘The Speed Palace’ with various improvements throughout the Juniata Fairgrounds for the 2020 season.

However, the sound of engines roaring will once again return to the Juniata County oval March 8th as the Weikert’s Livestock 410 Sprint Cars and the River Valley Builders Super Late Models take to the track for the 78th Annual Port Royal Speedway opener.

Utilizing a rare Sunday opener, the Sprint Cars will compete for a $5000 winner’s share, while the Super Late Models will be vying for $2500 at the checkered flag.

Back-to-back defending track champion Logan Wagner, second on the all-time speedway winners list (112) driver Lance Dewease and several other local stalwarts will be looking to add their names into the history books as opening day winners. Several ‘invaders’ are also expected to be in attendance.

The last driver to triumph on opening day and claim the season ending track championship was Todd Shaffer in 2008.

Rine turned his opening day success into a track championship in 2018.

For fans wishing to watch from home, racing activities will once again be available to be streamed live on Speed Shift TV and information/pricing can be found at www.speedshifttv.com

Along with several visual improvements such as the new tunnel, infield additions, a new victory lane and a widened front stretch to include a few, early arriving race fans will be greeted at the gate entryway with 2020 schedule magnets courtesy of Juniata Beverage.

Weather permitting, there will also be an open practice session at the Speedway March 7th from 1-4 P.M. The session is open to any division cars participating at the Speedway in 2020 and grandstand admission is free for any fans wanting to catch an even earlier glimpse of the facilities/cars.