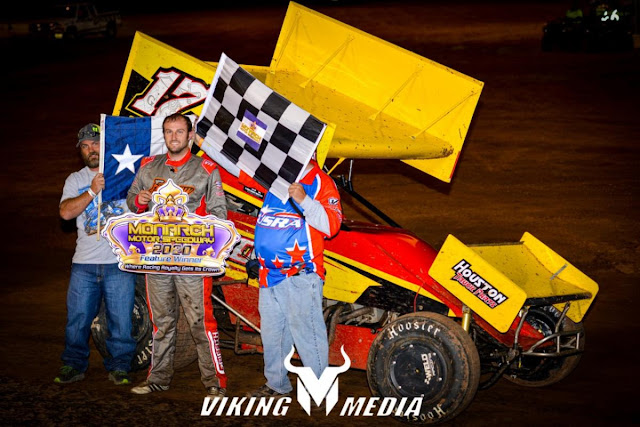 Inside Line Promotions - HIGHLANDS, Texas (May 12, 2020) - Channin Tankersley picked up his first feature victory of the year last Saturday during his fourth race of the young season, marking the second time in the last three years that he has accomplished that feat.

The Old School Racing driver captured both his heat race and the main event during the Sprint Car Bandits Series show at Monarch Motor Speedway. It marked Tankersley's first career triumph at the track.

"It went pretty good," he said. "So far we've had a pretty good year. We've been pretty competitive."

Tankersley opened the night by charging from sixth to claim a heat race, which gave him the most points out of the 40 drivers in attendance. That lined him up on the pole for the A Main.

"Our heat race put us in a good position for the A Main because the track was super burned up," he said. "If you got off the tractor tires you were going backwards. I got a good start in the heat race and thankfully some passes worked out real fast. Someone would slip off the bottom and I'd pick them off. We were trying not to miss the bottom. Thankfully I didn't that whole heat race."

Tankersley made the most of the pole position as he led the first half of the feature.

"The first 13 to 15 laps it was roll around the bottom and hit your marks," he said. "I did a pretty good job of not slipping off the bottom. They got the top really cleaned off and it started to lay rubber down. John Carney II found it first and was able to capitalize. He got around me on a restart about halfway. Sometimes it's not good to be a leader on tracks like that. My game plan was to hit my marks and roll the bottom until I got pressured. It happened so fast and he was able to get around us."

A late-race restart bunched the field up with Tankersley getting a shot at the leader. He chased Carney II for the top spot before making the race-winning move in turn two with a handful of laps remaining.

"We had a caution with about five laps to go and I got a really good restart," Tankersley said. "The rubber started moving toward the middle and bottom of the track. He'd been rolling the top where the rubber started and it started moving down. He hit his marks, but with the rubber laying down the middle it was enough to get beside him and we were able to regain the lead to take the win."

Tankersley has t-shirts ranging from youth medium to 4XL for sale at his race trailer.

"Jeff with Challenger Drilling has been helping me since 2012 and has been a great asset to our team," Tankersley said. "I really appreciate his support."

*PHOTO BY VIKING MEDIA*
Posted by Bill McIntyre at Wednesday, May 13, 2020