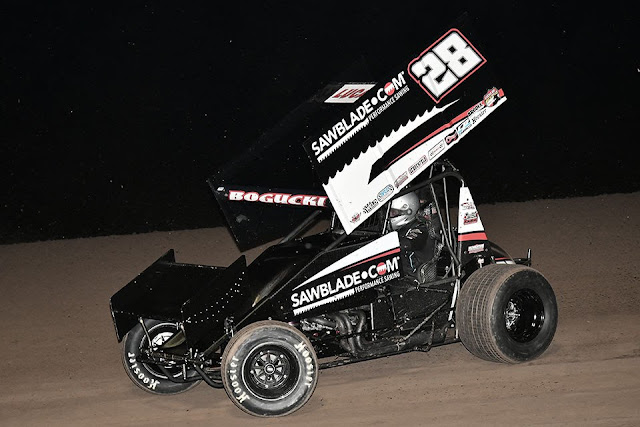 The SawBlade.com backed driver qualified ninth quickest, won a heat race and placed eighth in the dash to line up on the outside of the fourth row for the main event at the oval in Mesquite, Texas.


"We worked on it trying to get me comfortable," he said. "I tried some things I hadn't tried before and it worked. I'm actually excited to get back there in a 360."

Bogucki rallied from eighth to third in the feature, marking his career-best finish in 410ci sprint car competition in the United States.

"It was cool," he said. "I feel like we can compete with those guys. I do the setups by myself and have people helping me crew. With the right circumstances I think we can run up front."

Bogucki continued on the Cometic Gasket Thunder Through the Plains presented by Hercules Tires tour on Thursday at Southern Oklahoma Speedway in Ardmore, Okla. He qualified 15th quickest and advanced from fifth to fourth place in a heat race before ending the night with an 18 th-place outing in the A Main.

"I got the car too tight and I burned the brakes off," he said. "The pedal was on the motor plate. We ended up pulling in early."

Bogucki ventured to Monarch Motor Speedway on Friday. He qualified third quickest and finished sixth in a heat race, which locked him into the dash.

"We were good again and I was running fourth in the dash when it broke," he said. "That ended our week."

The oil pump broke to create mechanical woes during the dash. Bogucki was unable to start the main event and it cut his time with the All Stars short.

"It was good to get back out there and get my partners the exposure they deserve," he said.

Bogucki will take this weekend off before resuming Lucas Oil ASCS National Tour action June 25 at Caney Valley Speedway in Caney, Kan., and June 27 at I-30 Speedway in Little Rock, Ark.