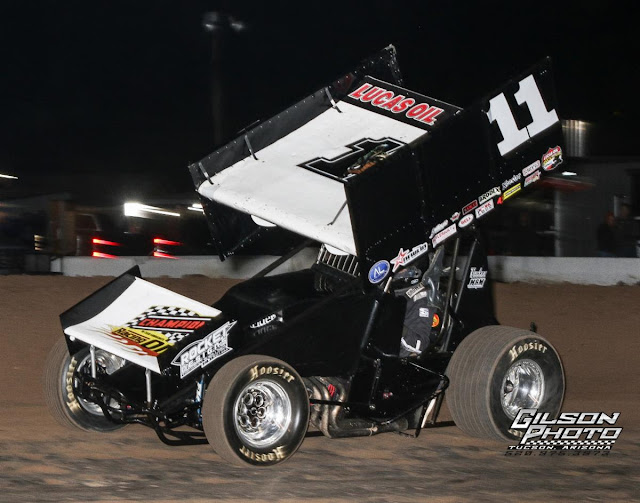 Crockett kicked off the Ollie's Bargain Outlet All Star Circuit of Champions presented by Mobil 1 event by qualifying 10th quickest at the oval in Wichita Falls, Texas. He then placed second in a heat race to garner the seventh starting position for the main event.

"We were good right out of the box," he said. "It was good in hot laps and in qualifying. I could have had it a hair better in qualifying. The times were so close a minor change would have netted us a lot of spots, but it still put us in a good position.

"I felt really good in the feature. It felt good to be knocking on the door battling with the guys running second and third."

Crockett picked up a handful of positions to finish fourth, which was his best outing of the season.

The strong run came on the heels of another great finish during the Cometic Gasket Thunder Through the Plains presented by Hercules Tires opener on June 5 at Red Dirt Raceway in Meeker, Okla. Crockett qualified 21 st quickest, placed seventh in a heat race and ended fourth in the B Main before hustling from 22nd to 14th during his debut at the oval.

"That place is really wide and really racy," he said. "We made some headway running the bottom and having some patience. The biggest thing there was getting the feel for the 410. Other than Knoxville I haven't run a 410 race in a few years. It was nice to put together a strong run."

Crockett also raced with the All Stars on Saturday at LoneStar Speedway in Kilgore, Texas, where he placed 11th in the feature.

"I didn't get the start I needed in the heat," he said. "We were plenty fast enough, but I didn't get a good start and we finished second. The same thing happened in the feature. I got a bad start and spent a little too much time not running where I needed to run. Once I got going our lap times were top-five worthy, but we didn't have good track position. It was tough to pass. But the car handled good so we were happy with it."

Last weekend wrapped up on Sunday at Chatham Speedway, where Crockett's night ended early with an 18th-place finish.

"In hot laps I felt pretty good and I think we were 10th quick, which wasn't bad," he said. "I didn't get the memo you needed to be right on the bottom during qualifying. I overdrove it and was on the gas too hard. We didn't qualify well at all. In the heat race we finished where we started. Then in the main I got the car better and felt decent, but we developed a fuel leak.

"I had a lot of fun and we learned a lot the last week. The All Stars make it great. It makes us want to run more 410 races."

"AL Drivelines speak for themselves," Crockett said. "A lot of racers use them. It's a lot smoother in the car and definitely a good change we've made."