Dominic Scelzi Finds Speed, Consistency and Victory Lane During All Star Thunder Through the Plains 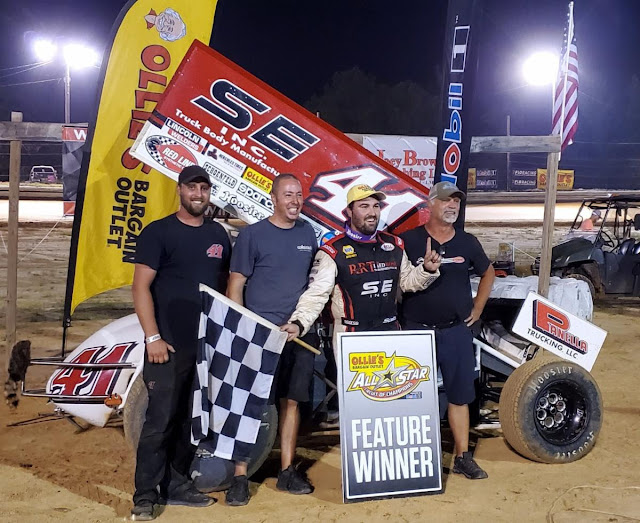 Scelzi earned five top fives, won the finale and finished fifth in the Cometic Gasket Thunder Through the Plains presented by Hercules Tires standings after participating in eight races during that span.

To be honest I think the speedweek was the perfect thing we needed," he said. "We needed to race a lot in a short amount of time at a lot of tracks. At the beginning of the week we weren't there. We'd click off a lap in hot laps and then wouldn't time in well. The last half of the week I feel like we were the best car."

That showed on Sunday at Chatham Speedway during the Thunder Through the Plains finale. Scelzi qualified third quickest, placed fourth in a heat race, charged from sixth to second place in the dash and then led 32 of the 40-lap main event for his first career win with the series.

"It's right up there with winning the World Challenge for me," he said. "It's something I didn't think would be possible. To win with the All Stars, it's an elite group of guys. I feel like it's harder now than it's ever been to win an All Star race. The level of competition is tremendous. It's something I'll never forget."

"I felt pretty good, but I couldn't tell where we were at in qualifying," he said. "I felt like we were going to be all right though. We won the heat and were pretty good in the dash. In the main event I think I gave the race away by not getting to the top fast enough. I got flustered, but got my head back down and kept fighting. It's a good feeling when you roll around well like that."

The team posted a fifth-place result on Friday at Monarch Motor Speedway in Wichita Falls, Texas, and a third-place run on Saturday at LoneStar Speedway in Kilgore, Texas, prior to the big win. Additionally, Scelzi finished 16th at Red Dirt Raceway in Meeker, Okla., on June 5; recorded a fourth-place outing at 81 Speedway in Park City, Kan., on June 7; placed 14th at Lawton Speedway in Lawton, Okla., on June 8; and earned the Hard Charger Award for passing the most cars after driving from 20th to 13th at Devil's Bowl Speedway in Mesquite, Texas, last Wednesday.

"I think you can always get better," he said. "I think the biggest thing is cutting down on mistakes. I've done that this week. If we want to get to that next level of winning a World of Outlaws race, those mistakes can't happen. I think we're pretty close."

Scelzi plans on heading back to his home state of California this week to drive for Roth Motorsports on Saturday at Keller Auto Speedway in Hanford during the King of the West-NARC Fujitsu Series season opener.


Saturday at Keller Auto Speedway in Hanford, Calif., with the King of the West-NARC Fujitsu Series

"Scelzi Enterprises is a family business that has been around far before I was born," Scelzi said. "Now I have a role there. It's my daily job and something I really enjoy being a part of. It gives me a lot of pride to represent our family business on the side of our race cars."

*PHOTO COURTESY OF ALL STAR CIRCUIT OF CHAMPIONS*