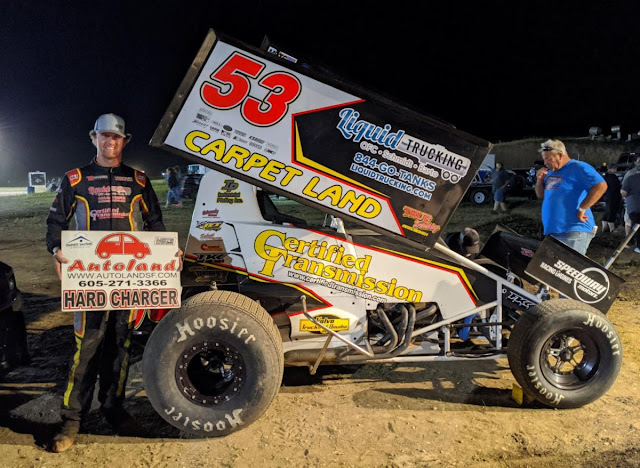 Dover won a heat race from second and was slated to start the Midwest Sprint Touring Series main event on the inside of the second row, but he was challenged to keep his four-race winning streak alive by starting last.


Dover lined up 24th and maneuvered through the field on a challenging track before he finished in the runner-up position by less than one tenth of a second.

"It sucks because we don't keep our winning streak going, but to do what we did on a rubber track was awesome," he said. "If I wouldn't have committed to doing it earlier in the week I probably would have started where I was supposed to in third because of the track conditions. It started rubbering down in the 305 race before us.

"I waited for people to slip out of the rubber or I'd hit the corner right to get underneath them. I took it easy on my tires and waited for other people's tires to go bad. I was patient and waited it out until things happened to other people. Once I got to fifth I started taking it easy because I knew my tires were bad."

Dover had resigned himself to finishing third before a wild last lap nearly led to another win.

"We were coming to the checkered and I was running third," he said. "Entering turn three the second-place car's tire popped and I snuck underneath him. Then the leader's tire popped out of turn four. At the finish line I didn't know who won. He ended up winning by 0.088 of a second. When I was entering turn three after taking the checkered flag one of my tires popped. We got the right amount of laps on it.

"I want to thank Cressman Sanitation. They gave me a bonus for accomplishing what we did."

Dover wrapped up the weekend by tackling a Sprint Series of Nebraska race at The New Raceway Park on Sunday. He won a heat race from fourth and finished the night by guiding Chris Roseland's 305ci sprint car to a third-place outing in the A Main.

"We were supposed to start eighth, but got out on the track late and were penalized to 10th," Dover said. "We missed the setup big time. I don't do that very often. I didn't have the car tight enough. I was way too free. I started hitting the bottom good and that's when I started passing cars. Once I got to third we were pretty even with the first two cars.

"Any time I go to a race I'm hoping for a podium finish. Considering we've been in the top five in all of our seven races this year that's a pretty good start to the season."

Dover, who now has six podium finishes in a row, plans to pilot a 360ci sprint car owned by Chris Bowers this Friday at Jackson Motorplex in Jackson, Minn.